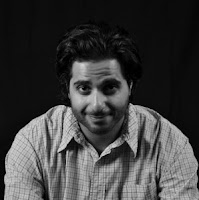 Today we have an interview with A H Amin to celebrate the release of his futuristic thriller, Psychs.

A H Amin was born in Iraq, and he had lived most of his life in Kuwait. He studied dentistry in Emirates in his first years and then he continued in Egypt.


He had first come across his talent when he met a group of students in Emirates who were discussing the making of a movie. After seeing how his ideas had impressed them, he started to take a little interest in literature. He came up with the idea of a new fiction thriller, Psychs, which is his first published book, after he received good criticism about his new idea.

At present he continues to write the Psychs series, with the second one entitled The Remnant just around the corner and a new fictional short story inspired by true events that happened in South Africa.


A bit of both actually, I plan the characters, give them their personalities, place them in a location and then I let them take control. Having these many personas every time I write is what keeps my story moving, sometimes toward shocking results.

They can’t, because they are competing with each other, so eventually when a character hugs a lot of the reader’s attention that’s when you’ll see a shift in the scale. It helps my story actually, having two main characters competing over who will become the favorite.

I wish you didn’t ask me that, I’m on a diet… Stranded on an island I’d say… Pasta with tomato and Alfredo sauce.

I’m a morning person… I like being in the sun and seeing the world clearly.

I dream of going to Japan. It has history, nature, culture and technology in one place.

Yes, there are parts in the story where one of my main character’s previous life is shown in the form of flashbacks, spending time studying Psychology in Liverpool was one of the places distant to where they are.

Not while writing, but a lot of my ideas came to me while I was listening to music, it helps imagining the scenes and it’s a very good stimulus to my subconscious; best ideas originate from our subconscious since our conscious is too busy with our reality.

Well, ‘Psychs’ is mainly a fantasy thriller, our protagonist has eight spirits connected to him by the tragic even of his birth, so as he grows his path morphs with him and he will chose to use those spirits to his advantage, he’ll try to gain experience from them and with them and while doing so he’ll find him self facing death repeatedly and he will be wishing a lot for a miracle… other than the one he has.

For more info on the book, check out the book spotlight:
http://booksandtales.blogspot.co.uk/2012/09/book-spotlight-psychs-by-h-amin.html

I learned that time is a main factor in the process of becoming a published writer, patience and dedication is what brought me to where I am right now. I learned never to race time and to try to be less hasty. But to be honest I’m still working on that last one.

Leonardo Da Vinci said ‘Art is never finished, merely abandoned’ meaning there’s always something to add, so of course, I’ll find my self rethinking and reimagining some small bits. The hardest part for me when I write is finding the courage to abandon my story at the end.

My first influence is my father, he is an Engineer and a writer himself too, my brother, whom I based the main character on and of course, many other writers out there have helped in conditioning my talent to be better through their writings. Like James Patterson, Paulo Coehlo, Dan Brown, Matthew Reilly, and Charles Dickens.

Patience when you condition your idea, otherwise you’ll waste what could have been the best work of literature, also, write, write, write, and then write some more, the best author in the world could be out there and we may never know about her or him, because he or she was too lazy to sit down and write.

My favorite book would be the Alchemist by Paulo Coelho, but my favorite writer is James Patterson.