We have both read a tremendous number of books over the years from the classics to contemporary. That said… what influences our writing today? TV series.

The Bates Motel: We didn’t even see this show until we were done with Book Four. We adore how the town of White Pine Bay in the show, has almost become like a character in the story. We see a similarity with our character Onyx Webb who also lives in a remote town on the Oregon Coast, called Crimson Cove. A fictional town of course, but based on a place we visited near the Haceta Head lighthouse.

Downton Abbey: A big part of Onyx Webb is family drama. It’s partly why we joke we’re writing a supernatural soap opera. There is betrayal, revenge, love and loss around one family in particular- the billionaire Mulvaneys. And so the family drama of Downton Abbey heavily influenced us – not in terms of exact characters or story lines, but just as inspiration. Our story has a lot of mystery around the eldest Mulvaney. It comes down to the theme of: who we are based on where we come from and how that plays out in our lives.

American Horror Story: When we watched Season One, Murder House we were so inspired by its cutting edge brilliance and it gave us courage to continue with our idea of writing three (sometimes four) interweaving storylines. We also loved the series because of the ghosts who were just like the living and that is one of the fundamental pieces to Onyx Webb. A ghost that operates on the living plane. The AHS creators are who we dedicated Book One to.

The Americans: This is such a fast moving series and the storylines are fantastic. We find inspiration here to keep our stories moving quickly. By doing so it gives the story that ‘thriller’ feel. We don’t dwell anywhere for very long. We could spend pages and pages describing the lighthouse on Crimson Cove or the basement of the Child Snatcher of St. Louis… but instead we just let the readers paint all that themselves. Our rule for writing scenes something we learned writing movie scripts: come in late and leave early.

There are so many more but those are just a few. So it has been a great compliment that people say they feel like they are watching a show while they read… that was our goal! 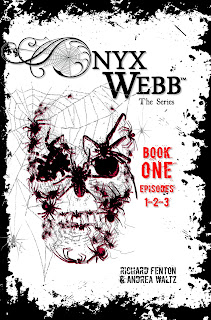 A multi-genre mash-up that combines elements of supernatural suspense, crime, horror, romance, and more. The Onyx Webb series follows the unusual life of Onyx Webb along with a central group of characters in various locations and times. The billionaire Mulvaney family, piano prodigy Juniper Cole and her brother Quinn, paranormal show hosts Cryer and Fudge, and a few others make up the core of the series.

Written like a book version of a supernatural soap opera, each character’s story moves forward with most every episode. It may appear that the characters are entirely unrelated and yet episode by episode, the connections will become clearer. Like being an inch away from a spider web, with each book, the web will move further and further away revealing the full story of every character and most importantly, the stunning conclusion for Onyx Webb herself.

Richard Fenton & Andrea Waltz are best known as the authors of Go for No! (which hit #1 on Amazon’s Sales & Selling list and has remained in the Top 10 for the last five years.) They are also professional speakers who speak internationally to audiences on how to overcome fear of failure and rejection.

Although all of their business books are fables, the Onyx Webb series is their first serious dive into fiction.

But Richard and Andrea have been in love with creating stories together since they met almost twenty years ago and even spent some time in Hollywood writing screenplays, being represented by the producer of Breakfast at Tiffany’s.