From an ancient battle comes a forbidden love … and the chance to hope again.

Destined to destroy vampires, or refuse and be executed, seventeen-year-old Julia Kirkwood finds herself drawn to two things: a life of partying and rebelling against the law, and Clay Blackwell. The trouble is, Clay happens to be the son of the Lumince high priestess, the leader of a race of peace-loving vampires, and Julia’s father’s unspoken enemy. For Julia isn’t just a Reaver, she’s the daughter of the Reaver Chief. And Julia’s father is furious to discover she’s secretly dating and falling in love with a Lumince, particularly after an attempt at peace crumbles in bloodshed.

When her father intensifies his attack against the Luminces, endangering the lives of Clay’s people, Julia’s forced to take a stand. She must choose to accept her destiny as a Reaver, or claim her heart and find the inward strength to declare war against her own flesh and blood. Interwoven with her fate are the ramifications of a love story as forbidden and passionate as her own: the ancient romance that sparked the creation of Reavers and Luminces, igniting this centuries-old feud. Will Julia’s feelings for Clay be enough to transcend centuries of love-turned-hate? Or will their final hope for peace be incinerated in a fiery war? 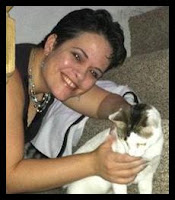 
Michele is a recovering demon (AKA attorney) who left the legal field to follow her dreams of writing and teaching college-level English. In her spare time, she enjoys traveling as far as her credit card will take her, reading an assortment of fantasy and paranormal, and playing with her frisky animals (two black cats and two loud-mouthed cockatiels).

She’s loved vampires since she was four, when her BFF confided that her older sister was a vamp who enjoyed drinking blood. Like any four-year old, Michele thought this was the most awesome thing ever. Michele currently lives in Modesto, California, but will move to Santa Barbara to begin a Ph.D. program in education and literacy this fall.


An excerpt from chapter 2, Clay’s POV…

“D’you ever wonder,” Julia’s fingers glided along her cat’s back, blazing a path into its fur, “if there’s a place so far away, it just has to be perfect? That –” she sighed, “that maybe if we traveled far enough, we could – I don’t know, we could maybe cut around the bull shit and the lies and just live the life we’re supposed to live? Free of everything but the truth and ourselves?”

Clay tilted his face toward the stars. “Maybe. If there’s a place far enough away.”

“Sometimes I feel like there has to be.” She pulled her gown around her legs, letting the material drift against her skin. “Otherwise, what the hell else is there?”

“Mrow,” agreed the cat, nuzzling its cheek against Clay’s hand.

“Nice cat.” Falling onto the deck, Clay scratched behind the creature’s ears. “What’s its name?”

“Pandora.” Julia pushed herself to her elbows, causing the feline to fall onto her lap with a startled mrow. She smoothed her apologies against its fur. “Named her after a story my mom told me once. When I was a little girl.”

His heart sprinted as he stared into her eyes: stained with starlight and sparking with secrets, they grabbed hold and wouldn’t let go. “A story?”

“Hmm.” She nodded. “About a girl who just couldn’t take no for an answer. She opened this box she wasn’t even supposed to touch, and let out all the dark, evil things of the world. Anger. Jealousy. Spite. Malevolence. Everything bad. Until she got smart and slammed the lid shut, trapping just one thing inside. You know what that was?”

Julia tilted her face to the heavens. “Hope,” she murmured, her answer mingling with Clay’s whispered: “Hope.”

A crease formed between her brows, and she lowered her gaze to skewer Clay with her fiery stare. “Thought you hadn’t heard the story, Lumince?”

Clay shrugged. “I’ve heard it. I just wanted to hear you tell it.”

The starlight faded from Julia’s eyes and she reached for her bottle of champagne. “Aren’t you breaking the rules? Coming out here to talk to me?”

“Yeah, you know.” Curling her hand around the bottle’s neck, she lifted it to her mouth in a fluid yank. Her throat spasmed around the rush of alcohol; plunking the bottle onto the deck, she moistened her lips and leveled him with her stare. “Should any vampire be caught keeping company with a human,” she air-quoted the law with her fingertips, “that creature will suffer no less than two years in a Reaver-run penitentiary and –”

“And no less than thirty lashes of a pinewood whip.” Clay tugged his fingers through his curls, swallowing a sigh as Pandora curled onto his lap. “I know the law.”

“Then why are you out here talking to me?”

There was a dare in her eyes, in the way she pushed her fingertips against his hand; capturing one between his fingers, he held it in his grasp. “Last I checked, Reavers didn’t exactly qualify as human. Or have the laws changed again?”

Julia arched a brow. “Nice,” she drawled, twisting her fingertip from his hand. It fell against his arm, where it burned her touch into his skin. “Do you talk like this to all the girls, or am I just special?”

Clay met her gaze and took a breath. “I’m still trying to figure that one out.”

She blinked. “Well, let me know when you do. ‘Cause I’m just dyin’ to find out.”

She tilted her head for another drink, and Clay watched as the neckline of her dress fell open, revealing the Reaver mark etched into the skin below her collarbone. Unbidden, his fingers drifted to the design: a jagged “R” seared within a circle, smooth against his touch. “Did that hurt?”

He thought he heard her breath catch; he knew he saw her eyes widen as her gaze drifted to his hand.

“Sorry.” Clay yanked his hand away, his cheeks burning against the warm September breeze. “I just…I’ve never seen one this close before.”

“You mean my cattle brand?” She skimmed the mark with her hand. Her forehead creased and her mouth puckered as she stared at the fingers he’d touched her with seconds before. “It’s okay, I guess. It’s just – I’ve never had anyone touch it before. It’s . . . kinda weird.” Her hand brushed against his arm, causing his breath to catch. “But it didn’t hurt. Or, it did for a minute, when I first got the flash.”

“Yeah.” She nodded. “It’s like…a moment, when you know you were chosen. A searing pain, and then you get the mark. It happened when I was thirteen. A full year before any of my other friends were chosen, which really kinda sucked.” A sip from the bottle, washed down with a tuck of her mouth. She smacked her lips together. “But it’s okay. I’ve gotten over it.”

“Yeah. I guess.” Shivering, Julia swigged another long drink. He took the opportunity to caress her hand with his thumb, sliding it beneath his palm.

She shifted until she was sitting, her gaze drifting to his mouth. “I wonder…”

“What do you wonder, Jewels?”

Her eyelids fluttered at the endearment, a spark of surprise sizzling through her gaze. “I – I wonder if …”
Julia’s free hand glided into the air, and she skimmed her fingertips against his lips. “Do you mind?”

Clay swallowed and leaned forward as her touch seared itself into his skin. “D-do I – Oh.” He blinked. “Oh, yeah. Um, okay. Sure.” He slid open his mouth to reveal a pair of gleaming white fangs.

She smoothed her fingers over their tips, wincing as they pricked her skin. “They’re sharp.”

“It’s okay.” Flipping his hand, he captured her fingers between his own. “I don’t bite, and I never hurt.”

He was caught within her stare, pulled within the molten fire flashing through her eyes. His heart dipped as she yanked her hand from his touch, a guarded mask slipping over her features. A second later, and the bottle was at her lips, the rush of liquid flooding her throat. He caught the bottom with his hand, causing her to lower it until it hovered between them both. “Why do you drink so much?”

“Actually,” he lowered his hand and she plunked the bottle onto the deck, “I guess I’m trying to figure out why you pretend so hard like you don’t.”

“Yeah, maybe.” Clay scratched behind Pandora’s ears, making the creature purr. “Or maybe you’re just too scared to try it any other.” Her eyes flashed fire, but he caught her hand before she could flail him with her words, flipping it to run his fingertips along the lines of her palm. “I told you. You don’t have to be afraid of me. I don’t hurt, and I never bite.” 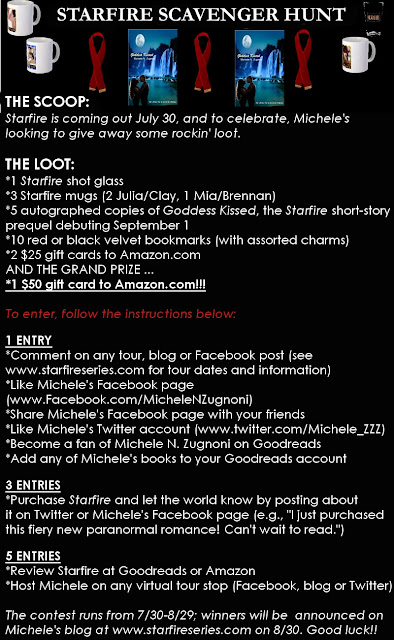