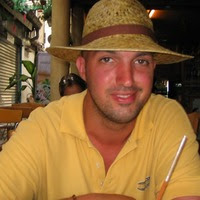 Today, we have author Robert Bevan to talk about life, the universe and his new novel, Critical Failures.

Robert Bevan is an American author and university English teacher living in South Korea. He is a husband and father of two. When he isn't busy writing, teaching, fathering, or husbanding (a small window of time on Friday nights), he still plays third edition Dungeons and Dragons.

I wrote my first full novel a few years ago, and I planned out the whole thing. It was garbage. For "Critical Failures" I just put characters in a situation and let them run wild. A lot of it gets cut in revisions this way, but there's also a lot that I never would have thought of if I hadn't set the characters free.

My characters deserve co-author credits. They write so much of my story.

I'm an American living in South Korea. When I was young and single, I traveled to most of the places I wanted to travel. Now that I'm married with children, my dreams are more focused on moving back to the States and settling down. But I would like to take my kids deep sea fishing off the coast of Thailand when they're old enough. That was a good time.

With Critical Failures, my goal was to take the severely underrepresented sub-genre of Comic Fantasy in a different direction than what is customarily accepted as the norm. I didn't want to rely on witty puns and cute anachronisms for the humor. I was going for something a little more rough and crude, like you might find in a Judd Apatow movie. The premise isn't exactly an original one. A group of friends gets transported into the world of their fantasy roleplaying game. If you remember that far back, that was pretty much the premise of the Dungeons and Dragons cartoon. And it's been done since then. But I think you'll find it hasn't been done quite like this.

I've learned the importance of having a good beta reader who really understands your vision. I think you're better off going it alone than with a beta reader who doesn't get what you're trying to do.

Years of playing RPG's and questioning the logic behind some of their rules and conventions. Love of the written word.

Keep at it. As with any craft, you're going to suck at it when you begin. The more you write, the sooner you excrete all of the horrible crap that you're going to write and begin to write things that people will want to read. Also, grow a thick skin and accept criticism.

I'm going to go with Douglas Adams, and The Hitchhiker's Guide to the Galaxy.

One minute, they're drinking away the dreariness of their lives, escaping into a fantasy game and laughing their asses off. The next minute, they're in a horse-drawn cart surrounded by soldiers pointing crossbows at them.

Tim now has the voice and physique of a prepubescent girl. Dave finds that while he lost a foot or two in height, he somehow acquired a suit of armor and a badass beard. Julian's ears have grown ridiculously long and pointy. And Cooper... well Cooper has gotten himself a set of tusks, a pair of clawed hands, and a bad case of the shits. He also finds that he's carrying a bag with a human head in it - a head that he had chopped off when they were still just playing a game.

Shit just got real, and if they want to survive, these four friends are going to have to tap into some baser instincts they didn't even know existed in their fast-food and pizza delivery world.

It's fight, flight, or try to convince the people who are trying to kill them that they don't really exist.

Meanwhile, a sadistic game master sits back in the real world eating their fried chicken.

Cave of the Kobolds is a short story I wrote as a promotional supplement to Critical Failures. It features a couple of the same characters, though the plot is tangential to the plot of the novel series. It's free. Check it out.

Thank you, Robert and good luck with your books :)