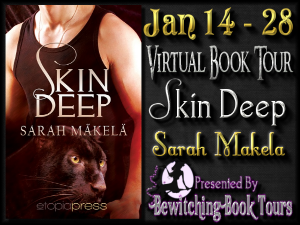 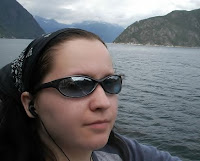 Sarah Mäkelä lives in North Carolina with her husband and cats. In her spare time, she enjoys reading, computer and console games, and traveling all over the world. She is a member of Romance Writers of America, as well as the Heart of Carolina Romance Writers and the Fantasy, Futuristic, and Paranormal chapters. Find her online at www.sarahmakela.com.

A: I generally plan out the overall story, but there tends to be things that I haven’t figured out. In those cases, I let the story flow.

A: Sometimes they do. When that happens, I look at what will be better for the story. Is the direction the characters are taking it for the best or is it a rambling tangent?

A: One of my favorite foods is Chicken Florentine.

A: I’d love to travel by train through Europe. Europe is so full of history, and I love learning about history.

A: Yes, they do. My Amazon Chronicles books are set in the Amazon Rainforest. Her Christmas Elf takes place in Finland. Captivated was set in medieval England.

A: Yes, I do. I love music. Sometimes I listen to it to help me get into a certain mood for a scene, and other times, I use it to focus and block out noise, which probably sounds weird but it somehow works for me.

A: Skin Deep is about, Angelique, a woman gifted with a magical black panther tattoo that feels like she needs to keep the love of her life at a safe distance. The tattoo is her dark secret, and she knows there are people out there who would do anything to take the power for themselves. Except Connor isn’t sure why she left, and he’s determined to win her back. He’s a werewolf, and his alpha will force him to mate with a female he can’t stand unless he can claim Angelique as his mate, but they might not have a chance if their enemies destroy them first.

A: I’ve learned a lot about writing and publishing since I first started. I’ve learned that it’s important to keep writing even if you’re in love with a certain book. The more you write, the more you hone your craft, and the better chance you’ll have of getting published.

A: Yes, I would’ve focused a little more on building an audience on my journey to getting published.

A: I count Laurell K. Hamilton as one of my main influences.

A: Write a lot! As I mentioned above, the more you do it, the better you’ll get at writing. It’s like a muscle that needs to be exercised. Most importantly, don’t give up!

A: Hmm… it’s hard for me to choose a favorite book since I really like several. One of my favorites is Curse the Dawn by Karen Chance. My favorite writers are Karen Chance, Ilona Andrews, and Laurell K. Hamilton.

A: Blurb for Skin Deep: Angelique had no idea her black panther tattoo would force her to abandon the love of her life—Connor O’Reilly—but she’s determined to keep him safe no matter how much it hurts. Her tattoo doubles as her feline familiar: loving, protective, dangerous, and with a life of its own. It’s also her deepest secret and draws enemies who desire its power for themselves.

Connor has no idea why Angelique left him, but he’s determined to win her back. As a werewolf, he has secrets of his own. Now his alpha is ready to force him to pair with an ex-girlfriend he can’t stand unless he can find Angelique and claim her as his mate. But even as their secrets threaten to keep them apart, hidden enemies seek to destroy their chance at love forever.