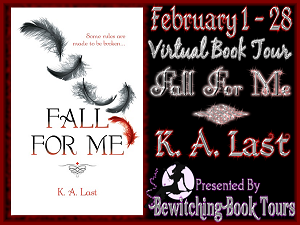 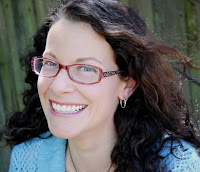 K. A. Last was born in Subiaco, Western Australia, and moved to Sydney with her parents and older brother when she was eight. Artistic and creative by nature, she studied Graphic Design and graduated with an Advanced Diploma. After marrying her high school sweetheart, she concentrated on her career before settling into family life. Blessed with a vivid imagination, she began writing to let off creative steam, and fell in love with it. She now resides in a peaceful leafy suburb north of Sydney with her husband, their two children, and a rabbit named Twitch.

Hi Annette, and thanks for having me at your blog today and taking part in the Fall For Me book tour.

I usually just let the story flow. I always have an idea in my head of how I want things to work out, but I don’t plan in detail, I find it too restricting. I quite often just write snippets of conversations or scenes down as they come to me, or think them over for a while first, then fit them in where I need to.

Yes, absolutely! Sometimes I look at them and think; you didn’t just do that. I’ve been known to talk to my characters as if they were real people.

I love cheesecake and tea (if tea can be classified as a food). I wonder if you can get tea flavoured cheesecake.

I am definitely a night owl. I hate getting up early, which is rather unfortunate as I have two young kids that are up around 6am every morning.

One day I would love to go to Paris. For as long as I can remember it’s been the one city I want to visit before I die. I’d really like to visit the Louvre as I love anything to do with art. The English country side is also high on the list.

I guess that depends on where you’re from. I live in Australia, so the setting for Fall For Me (even though it’s fictional, it’s loosely based on the NSW country side) is not so distant for me, but anyone overseas would probably think Australia is pretty far away.

Yes, sometimes. I like to have background noise. I usually write at night in the comfort of my rocker-recliner, so the TV is on. If I do get the chance to write during the day my iPod is pumping out some tunes. I can also write when it’s silent, and sometimes it’s better if I’m really trying to think.

Fall For Me is my first novel. It’s also the first in what I plan to be a three part paranormal romance series called The Tate Chronicles. It’s set in the fictional country town of Hopetown Valley where a Protection Angel, Grace, and her Vampire Hunter brother, Archer, have been assigned. Things get complicated when a not so normal vampire turns their world on its head. To make it worse, Grace also falls in love with a human. In one sentence, it’s basically about a girl who fights for what she believes in. Romance isn’t the only part of it though, there’s a lot of action and betrayal as well.

I have learned that writing is actually the easy part. All the other stuff is where the hard work lies.

This is a hard question. I think the answer would be no, as everything I’ve done so far has taught me something, and every step has been necessary to get to where I am and where I want to be. No regrets.

I would be lying if I said I wasn’t influenced by the big name authors that are currently on the market. Of course they have influenced me. It would be wonderful to become as successful as the likes of Lauren Kate and Becca Fitzpatrick—two authors I admire immensely. At first, becoming successful was pretty much all it was about for me. But now my perception of successful has changed dramatically. For me, having money is not what will gauge my success (although it would help). I love my story, I’ve put my heart and soul into it, and I’d be happy if there was only one other person out there who loved it, too.

Write, and write often. There will be times when you’ll want to give up, but don’t let rejection stop you from writing, and never stop following your dreams. Write for yourself first and foremost, and remember it is impossible to please everyone. Don’t waste time hating the haters. As hard as it is, ignore them and move on.

Passionate, imaginative and a little crazy.

Oh, that’s a hard one. There are lots of books I love. The Book Thief by Markus Zusak is at the top of the list, along with Between by Jessica Warman. I also love a good series, like The Hunger Games and the Fallen books. An Indie series I absolutely love is The Spellbound Trilogy by Nikki Jefford, and I’m eagerly awaiting the release of Enchantment. As for my favourite writer, that would have to be Stephen King. He has written so many great books. The Dark Tower series is fantastic, as is The Stand. I could go on forever! 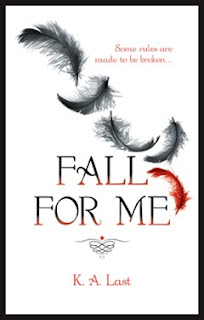 “Angels aren’t supposed to fall in love, especially with each other. But for the record, you were worth it.”

Grace Tate is a Protection Angel and Vampire Hunter, and she has always followed the rules. But some rules are made to be broken…

Until now the fight against evil has been simple, and falling in love was never part of the plan. So what happens when it’s beyond Grace’s control, and when she least expects it she falls for the wrong person?

All hell breaks loose, that’s what.

At Hopetown Valley High, not everything is as it seems, and the one person Grace thought was her enemy becomes her most important ally.

Blood will be shed, lives will be lost and friendships will be tested. It all comes down to one decision, and when Grace tries to save all those dear to her, she realises not everyone can be—or wants to be—saved.