Virginia Gamsky Hust is a full time student and wife, living in the sunny state of Florida. Her work is an eclectic mix of her favorite genres. She works implicitly with Sarah Maddox her best friend and editor. Virginia is a dog lover and shares her life with not only her husband but also a miniature poodle named Apollo.


A little of both I guess. I plan the basic storyline, I know what I want to happen to get me to the ending I’ve envisioned. The characters interaction, the dialog, just flows. I feel like knowing what I want them to say to one another stunts the writing, makes it feel bogged down.

Yes, often. My editor is forever bemoaning my tendency to go off on a random tangent. Sometimes the characters have a side story to tell that I wasn’t aware of. If it fits with the story, it stays, if not it is dumped into the “side story” folder on my computer.

Sushi! I absolutely love every kind of sushi (other than urchin).

Defiantly a night owl, I find it hard to write when my husband is awake. He is constantly asking me what’s happening next in my writing.

I’ve already been all over the world, I would love to go to India, or back to Ireland. I enjoy other cultures, my original intention was to be an Anthropologist, but writing kind of took over.

Yes, quite often. I try not to write about places I haven’t personally been, but sometimes it can’t be helped. In Eternal the base of the Fallen Angel’s operations is in East Russia, I had to pick somewhere remote, so although I’d never been there I took on some research and placed it.

Eternal is the first book in a trilogy. The main characters Maura and Gabriel couldn’t be more different. Maura is feisty, sociable and a vampire working with fallen angels. Gabriel is laid back, reclusive and a rather normal private detective.

The book is written from both of their points of view. Maura has been captured by a radical group of fallen angels bent on destroying the earth. Eternal follows her fight to survive.

Gabriel is brought into the world of fallen angels and vampires after one very strange meeting. Throughout the book he finds his strength as well as destiny.

I started writing poetry and publishing in small publications. As I worked on novels I learned if you can write well you don’t need a big publishing house. I know that if Eternal reaches the right people it will be successful. I don’t need someone else to validate my work.

I’ve also learned editors are necessary, cover artists are life savers and pre-readers are amazing. Writing a book starts with an idea and an author but to make a novel you have to have a team.

No, I have the best team a girl could ask for. I love my characters; I have the freedom to write when I want to and what I want to.

Anne Rice is the reason I love vampires, so I would say her work influenced me. My Grandmother was also a driving force behind Eternal. She has always believed in me.

Haha I’m pretty new to it myself. But I do want to stress that no matter how good you think your story is there are going to be people who don’t like it. That being said make sure they don’t have reason to mock it, editors are important. I cannot stress enough how important they are.

Oh that is a hard one. I love the Harry Potter books, they are a huge part of my childhood. So maybe they would be my favorite books. The author I love the most would have to be Jane Austen. Everything she wrote is gold; I can’t count how many times I’ve read Pride and Prejudice. 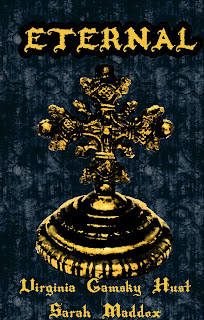 Three hundred years of penance, of suffering through an immortal life has left Maura praying for salvation. She joins a group bent on gaining back their souls by awakening The One and after a rather bleak few years in Cairo she thinks they’ve found him. But after a meeting with her sire goes terribly wrong she is trapped in the enemy camp. How far will she go to survive?

Gabriel is a normal, if rather jaded private detective living in Seattle Washington, until a beautiful woman shows up at his practice, claiming to be a vampire and asking for his help. Suddenly his life is turned on its head as he is introduced to the underground society of Fallen Angels bent on finding their savior.


Any websites/places readers can find you on the web.
I am on twitter! @VirginiaGHust
And I have a website. www.Sonsofheavenseries.webs.com
And of course Amazon http://www.amazon.com/Virginia-Gamsky-Hust/e/B00AY2CX9A/ref=ntt_athr_dp_pel_1

Thank you, Virginia and good luck with your books!