Why Do You Write?

I sat on the floor in the back of a bookstore in old town Pasadena perusing the selections. It was Saturday, late afternoon, another sunny day in L.A. I didn’t notice the store owners hustling everyone out the door and they didn’t see me in the back on the floor. After a while I picked a book I liked, got up and went to pay for it. The store was empty except for an old man sitting at a large desk awkwardly placed in the center of the main aisle. It blocked my way to the checkout so it was impossible to ignore him.

I greeted him with a quick ‘Hi,’ and smiled as I wriggled around the desk. He smiled back and asked me if I could get him a glass of water before the signing. I told him I didn’t work at the store. Then he asked me what I was still doing there. Buying a book, I told him. He took the book out of my hand and read the title, looked at me and smiled. This is good, he assured me, and handed the book back but kept staring at me with this funny grin on his face, like he had a secret.

He looked familiar but I couldn’t place him. There was a tall stack of books on the desk next to him. The Martian Chronicles, one of my all time favorites. Then I noticed the sign on the easel in front of the desk. Ray Bradbury Live! Today at 5:00.

I blushed. He smiled with my acknowledgment. Ray Bradbury was one of my few idols, and he was sitting in front of me. I was speechless at first, which is rare for me. The man was what I aspired to be, a great writer. I picked up one of the ‘special addition’ hard cover books on the desk and held it up. This is really good, too, I assured him. He laughed. In the five years I’d been seriously writing I knew nothing I’d written touched his talent. And then I got sad.

I felt the tears come. I couldn’t stop them. I smiled at him, put his book back in the stack and turned away, started to walk to the checkout but he stopped me. He asked me what was up, but I told him he couldn’t possibly understand, knowing who he was, what he was, and what I was not. Try me, he insisted.

So I did. I explained that I wrote too, but didn’t label myself a writer. Though it was easy for me to recognize talent when I read it, it was impossible for me to see it in my own work. Every time I put word to paper I questioned if it was any good.

Surprisingly, he laughed. Then he told me that he too had the same question running through his head with everything he wrote. More often than not when he read his own work he thought it was crap.

I was astonished. The man was a renowned novelist. How could he still question if he was any good? I had assumed once my work was widely read the uncertainty would never plague me again. The idea that I would have to battle my self-effacing ego the rest of my life, bestseller or not was appalling, and I told him so.

His expression softened and he shook his head. Then he asked me why I write.

I’d never really considered the question before. I’d been writing for as long as I could remember, diaries and journals when I was younger, then stories, movies, and eventually novels. I assumed that once I got good enough, my writing would be actively sought, and bought, and I could quit my day job and write full time. But that hadn’t happened yet. Clearly I wasn’t good enough. Perhaps I never would be. I knew I should just grow up, give it up, invest my energy into my 'real' [paying] job, though the thought of not writing anymore was on par with going blind.

I write because I love to, I told him.

He smiled. Good answer, he said. The question is not if you’re any good, but if you love the process of writing. Famous or not, keep writing as long as you love doing it.

And so I have. I still get disheartened, every other day it seems I’m back to black, trying to talk myself into making my day job my career. Even though I’m publishing now there isn’t any money in it. Yet. Hope springs eternal. Good or not, known or not, I keep writing though, because I love to write. 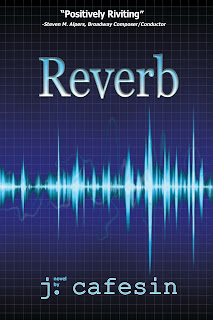 James Micheal Whren is brilliant, beautiful, rich, and taken—with his genius for creating music. He's desired by many, yet commits to no one but his muse. Just twenty-eight, and at the pinnacle of his career, on the eve of his brother's funeral his father shatters his life, and James is left abandoned in hell with no one real to save him. His odyssey to freedom takes him beyond the looking glass, to the reflection of friends and lovers. Humbled and alone, James escapes to the Greek island of Corfu. But instead of finding solace there, loneliness almost consumes him. Until Elisabeth, and her son, Cameron.

Reverb is a love story, a psychological thriller paced with romantic suspense. In the spirit of The Magus (John Fowles, 1966), and way beyond Fifty Shades of Gray (E.L. James, 2011), the story chronicles intricately woven characters fraught with frailties that possess us all, and that linger long after the read. It is a tale of redemption—the evolution of a modern man from solipsist to integrated awareness, and the journey that inadvertently awakens his capacity to love. Reverb satisfies one of women's deepest desires—for men to be more emotionally available, and more connected outside of themselves. Read 1st 3 Chpts: http://www.reverbnovel.com/index.php?page=read