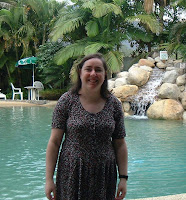 Annette Gisby grew up in a small town in Northern Ireland, moving to London when she was seventeen. She writes in multiple genres and styles, anything from romance to thriller or erotica to horror, even both at the same time. When not writing, she enjoys reading, cinema, theatre and travelling the world despite getting travel sick on most forms of transport, even a bicycle. Sometimes you might find her playing Dragon Quest or The Sims computer games or watching Japanese Anime. She lives in Hampshire with her husband, a collection of porcelain dolls, cuddly toys and enough books to fill a library. It's diminishing gradually since the advent of ebooks, but still has a long way to go.

Most of the time I just let the story flow. Sometimes I’ve had a plan, but then things veer off from it very quickly. I’ve learnt to let it do that. I had a plan for Drowning Rapunzel, including who the ‘baddie’ was, but at the vital scene, it turned out to be someone else all along.

All of the time, I’m inclined to let them. It’s their story after all. Sometimes I feel like I’m just a conduit and it’s really the characters who are writing the story, not me.

More of an afternoon owl really. I get tired very easily and when I’m tired, that can bring on a vertigo attack so I try and get as much sleep as I can. It’s difficult to get to sleep though when you’re dizzy every time you like down.

I’d love to go to Japan, see the temples and castles and immerse myself in a culture that is so different from mine. It seems fascinating. I’d also love to get back to New Zealand one day; it’s our favourite place. The people are so friendly and the scenery is just breathtaking.

Yes, depending on the book and I suppose depending on where you’re based. New Zealand with a Hobbit Botherer speaks for itself, LOL! Some are set in fantasy lands or on different planets in the future, it all depends on the story. Drowning Rapunzel is set in England, which isn’t far from me, but would be for people from the US or Australia.

No, I couldn’t concentrate if music was playing in the background. I need complete silence when I’m writing, but I enjoy listening to music when I’m at the thinking or brain-storming phase, it helps a lot with inspiration.

Drowning Rapunzel is a romantic suspense novel with a little bit of the paranormal. Beth Gregory has always seen visions, but her brother Andrew, a doctor is convinced she’s having hallucinations due to the stress of witnessing their parents’ deaths in a car accident when she was seventeen. Beth has always been a bit under her brother’s thumb and when the chance comes to leave her aunt’s home and become a live-in secretary to reclusive painter Josh Warrington, Beth jumps at it. She’s not so sure she’s done the right thing when her visions start coming back.

That once you’ve finished the book or story, it doesn’t end there. You’ll go through rounds of edits until you go cross-eyed searching for elusive typos and you’ll never want to read it again. Then comes the promotion and marketing, trying to get your name and those of your books out there in competition with a million others. It’s hard work.

Researched book titles more! There are lots of books called Silent Screams and lots of fantasy books called The Chosen :) I try and research the names a bit more now, but even the other day there were a few new books out called The Witch Hunter.

That would have to be my husband, John. I am a bit of procrastinator and start lots of projects without finishing the previous ones. John used to read my sample chapters but one day he said he wasn’t going to read any more until he could read a complete book so that spurred me on to get my first novel finished.

Read, read, read then read some more. To love writing, you have to love reading, at least for fiction. If you don’t have that passion for a good story it will be difficult to get it down on the page. After the reading comes the writing. There are no shortcuts. You need to just sit down at the computer or with pen and paper and write. The more you write the easier it will become.

My favourite series of books at the moment is the Harry Potter series by JK Rowling. I have a few writers where I will read all of their books. For historical romance, Elizabeth Chadwick and Phillipa Gregory, for psychological thrillers S J Bolton and Sarah Rayne. For horror you can’t really beat Stephen King, but I also like Shaun Hutson. My all time favourite book is Beauty by Sheri S. Tepper.

Recently released from a mental institution, Beth Gregory accepts a job as a live-in secretary/PA to the reclusive painter Josh Warrington. Beth's long red hair fascinates him from the first moment he sees her and Josh wants her to be his Rapunzel for a series of fairy tale paintings he's working on.


Beth has two major fears: that she will be sent back to the mental hospital and the visions which landed her there in the first place will return. They do; this time giving her glimpses of murders before they happen. Beth becomes the main suspect in the murder investigation and then she has the most disturbing vision of all: she will become the next victim...

New Zealand with a Hobbit Botherer – co-written with my husband, John, travel and humour.

The Chosen – M/M Fantasy romance, out of e-print and looking for a new home at the moment.

The following short stories appear in Shadows of the Rose and also as stand-alone ebooks: