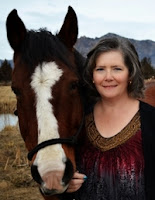 Wife, mother, grandmother, and the one who cleans pens and delivers the hay; award winning author Paty Jager and her husband currently ranch 350 acres when not dashing around visiting their children and grandchildren. She not only writes the western lifestyle, she lives it.


I don’t plan everything, but I do know the beginning, a couple turning points, and the end before I start writing the book. I do what I call my “stew and brew” on every book. It’s the months leading up to when I actually sit down and write. During this time I get to know my hero and heroine. I learn about their professions and have scenes play out in my head that usually never make it into the book but help me to get to know the characters better before I start writing. Some of these scenes will be backstory. And this is “stew and brew” time is when I do the research for a book. If it’s an area I don’t know, a culture I don’t know, or a time, I do the research and it also helps me to work out the premise or plot for the story beyond the romance.

There have been a few times when I’ll write a scene and wonder where that came from but farther along it plays right into another scene. When that happens, I get excited. It’s amazing how much of writing, at least for me, is subconscious. There have been a couple secondary characters that I’ve had to tone down knowing they won’t be in another book.

Chocolate! Is that a food or just a tasty morsel?? I have to have a cup of hot chocolate every morning like most people have coffee. I always have either Dove chocolates of mint M&Ms to nibble on throughout the day.

I’m more a morning person than a night owl but I like the sun to be up when I get out of bed. ;) Having cattle and acreage we tend to be early risers to get the chores done and have time for other things during the day.

Well, I recently wanted to go to Guatemala and Mexico City but my husband said it was too dangerous. The reason I wanted to go there was to research for my Isabella Mumphrey action adventure series. The first book Secrets of a Mayan Moon is set in the Guatemalan jungle and the second book, Secrets of an Aztec Temple is set in Mexico City. I would like to keep this series going so a trip to Central or South American would be next on my wish list.

Yes, I do. Especially on the first draft. For my Spirit trilogy about Nez Perce Indian spirits, I listened to Native American music. The beating of the drums and the singing were instrumental in helping me give a cadence to the writing. For the two action adventure books, I listened to Mayan, Aztec, and Mexican music. For the westerns if they are historical I listen to bluegrass music. Contemporary westerns I find a singer that exemplifies the theme or feel of the book and listen to them.

My latest release is Secrets of an Aztec Temple. This is the second book in an action adventure romance series. Isabella Mumphrey has a genius IQ having received her doctorate in Anthropology at the young age of twenty two. She has a “survival” vest she wears while on site working. It has everything she needs to get out of tight situations. And with her curiosity, need for justice, and unerring habit of getting into messes, she uses it a lot. Tino Constantine is a DEA agent out for revenge. He’s fallen for the spindly, bookworm anthropologist but he can’t promise her more than a steamy meeting now and then until he takes down the drug lord who killed his family.

So much! Learn the craft of writing don’t rely on storytelling. You have to surround yourself with people who believe in your writing but who don’t say everything you write is wonderful. Other writers you trust and admire their work are the best people to help polish your work for publication. You don’t have to go the traditional route to find readers and make a living.

Not really. I started with a small POD and ebook publisher which helped me to learn all the ins and outs of getting a book ready to publish. Their hands-on method helped me learn more than I would have with a larger publisher. The knowledge I picked up there has helped me become an Indie author. And I just recently joined an Indie Author Co-op. Windtreepress.com You can find all my books for sale there as well as on most ebook venues. But at Windtreepress you can also purchase an ebook box set of my historical western series for a discounted price. I’m excited to see how being part of an author co-op will help me with marketing and promotion.

The first person who saw I had potential and took the time to help me understand craft was author Nicole McCaffrey. We became critique partners and with her tutelage I perfected my craft and received a contract. Along the way, I believe it has been my connections with other writers either as critique partners or through workshops and conferences I’ve attended that have helped hone my craft and taught me promotion. But I think the biggest thing to influence my writing is my desire to learn. I love doing the research for each book. Whether I’m skulking around in historical museums, talking with librarians, or meeting people online from other countries to make sure I’m giving the correct flavor to a story, I enjoy the learning and then entertaining the reader as I teach them something about history, an area, or a profession.

Learn the craft of writing. Take workshops and classes to learn Goal, Motivation, and Conflict, how to set up beginning, middle, and end, and learn to show not tell. Bring your characters to life and surround yourself with positive people.

I have a couple shelves of favorite books by different favorite authors. Agatha Christie, Nora Roberts, LaVyrle Spencer, Suzanne Enoch, Lauri Robinson, Nicole McCaffrey, I could keep on going. I have many favorites!

Secrets of an Aztec Temple

Revenge is not always sweet…

Isabella Mumphrey can’t leave a puzzle alone. This time she attempts to use her anthropology knowledge to uncover who is stealing priceless artifacts from an Aztec Temple in Mexico City. She believes the discovery will prove her worth to the World Intelligence Agency.

Tino Constantine is also in Mexico City. He has infiltrated a drug lord’s organization to find enough evidence to not only prove the man’s illegal activities, but to bring him down for numerous deaths. Namely those of Tino’s family.

But when the love of his life, Isabella, strolls into his enemy’s home, Tino is challenged with the choice of saving her or fulfilling his revenge.

Gambling on an Angel

For a Sister’s Love

Spirit of the Mountain

Spirit of the Lake

Spirit of the Sky

Secrets of a Mayan Moon

Secrets of an Aztec Temple

Every time the blog reaches 20 comments, Paty will be giving away a $5 e-certificate from amazon to one lucky winner :)