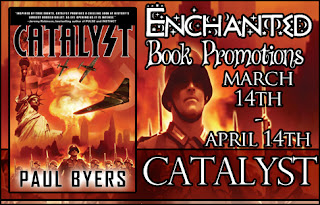 Paul grew up in Oregon on the shores of the mighty and mysterious Columbia River, and spent endless hours daydreaming on the beach in front of his house, making up stories about the ships from exotic ports all over the world that steamed up the river - what secret cargo might they be carrying; did they harbor spies who were on dark and exciting missions?


Later in adult life, he moved to another mysterious and provocative city - Las Vegas, just outside the famous Nellis Air Force base. After work he would sit on his porch and watch the fighters take off and land, igniting his imagination with visions of secret missions and rich speculation about what could possibly be hidden at Area 51.

After moving back to his native Pacific Northwest, Paul worked for the Navy and took every opportunity he could to speak with veterans from WWII to the Gulf War, listening to them swap stories and relate the experiences of a lifetime.

So it is this combination of a passionate love of history, a vivid "what if" imagination, and a philosophy of life that boils down to the belief that - there are few things in life that a bigger hammer won't fix - that led Paul to become a writer of exciting, fact-based action-thrillers. His greatest joy is leaving his readers wondering where the facts end and the fiction begins.

I’m not that disciplined as a writer like some who have each chapter outlined and plotted. I have a beginning and a general ending in mind but the story usually writes itself. For me, it’s a more creative process, allowing me the chance to take a left hand turn in the story if needed as opposed to having to stay in the right hand lane all the time.

Not usually. While I have strong characters, they general know what to do and where to do it. However, they do take on their own personalities, some for the betterand some for the worse. Like with most characters in any story, some I really like and grow on me while others are just there to serve their purpose in the story.

Tough choice, tacos, pizza and just about any seafood. (no oysters though!)

I’m a morning person by nature but I generally do most of my write at night after I get home from work. In the mornings I usually try to do marketing, check emails, Facebook, things like that.

I would like to travel to England and Europe just to take in all the history. Then, I would like to go to Australia for the adventure. However, I just got back from my first cruise for our 25th anniversary and it is definitely something I could get used to!

Yes and no. While some of the backdrops do take place in exotic and faraway places, they don’t take center stage in the story.

No. I’ve tried to listen to inspirational music for certain scenes I’m writing but I generally prefer the quiet.

Catalyst is an exciting WWII spy thriller inspired by true events. Captain Griff Avery of the OSS discovers a spy among his ranks and all the evidence is pointing to the woman he loves as that spy. While trying to ferret out the traitor, he uncovers a plot by a rogue Nazi General to bomb New York. Under suspicion himself, with the help of a B-17 crew and a group of reckless fighter pilots, Avery wages his own war in a race against time to stop the German Juggernaut.

I’ve learned so much than we don’t have time to go into everything, but here are a few quick tips. Be patient, things will always take longer than you think. Don’t rush things and take your time. Be persistent, whether going through a publisher or doing it yourself. Get professionals to help you.

Do your homework! I’m not talking about research (you should be doing that anyway) I’m talking about the writing process itself. From editing to the cover art to what’s expected from publishers to what it takes to self-publish. Get as much information as you can, it will not only save you time and money, it will save you a great deal of frustration further down the road.

I would not rush things along as much as I have in the past. There is so much more to the entire process that I know now that I didn’t know then. Patience is a virtue, they say and something you will need in your writing career.

There were no big “Ah ha” moments as I just picked things up here and there along the way. I’ve learned that words are precious, less is more and show your reader what is going on, don’t just tell them. I’ve also learned as the great Alfred Hitchcock once said, it is not the explosion, but the fear and anticipation of the explosion that is what reaches the audience.

Be patient and be persistent. It will take a lot of effort and time to write and finish you work, so stick with it. Also take the time to make sure it is your best work and that you are not just rushing to get it done. If you want to put out a professional product, then get professional people to help you with it. Editors, formatters, artists for the cover, they are all there to help. It may take a little more time and be more expensive but in the long run it will be worth it.

This is as tough a question as asking me what’s my favorite food. One of favorite books has to be the first Odd Thomas, book by Dean Koontz. While Koontz is a wonderful writer and I enjoy his work, I would have to lean more towards Michael Crichton as one of my favorite writers.

In the waning months of World War II, the allied armies advance upon the crumbling German war machine like a juggernaut. In a final desperate bid to save the Fatherland, a plan is conceived that could turn the tide of the war-the completion of an advanced jet-propelled bomber capable of delivering a deadly payload to the shores of America.

Captain Griff Avery of the OSS has just botched the defection of a prominent German physicist, a man crucial to the Nazi end game, letting him fall into the hands of the rogue SS General masterminding the plot. But Avery's troubles have only just begun: overwhelming evidence points to the woman he loves as the German spy who foiled the defection.

Now under suspicion himself, Avery sifts through the lies and deceit, uncovering the treacherous German operation. Against orders and on the run, Avery is forced to wage a secret war of his own, recruiting the crew of a B-17 Flying Fortress and a reckless group of flyboys and their P-51 Mustangs to help him hunt down the secret SS cell and prevent the slaughter-no matter what the cost.

I have written a collection of sci-fi shorts titled Act of God and Arctic Fire, which is an action adventure. This summer I’ll have a companion novel to Catalyst coming out, Shattered Sky and another thriller, set in the South Pacific called Greed.