In Devin's day job, he works for a major toy company writing wholesome product descriptions. To get the saccharine taste out of his mouth, his avocation is thinking of ways to annihilate the world (in story form only, of course). He lives in southern Wisconsin with his girlfriend and their three feline kids.

For me, stories seem to accumulate. I’ll think of various scenes, and once they coagulate into something approaching a storyline, I’ll create a basic outline and go from there.

Most of my characters have a hint of me in them, so I guess I don’t ever let them really take over.

Raw cookie dough (I know, I know—salmonella will get me some day)

Neither—the sweet spot of the day for me is mid-morning.

I dream of driving an RV around and seeing a new sunset every evening.

Sometimes—but in order to write what I know, I tend to keep to places I’ve seen or know well.

Only to drown out the noise of others.

THE CONTAMINANTS is told through the eyes of teen friends Jessil and Soraj. The story was inspired by the idea that the world’s militaries have enough nuclear weapons to annihilate the planet several times over. So what if in hopes of maintaining its own dominance, the U.S. government decided to nuke the earth, including its own land? In my story, the government prepares for the bombing by building cruisers filled with “the chosen,” who will orbit earth while robots and other automated processes remediate the planet’s environment until a return is safe for humanity. But things don’t go as planned…

It’s equal parts draining and rewarding. To write well takes a lot of effort, but when you achieve what you want, it’s very satisfying. Same with publishing—more to the pointing, book promotion. Getting your story noticed is difficult as well. Yet when someone gives you a good review, there’s no better feeling.

I would have started self-publishing sooner. Trying to find an agent who will even look at your work is quite a chore.

I had many fine teachers and professors who introduced me to great writers. Once I saw the possibilities of literature and language, I wanted to write.

Write what you would like to read. Writing for yourself is the only way to stick with it.

ANIMAL FARM by George Orwell—not a wasted word, and I love satire.

When America attempts to "purify" earth to maintain its own dominance, it sparks a worldwide nuclear holocaust. Teen friends Jessil and Soraj are among the few survivors. They escaped on a cruiser that now orbits the planet and is designed to help regenerate the earth's ecosystem. Soraj’s father leads the regeneration process and is hopeful that he can salvage a region in North America for the cruiser’s return.

But when Jessil discovers a message indicating her own father may have survived the holocaust back on earth, she’s determined to rescue him immediately with Soraj's aid. Can they succeed even though the planet they return to is very different from the one they left—and that their success could mean failure for the regeneration process? 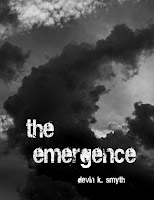 THE EMERGENCE is about an 11-year-old boy who has to deal with a strange fog that eventually overtakes the planet, evaporating all surface water—rivers, lakes, oceans—as it does. The story follows his family’s struggle to survive the catastrophic consequences.