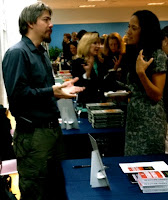 Author Erec Stebbins is a biomedical researcher in New York who writes political and international thrillers, science fiction, narrated storybooks, and more.  Born in the Midwest, with an adolescence in the Deep South and education in the Northeast, he's a research scientist, author, flute maker, and dad.


It depends on the genre and the nature of the story. For my thrillers, the plots are usually multi-threaded and interwoven, so that in order to have the different storylines in sync I need to do outlines and even timelines. For “The Ragnarök Conspiracy”, I posted online my my original hand-drawn timeline for fun back in the Fall:
https://sphotos-b.xx.fbcdn.net/hphotos-prn1/528517_350581111697967_507998821_n.jpg

This also depends a little on the story itself. For my first person narratives, in a sense they DO take over the story by the nature of the perspective. However, my thrillers to date have been in third person, and they are very plot driven, which insulates the novel from that fun character that wants to pull a Tom Riddle.

By necessity, a morning person (children, day job). By nature, a night owl. Hence, all the psychotherapy.

Around the world in a catamaran. I love the idea of taking a boat around the world, being far from land. Cats don’t heel and have great living conditions. But first, I have to get the money to get a Cat. Then, there's that whole "learning to sail" thing.

Yes! In “The Ragnarök Conspiracy”, the action occurs around the world from New York to South America to Europe to the Middle East. In my science fiction novel (currently under construction and due out this summer), the protagonist travels across the galaxy and through time. Now that's long distance!

No, I don’t multitask well at all, and I don’t think that I could write coherently with music on. I could probably tune out music while writing to some degree, but that wouldn’t be listening while writing!

It’s called “The Ragnarök Conspiracy” and is available from Seventh Street Books. The title comes from the Old Norse word for the end of the world, a kind of Armageddon on steroids, if you will. In this “end times” mythology, there aren’t winners. No Second Coming or virgins in Heaven. For the Northern peoples who lived in a very harsh climate, their end of the world has all the gods and heros (along with the monsters and “evil doers”) annihilated, the cosmos decimated, and Order turned to Chaos. The only reason to fight in the Last Battle, therefore, was for pure idealism that it was the right thing to do. Now, imagine a new terrorist organization that has adopted this mythology as its symbol. World War ensues.

Thriller writer Allan Leverone summarized “The Ragnarök Conspiracy” with the words that it “turns the traditional terrorist thriller on its head”. Chris Brookmyre said it was “Outrageously entertaining: epic, explosive, subversive, engaged and compassionate”. I am fond of these descriptions!

More personally, it was written as my own emotional response to witnessing the attacks of September 11 in New York City.

I’ve learned a lot about writing thrillers. Having published only dry scientific articles for the last 20 years, it took a little reprogramming to get out of an academic style and pace a thriller appropriately. This required several rewrites of “The Ragnarök Conspiracy”. My second thriller (currently making the rounds) was written from the get-go much more intensely paced.

I could have saved some time had I known how to pace the thriller initially, which led a lot of potential agents to reject it. Also, I think I would have not tried so much to fit the narrative into what I thought was expected of the genre and just written more from the gut, producing more a distinctive (and for some off-putting) “single malt” novel as opposed to a more broadly inoffensive, yet less distinctive, whiskey blend.

This also depends on the genre, but I would say that for thrillers my idea of what such a novel should be still is very influenced by my youthful reading of Robert Ludlum and Tom Clancy.

Don’t listen to me! Kidding aside, I would say read up from several different authors who have found success via different paths, who have different approaches, and integrate what they say, keeping an open mind and pursuing multiple options. That and remember that persistence (and a thick skin) is the key to success in most endeavors in life.

I can’t say one book is my favorite as so many are beloved for different reasons. I could combine those questions and say “Star Maker” by Olaf Stapledon, but it would not be fully true. I’d have to say Stapledon-Tolkien-Simmons-Ludlum-Vonnegut-cummings-Herbert-Tagore, or some other Ent-like endless name.

The Ragnarök Conspiracy: A Western terrorist organization targets Muslims around the world, and FBI agent John Savas is drawn into a web of international intrigue. To solve the case, he must put aside the loss of his son and work with a man who symbolizes all he has come to hate. Both are drawn into a race against time to stop the plot of an American bin Laden and prevent a global catastrophe.


The Ragnarök Conspiracy is available from amazon | amazon uk
at May 22, 2013