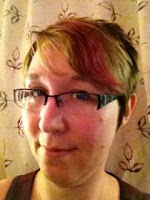 
After her first heartbreak, Tori found solace in two things: reading romance novels and listening to an after-dark radio program called Lovers and Other Strangers. Throughout the summer and fall of 1990, the new kid in town found reading fiction and writing her own short stories gave her a much needed creative outlet. Determined to become a published author, Tori amassed stacks of notebooks and boxes of filed-away stories, most only half-finished before another idea would overtake her and demand to be written down. Then, while on parental leave with her second baby, one story formed and refused to be packed away. Between teaching full-time, parenting, and life in general, it would take almost seven years before the first novel in her first trilogy would be completed. In the process, Tori finally found her stride as a writer.

At present, on her off-time, Tori not only enjoys reading, but also listening to an eclectic mix of music as she walks the family dog (Skittles), attempts to turn her thumb green, or makes needlework gifts for her friends and family members. She loves to travel, collect and make miniature furniture, and a good cup of tea during a thunderstorm or a blizzard. Under it all, she is always intrigued by history, the supernatural, vampire and shapeshifter mythology, romance, and other dangers.

It’s a little bit of both. I start with an outline and a goal to achieve, but then along the way something happens in the plot or in a character’s development that takes me in a new direction. The end of Wind and Shadow did not happen at all the way I’d originally envisioned. I like knowing where I want to go, but I enjoy being surprised, especially if I end up blocked by something that isn’t working. Sometimes a change in my plan happens after a friend has read a draft and suggested that part of it needs improvement. But once I get past whatever is blocking me, the next section often comes quickly on its own.

Oh, absolutely. They surprise me all the time. They’re quite real to me, both friend and foe.

I have a number of favourites, never able to settle on just one. It depends on the mood I’m in, and on the season. Tacos come to mind as being the top of my list -- great in summer and winter -- and Belgian waffles with whipped cream, berries, and syrup. Spaghetti and  meatballs are also up there, along with caesar salad. And of course, just about anything deep fried and covered in chocolate!

I am most definitely a night owl. I love the comfort of the dark, when it’s quiet and there are few distractions, unless they’re sought out. If I’ve had a good sleep, I am capable of being a morning person, but I’d much rather stay in bed than get up with the dawn.

I’ve seen parts of Canada, but never the whole things, so I’d like to visit the provinces I haven’t been to yet: BC, the Prairies, the Territories, and Newfoundland/Labrador. And there are a lot of places in the USA I’d like to go to: San Francisco, Mount St. Helens, New Orleans, and Gettysburg, where I had a brief visit as a teenager on a school trip.

After that, I’d love to travel the world, perhaps as a working vacation, teaching in various countries. I really want to tour the UK, viewing locations with paranormal histories, and see parts of France, Germany, and Portugal. (My family history includes Scottish and Germany ancestry, and my husband’s family can be traced back to Portugese fishermen who settled in Newfoundland.) I’m fascinated by historical and cultural locations, both relatively recent and ancient: catacombs, castles, battlefields, forts, etc.

But most especially, I really want to go to Hawaii with my mother, who went a few times with her own mother while growing up. I think that would be lovely, to develop the trip into a tradition we could continue with my own daughter.

Not really, no. Thus far, I’ve only set my stories in places where I’ve lived or spent some time in visiting. I feel more confident in being able to clearly communicate the settings if I have a more thorough or intimate knowledge of the locations I’m including in the work.

Quite often, I do listen to music and end up developing a playlist of songs that seem to compliment the scenes or characters in focus at the time. But that only works if I’m alone -- I find that if my children are in the room, adding music to the mix creates too much background distraction. I’ve tried headphones, but it’s much easier to wait until the kids are in bed so the flow of song and work gets hit with fewer interruptions.

Wind and Shadow: Book One of the Talbot Trilogy, started as a vague idea in 2005, while I was on parental leave with my second child. I’ve always been a fan of vampire fiction, among others in the paranormal genre, and I also enjoy romance novels. So Wind and Shadow combines the two.

The story begins with a woman named Rayvin Woods returning to her home town after a decade of trying to build a life for herself. She’d been accused of attempted murder when she was just a teenager, and carries the additional burden of being able to do magick. Unfortunately, the timing of her arrival couldn’t be worse: Rayvin drives into town just as an imprisoned vampire breaks loose from the abandoned mine in which he’d been confined for the better part of a year. Rayvin quickly figures out what is going on, when animals and people start being attacked, but the only person who can help her is her high school crush, police officer Grant Michaels. And that’s only if she can get him to trust her, and believe her, in spite of her past.

The trilogy is almost complete, with the second book, Blood and Fire, due out in approximately six months and the third book in progress, although I’m not sure yet how it will end.

I honestly didn’t expect the editing process to be so rigorous, or how difficult it can be at times to complete an entire book. I have a whole new respect for my favourite authors and the process of taking an idea through to the final product. While I still find that I feel better writing a book chronologically, I’m finding that writing scenes as they come also works.

Promotion is also much more time-consuming and challenging than I would have thought a few years ago, as is trying to balance writing with having a full-time day job and two children to raise, plus a relationship to keep strong.

But I’ve also discovered that there is a fabulous network of peers out there, offering support and ideas for just about any situation. I don’t think I would have been able to complete the stories I’ve done without my writer friends, and my supportive publishers.

I would set myself a firm writing schedule and sequester myself in a relatively quiet part of my house. I started participating in National Novel Writing Month in 2011, and that was a terrific experience in daily writing, but I burned myself out by the end. So I know I can write a novel in a period of one or two months, but the best results happen when I am able to focus on the writing as my main work.

The authors who have influenced my style, structure, and tone, for this particular work, include Anne McKinley, Stephen King, Anne Rice, Stephenie Meyers, and Nora Roberts. I’ve also taken inspiration from various films: “The Lost Boys”, “30 Days of Night”, “John Carpenter’s Vampires”, “Underworld”, and the tv series “Being Human” (BBC version), “Lost Girl”, and “Buffy the Vampire Slayer”. In fact, during the process of writing the first and second books of my trilogy, I rather felt like I was writing an homage to my favourite paranormal and romance fiction.

Don’t give up, and don’t underestimate the power of the short story as a method of honing your skills. Write what your heart wants you to write. Be true to your voice. If you love what you’re writing, chances are that others will, too.

It’s so hard to narrow it down when there are so many...but usually, the book that I think of immediately is Anne of Green Gables by Lucy Maud Montgomery. I love the romance and language used by Montgomery, and I’d love to write a book that might compliment hers in some way.

Wind and Shadow: Book One of the Talbot Trilogy

Rayvin Woods, photographer and natural witch. She just wanted to start her life over again after a series of misadventures. She didn't count on rekindling a lost love when she came home to Talbot...or battling a malevolent vampire and his coven for her life.

Grant Michaels, police officer. He thought Rayvin was a murderer. He will do whatever it takes to protect the community he loves from danger...but will he learn to trust his heart, and the word of a witch, before it's too late?

“A Living Specimen” in Midnight Thirsts II (Melange Books)
“Brain Games” and “Bio-Zombie” in A Quick Bite of Flesh: An Anthology of Zombie Flash Fiction (Hazardous Press)
“Thy Will Be Done” in Dark Eclipse Issue No. 16 (Dark Moon Books) “Tabitha’s Solution” in Having My Baby (Melange Books)
“My dearest Father Christmas” in Dear Santa (May December Publications)

Wind and Shadow: Book One of the Talbot Trilogy (Melange Books)