This entire unpredictable yarn unravels over the course of one strange day in West Texas when Sara, a young rehab inmate, completes her destiny to become the most powerful representative of God’s will on Earth.

However, before anything as grandiose as this divine blessing can take place she must deal with a host of lunatics whose lives are suddenly interwoven with her own. She will encounter a disturbed orderly, a repressed psychiatrist, a crazed janitor who has been struck by lightening, and a psychotic killer bent on spiritual remuneration.

Fortunately, not all the crazy characters she meets on her journey of ascension will be an obstacle. Her fellow inmates will grow into lifelong friends and provide her with their own assortment of hijinks. In addition, she will be graced by a kind grandmother who takes her on a magical yet bizarre ride she will never forget.

In the end, the slates of all these lunatics will be wiped clean for good or ill, and the fate of the world will hang in the balance.

The old man glared at the coyote. He’d never really liked the creature to begin with, but it had recently begun to seriously mess with his mind.

The man stroked his long gray beard and leaned back on the wooden stump upon which he sat. He relaxed against the wall of the cave where he had resided for most of his long life.

Do you know what I’m thinking?

Coyote sat up. She stared back at the man. She had never really liked him all that much either. It had been oceans of time since she had found him wandering lost and confused in the desert. She’d known immediately that he was the next chosen one, albeit by mistake, so she had tried to offer him some companionship to ease the effects of that error. However, had she known he would turn out to be a misogynistic, self hating masturbator content to brood in this cave she would have left him to bake until crispy brown in the brutal desert sun. She marveled at the fact that he would spend a whole day spanking it and the whole night asking his half baked idea of a god for forgiveness. In her opinion he was a sad sack of a man, riddled by guilt from an ideology that forbade him to be human. What a waste of time.

Thankfully, he had recently become suicidal. This pleased Coyote greatly, though she knew his power would have to pass to another when his time finally came.

The man studied her closely. Coyote’s amber eyes peered whimsically into his sallow dark orbs. Lost in her gaze the man’s hand absently drifted from his beard to his crotch, where he cupped his nards in an unconscious act of self preservation. He sat there blankly holding his jewels for some time before he collected another cognitive thought.

It makes no difference either way what you think or what I think. I’m done.

The man rose to his feet. The shadows of the cave’s depths merged into darkness behind him as he strode to the entrance. He looked down from atop his mesa at an endless desert sparsely garnished with cobalt sage. He raised his hands into the air. In the sky above, storm clouds formed into thundery clusters crackling with electricity.

Slowly, the dark clouds grew into a wall many miles long and drifted lazily across the sage prairie.

Sara was a melancholy girl with eyes like moons that peered deeply wherever they shined. Sometimes too deeply.

Those eyes now bore into a large shatter proof window with twitchy intensity. Her hands were clenched in white knuckled fists, and her breath came hard and fast as she repeated her mantra.

“The glass is water and I’m going though it.”

Over and over again she said these words with hushed fervor. Two other inmates, Shay and Kylee, watched her from across the room, quietly hoping Sara would do the impossible. The rest of the rehab inmates took little or no notice. It had been fun at first, but now they knew what to expect.

Sara rose to her feet, and her voice took on a shrill tone as her chanting climaxed.

“The glass is water and I’m going through it!”

She hurled her petite sixteen year old frame at the window. In almost cartoonish fashion she bounced off the Plexiglas and fell to the floor in a failed heap. A thin line of blood trickled from her nose and dripped onto the linoleum of the rec room floor. Sara lay there like a stone and looked longingly at the endless desert outside the window.

Heather, the Senior Counselor, approached her and kindly held out a tissue.

“You need to have another talk with Dr. Krittenbrink.”

Sara sighed and sat up, her curly brown hair a tangle atop her head. She took the tissue, wiped her nose and stared at the blood a moment before getting to her feet. Seeing the Doctor again was the last thing she wanted to do, but she told herself she wouldn’t be in here much longer either way.

The Center for Christ’s Healing Touch was a privately owned and operated rehabilitation clinic for juvenile women. It was inconveniently located between the towns of Odessa and McKinleyville in a scorched West Texas wasteland. Most of the young women it treated were sent there involuntarily by their ultra conservative families. It wasn’t a real rehab as much as it was a tough love home for teens. Some, like Sara, were not even drug addicts. They had been caught participating in the kind of youthful experimentation most of us escape from unscathed, but instead of receiving guidance from their parents they were immediately sent here for reprogramming. It’s just how some rich families handled things. They couldn’t have their daughters tarnishing their reputations or ruining their chances at marrying a Senator. And quite frankly, they were accustomed to throwing money at the private sector to handle much of the dirty work of child rearing anyway.

The Center was discrete and effective despite its pretentious name. Most of the young women never returned or were promoted to asylums where they were unfairly diagnosed with the latest disorder and given a steady supply of legally sanctioned drugs to help them cope with the imposition on their reality.

To Dr. Krittenbrink it was all part of the healing process. As head of staff at the Center he enacted his authority with ample gusto. In his view he was not just a doctor, he was also a guardian angel sent to protect these troubled young minds. He was liked by most of the staff, and the inmates under his care generally spoke well of him. He considered himself to be stern but fair.

Sara despised the scrawny little peckerhead from the moment she first saw him. She hated him from the graying hair at his temples all the way down to his perfectly waxed shoes. She had no real reason for feeling this way about him. Since she’d met him he had been completely professional, more than polite, and had an admittedly affable nature. But underneath that polished exterior she sensed a hypocritical and depraved little Napoleon who would do anything to maintain the power he had over everyone within these walls.

As she now sat opposite him, she prepared herself for his shallow inquiries into her clockworks and imagined slapping the condescending smirk off of his face.

“Sara, you’ve only been here three days. This habit of yours is quickly becoming a problem.”

She looked at him like he was an ingrown toenail. Even his voice made her skin crawl. Dr. Krittenbrink couldn’t help but flinch from the extremity of her sudden awkward stare.

“I’m going to prescribe ten milligrams of Ativan a day to help you stay calm. There’s no need for this kind of anxiety. In time and with the Lord’s help you won’t need them, but for the moment I feel it’s the best measure. You’ll start on them today after breakfast.”

“You’re going to put me on drugs?”

They locked eyes, and she had the urge to grasp his mind. She had done it once before, not to him but to her own mother.

Sara was still frightened by the ability and unsure exactly how to use it.

She looked away, and her mind instead went once more to the Plexiglas window in the rec room. 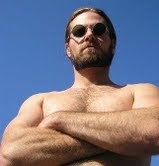 A little of both. I make a detailed outline, but once things start rolling the story takes its own control. A lot lof times things change from the outline, and I don't usually know how it's going to end till I get there.

I've already done a lot of travelling, so I'm kind of a homebody. If I had to choose one place it would probably be the "cradle of life" in Africa.

Only in my head.

It's kind of hard to describe. It is a dark satire/modern fantasy with an ensemble cast, but it is mostly the story of Sara, a teenager who escapes from a Christian rehab clinic. Along the way her story crosses paths with a repressed psychiatrist, a kind but eccentric grandmother, her drunken grandson and his friend, a disturbed orderly, a psychopath, and a talking coyote. Suffiice it to say, it's quirky.

Write from the heart, but use your head.

Tom Robbins and Hunter S. Thompson are my two favs.

In addition to Lunatic Laundry, I've also recently released a novel called Bevel Down: the absurd tragic memoir of an Okie meth head, which is also a work of outrageous fiction.