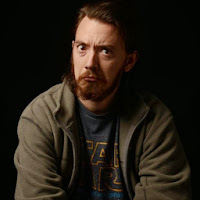 Garrett Robinson was born in Los Angeles, California. Throughout his childhood and into adulthood, he was encouraged to learn by his parents, who not only ensured he had access to thousands of books whenever he wanted, but who traveled with him around the world and helped him do so once he was out in the world on his own. Throughout high school, Garrett excelled in creative writing, churning out millions of words and far surpassing all of his classmates.

After school, Garrett discovered a love of, and has had a budding career in the independent film industry. In today's digital age, however, he has discoverd that new creative models are necessary to succeed. To that end, he has begun turning all of his film ideas into self-published books, in hopes of drumming up support and readership for the stories he has created.

GR: I'm a relentless planner. If I try striking out into the wild blue yonder without a road map, I end up all over the place. Without a careful outline of the entire story, I end up going on tangents and, several thousand words later, I have no idea where I am any more. And not in a good way.

GR: Oh, this happens all the time. Even with careful outlines, my characters and the story itself will take unexpected twists. And if that happens WITH an outline, you can imagine how bad it would be without one!

In particular, my "bad boy" characters are the ones who will unexpectedly come up with some idea I'd never thought of before, that I know they have to do, but that's now a major pain for me, the author, to figure out how to get them out of!

GR: Sushi and steak. In that order, and not together.

GR: This is a poor answer, but I just want to go back to New Zealand. Once I have the money in place, I want to move there to live. I've been twice, and fell absolutely in love with it. My wife, on the other hand, thinks I'm crazy. - We would love to live there too, we've been twice as well :)

GR: Depends on the book. My first three books were all set in Los Angeles, where I'm from. Then my next two were fantasy, and so the worlds were not real. I guess that counts as far away?

GR: I have to listen to Rise Against or I just can't get anything done. I don't know why, but that's just the way it is.

GR: Realm Keepers is a Young Adult fantasy series about six mismatched kids who start traveling to another universe called Midrealm every time they go to sleep. On the other side, they discover they're powerful wizards who are the only things standing in between Earth and destruction by an evil warlord who commands the power of Chaos. The thing is, they're still on Earth every day, too, and time spent here is time away from there. So they have to strike this balance between their normal lives on Earth and their utterly extraordinary lives in Midrealm, where the fate of an entire world is resting on their shoulders.

GR: That I need to spend more time in editing. My first three books were published first drafts—no joke. I've gotten much better now, and I'm more pleased with the published version of Realm Keepers than anything else I've ever done.

GR: I would have started earlier. I've been doing it less than a year, but I've had story material for three. If I'd started three years ago, I can only imagine where I'd be at right now.

GR: Realm Keepers is very strongly inspired by Animorphs, my favorite series as a teenager. Other than that, the sci-fi and fantasy classics of the past are my greatest inspiration. I have a few gripes with most modern science fiction and fantasy, namely that everyone seems to be going too dark for my tastes. It worked for Game of Thrones because that series was the first one to make it popular. Now everyone has to kill off major characters and put other ones through the most grueling scenes of torture, death and dismemberment—blech. Give me a barf bag, please.

GR: 1. Be self aware. If you're not good enough to edit your own book, get a professional. If you can't design a decent cover, get a professional. Know your limits. 2. Build a platform before you publish. If you've already published, you'd better start building that platform right away. 3. Your cover and your blurb sell your book. The content of your book will get it spread by word of mouth. Don't confuse the two—i.e., don't expect an excellently written book to sell itself, and don't expect an excellent cover and blurb to get you referred by word of mouth.

GR: I know this is SO mainstream, but my favorite book of all time is unquestionably Lord of the Rings. There's just never been anything with that amount of depth that I've seen. You can spend your whole life exploring his universe. Nobody else even comes close.

Between Earth and Chaos, Six Children Battle For Our Survival

What if you and your friends went to another world every time you went to sleep?

What if you spent half your life on Earth and the other half fighting to survive against foes too terrible to be real?

And what if you could never tell anyone?

This is reality for the Realm Keepers: six kids from Earth thrust into a terrifying war between Midrealm and Chaos. Plucked from their ordinary lives and given extraordinary powers, they're the only thing standing between us and destruction.

In Episode One, Sarah is living the life every high school student dreams of: she works hard, does well, and has her whole life laid out before her. Until she ends up in detention and mysteriously falls asleep, along with everyone else in the room. Waking up, Sarah finds herself in another world — and another life, one more fantastic and more dangerous than she could ever have imagined.

"An excellent beginning to this fantasy adventure. I look forward to reading more of this series." -Ray Alan Nicholson, Amazon top 1,000 reviewer

Your adventure in Midrealm begins here.

OTHER YA
The Ninjabread Man