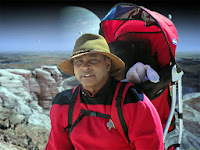 Born and raised in Southern California, J Carrell Jones has worked in the Customer Support field (private and Government) for over 30 years. His current position as a Technical Support Manager for a Digital Telephone Service Provider allows him to feed the family and pay some bills. He is an Army Veteran, where he worked in Computer Operations – last active duty mission served was for Project Restore Hope. Currently, he lives in Inglewood, California with his wife, a beautiful daughter, a female cat named Perilous and a dozen fish.

I don’t let the story completely guide my hand, but I don’t outline every paragraph in every chapter either. I spend days letting ideas flow into me. I’ll daydream scenes and build from there. Once I have an idea on the beginning and end I’ll start writing. I’ll work my way toward the scenes I have in mind and start the process all over again. I view everything with a beginning, middle, and end. More times than many I’ll start with the middle and work until I get to a new beginning, which is usually a chapter.

Often. I learned to discuss the chapter with them. Sometimes a character will want to go places that is totally inappropriate to the story. We sit down, discuss, and decide the best direction to take. Sometimes, not often, I’ll have to slap a character down hard for being totally disruptive. In the last Act, Book Three, of GRID Traveler Trilogy I wanted two characters to engage in sex. Both told me I was crazy and said I was a pervert. I pushed back by setting the scene up but the sex never happened. They took me to a better place and the scene turned out better. In another chapter I wanted two characters to talk. But said no and kissed each other. Well, that tossed my idea out the window.

Both. I can function on four – five hours of sleep per day for weeks at a time. Working two full-time jobs, twice, helped. There was a time I worked 45+ hours and went to school fulltime - for two years! So, there are times I’ll work late and get up early.

Space and the depths of the Oceans. Both are new frontiers and prime for new discoveries. On a terrestrial level, the UK, Australia, New Zealand, Scandinavia. I’ve been to Korea, Germany and France. Japan and Canada would be on my bucket list, too. I just love the British, Irish, Scottish and Australian (all dialects) accents. What American doesn’t? The UK holds wonder and mystery and history, so much history. Australia is the same. Lots of history, struggle, difficulties, yet just as many successes. For New Zealand – LOTR and the Hobbit! I’d like to visit Scandinavia because I have ancestors from there. I know Africa, but up north? Not a clue.

If not in deep space it’ll be far off lands. In my Karen Bechard series we visit the Middle East. In the Blessed Land Series we visit an alternative reality Egypt, with eventually seeing Japan and the New Americas.

99 percent of the time. I like silence, but I also like melodic sounds playing in my head, too. I listen to just about anything and everything. When I started the Interview, “I am the Doctor” was playing. Tracks from Oblivion and Pacific Rim played. Right now, “Your Body,” from Christina Aguilera is playing. I’m about to start “Like a Champion,” from Selena Gomez. Interestingly, “Dance of the Persian Slaves,” from Khovanshchina just started.

Certainly! GRID Traveler Trilogy consists of the first three books in the GRID Traveler series: Distant Reality, Alien Shores, and Lines Crossed. The series is about Sean Blakemore and his path to redemption. It involves ancient alien technology, the concept of old world magick, and what the consequences are when the two combine.

Not really. I’m creating and flushing out a “Becoming a Publisher” book. Of course, it won’t be ready for some time, but when I run across a “should’ve/would’ve/could’ve” I’ll write it down and I’ll get back to you.

Robert A Heinlein and CJ Cherryh, I would say, influenced me the most. Also, E. E. “Doc” Smith and his Triplanetary novel shaped my younger adult mind. My early love of Sci-fi was fueled by marathon showings of the 1930s Flash Gordon and Buck Rogers ever New Year’s eve. Then along came Star Trek and Star Wars. Back in the mid/late-80s I belonged to a STARFLEET International Star Trek club and wrote original character Trek fiction.

You must never stop writing. There’ll be Nay-Sayers whispering in your ear – ignore them. They are idiots and just jealous. This is your passion and your dream, not theirs.

“The Number of the Beast,” by Heinlein. ‘nuff said.

“Long ago we were visited by aliens. They shared knowledge and told us stories of life. They showed us magick and made us believe. Then one day they left. We wondered what happened to them. We searched the skies.

Through the years we performed "magick" hoping they would return. Epochs passed and we went searching for them to discover proof the Elders and Ancient Ones existed.

Toward the end of the last war a hero fell from grace. Our journey begins here . . .

Sean Blakemore, Commander of the GRID Battlecruiser Reginald L Johnson, wallowed in self-loathing. He drank too much, suffered from depression, and swam in self-pity. He figured life could not suck any worse when he received new orders. He had to hand the Johnson over to another commanding officer. God hated him he thought.

Then . . . Dr. Loggar, head scientist in charge of this new mission, drew him into the semi-secret world of The Most High Goddess. She gave him hope.

GRID Traveler Trilogy is a story of Sean’s redemption, from rock bottom to discovering Humankind’s true origins and possibly its inevitable future.”

I belong to the TrekCreative Yahoo Group.

I also sell 3D Content on http://contentparadise.com for Poser.