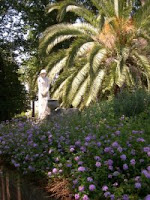 The wife of a reporter and the mother of two wonderful daughters, Pat has lived on three coasts and in the middle of the United States. She's been a book reviewer for too many years to count as well as an English composition instructor and theatrical costumer. She's visited Canada, Europe, Egypt, Nicaragua, and Thailand, and has found that people everywhere are remarkably similar. If she knew you, dear reader, she would like you immensely.

I both plan and flow.  I have to have somewhere that I’m going, but getting there can be as serendipitous as possible.

Take over the story?  Um, not really.  Take over my head, my life, and my thoughts?  Definitely yes.  Arlo Guthrie once said something to the effect that songs swarm in the air around us and all he does is take them from there.  I feel the same way about characters and stories.  They are there for us to take and enjoy.

I grew up in the American Midwest where the food is fairly plain and simple: beef, corn, potatoes, and dessert.  So besides chocolate, which is manna from the gods, any of the Midwestern food groups will suffice.  Not so oddly, after growing up around bloody beefsteak, I write about vampires.  Go figure.

Night.  I could stay up all night and sleep during the day without batting an eye.  Wait!  Isn’t that what vampires do?  No wonder I’m so pale.

I’ve completed most of my bucket list, having gone to Egypt and touched the pyramids before the Egyptian troubles began.  I’ve been to Thailand, Nicaragua, most of Europe, and am returning to England with my younger daughter next year.  She’s a lawyer here in the States and wants to see the House of Parliament, the Old Bailey, and some guys in white wigs.  I say, why not?  I’ve touched Stonehenge, so why not give a guy in a white wig a go?

Oh, yes.  In fact, my vampire travels with her potential boyfriend to the moon to get away from the turmoil on Earth.  She also travels to the Board Room of the Gods, Africa, and Central America.  She gets around, that one.

Sometimes, but not often.  Mostly when the characters are talking in my head there’s not much room for music.

In The Vampire’s Food Chain, Shawn, the vampire who came out of the closet, is propositioned by the gods to become one of them.  But in order to sit around the ethereal god table, she must perform some requests from the Only One.  She does that with the help of her friends—a witch and two vampires—as well as her boyfriends, a warlock and a head vampire.  Ultimately, however, her rise to power depends on her thwarting whoever is trying to kill her.

Wait.  What?  You have all day?  I’ve been a writer and book reviewer since 1970.  I’ve learned a lot, starting with the need to grow tough skin and the ability to take criticism.  And that's only the tip of the iceberg.

Well, maybe a few things.  I would have seen the Rolling Stones in concert no matter what the cost at various times in my life beginning in 1970 when I was in England and they were playing in the same cities I was visiting.  (The Rolling Stones are featured in my book, The Vampire’s Food Chain.)  I would be more self-assertive about my writing—I still balk at selling myself to readers.  Oh, yes, I’d live forever.

I can't remember who said it, but the advice is spot on: There's only one secret to becoming a writer--everyday apply the seat of the pants to the seat of chair and write.  (Also, the hardest advice to take: Don't take criticism personally.  I'm still developing that one.)

You can see my reviewer profile at http://www.likesbooks.com/patprofile.html which will give you some ideas.  I try not to read the genre in which I’m writing so that I don’t inadvertently steal other writers’ ideas.  I want my books to be my own fresh creations, not rehashes of someone else’s brilliance.

Here’s the Query & A I’m sending to review sites:

Q:  If you're a vampire, you're on top of the food chain and live forever, right?

A:  Nope.  You can ultimately cease to exist.  Try again.

A: Do gods eat?  So probably not.  But most will live forever.

Q:  If you're a vampire who wants to walk in daylight, what should you do?

A:  Become a god.  They walk around whenever and wherever they want.  As long as someone believes in them.

Q:  Quit being so insufferable, Patois.  Don't you want people to read about a vampire who tries to become a god?

Q:  The vampire gets help from two hunky love interests--a firefighting warlock with whom she has a symbiotic relationship and the most powerful, ultra-sexy vampire who wants her as his mate.  Now are you interested?

A:  That sounds pretty good.

Q:  How about this?  Her best friend is a Rolling Stones quoting, overprotective witch, who's being courted by an ancient vampire.  How's that for a double whammy?

A:  Are you serious?  Does he try to turn her?  Does she become a vampitch?

Q:  Be serious!  Also the vampire gets to sit at the god table in the sky, surrounded by Jesus, Buddha, Mohammad, the Turtle, Shiva, and a host of others.  So now is she at the top of the food chain?

A:  That sounds like fun.  But I'm guessing the answer is still no.

Q: Well, it's probably more funny than fun.  A meeting is a meeting, after all.  Nobody said being at the top of the food chain would be fun or easy, did they?

Q:  So can a vampire become a god?

A. Find out in The Vampire's Food Chain by Patois.

"I found it to be a funny, insightful and sexy story about gods, vampires, witches and warlocks who confront challenges that, in the end, are quite at the heart of the human experience."  --David S. Shapiro, Amazon critic