Leon "Catwalk" Caliber left his cop job in DC behind, heading to the City of Angels to earn a living off the grid. He took a few odd jobs that called for his particular skill set – extortion, espionage, and the occasional hit – and managed to carve out a niche for himself among the Downtown dwellers.

All the changed when a new breed of MetaHuman cyborg appeared on the streets with explosive violence. Cat’s quiet existence is sent into turmoil when he finds himself right in the crosshairs. He must evade the assassin squads sent by a vengeful pimp, uncover the origin of these mysterious new mechs, and keep the cops off of his tail. Simple enough, except that the cybernetic technology that powers his body threatens to sever his humanity at any moment. Can the killer with a conscience find a cure, solve the case, get the girl, and live to see another day?

Leon “Catwalk” Caliber takes a long drag off of his cigarette. The voice on the vidscreen triggers the same sick taste in his throat as the first time he pressed the play button. The series of events on-screen remains the same: the awkward smile of the girl in the frame, the sweet and self-absorbed tone with which the man just off-camera delivers his dialogue, the slight, excited shaking of the camera as she looks up at him. Once again he asks the young girl which hand holds the coin, even though only his left hand is extended. She’s nervous. Her shoulders are pulled up, and her arms are tight to her body. She shifts to accommodate the tight fit of her school uniform. She blushes, the ghost of Shirley Temple, complete with pigtails and storybook innocence. She giggles and touches the back of the man’s gloved hand with a finger. She’s correct.

It’s the right hand that wields the bone saw.

Catwalk stops the recording. The glass next to him is empty, the bottle of bourbon almost the same. The dull glow of the paused recording is the only light in the loft, save a few blinking sensors from the bay that hosts his motorcycle and gear. He stares mutely at the image on the screen. He already has the rest of it memorized. The girl survives for another two minutes and 17 seconds. She doesn’t suffer long. Thank whatever God she believes in that she doesn’t feel what happens next. This killer doesn’t keep his victims alive along. He saves the mutilation and sex acts until after they’re dead. He doesn’t get off on torture, just the rush of ending a life … even that of an eight-year-old girl.

Cat takes a hold of his whiskey tumbler, mindlessly raising it to his lips. The lack of liquid distracts him from the screen. The video was an unexpected test. Someone hoping to remain anonymous had paid a deposit for his services. The instructions were simple. Watch the video. Find the killer. Get vengeance for the victims. Get proof. Get paid.

His yellow eyes return to the screen. His lips curl into a sneer. After watching the recording once, he was willing to do the job for free. That feeling amplified each time he watched the girl die. Cat chuckles out loud. He’s curious at his reaction. This chit never bothered him before. Why now? Why her?

He stands and walks away from the screen. He needs a break. He stands and stretches. The muscles along his arms and sides are sore. His legs and spine don’t protest. They’re hard-wired into his nervous system. Thanks to modern cybernetic technology, he can leap from the sidewalk to the top of an apartment complex, and outrun most of the commercial vehicles on the market.

The benefits aren’t without a curse. His immune system has never quite solved the riddle of his experimental cybernetics. Treatment is painful and expensive. He could use the money this job would bring in.

Catwalk stands in front of one of the windows, listening to the endless clamor of sirens, screams and gunfire in the distance. He’s chosen a nasty part of Downtown. It’s dangerous, but it’s very private. As a professional hitman, that’s worth the risk.

Running his hands through his jet black hair, he ties it into its customary ponytail. He looks over his shoulder at the custom-crafted, armored helmet resting on the counter. The triangular yellow cat’s eyes stare back at him. Cursing under his breath, Cat walks toward the helmet and the armored motorcycle behind it with cold intent.

There’s work to be done. 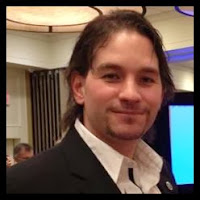 Nick grew up on sci-fi, horror flicks, Dungeons and Dragons, good music, and recycled comic books. He has been published internationally as a comic book author and musician. He’s spent over half his life on stage from New York to Las Vegas. He is outspoken, supportive, and willing to take a good kick to the ribs for the right cause. When not touring the world, Nick lives at home with his blushing bride (and co-author), Dr. Stacia Kelly, their son, and a rotating roster of cats and dogs.

a Rafflecopter giveaway
at September 24, 2013