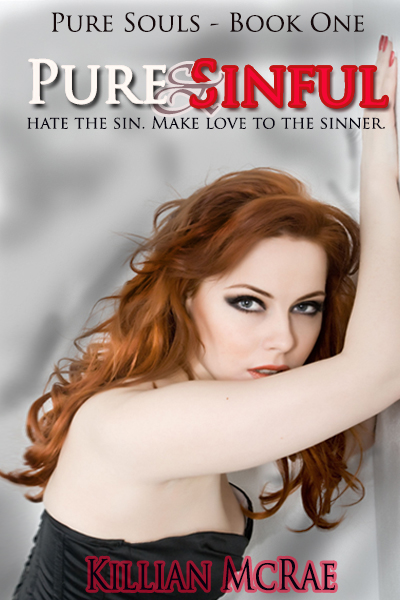 When it turns out your ex was actually a sexy demon sent by the devil to seduce you to evil, you'd think the next guy, no matter what he's like, couldn't be a worse decision. Enter Father Marc Angeletti, a smooth talking piece of forbidden fruit with onyx eyes and a razor wit, and Riona Dade may as well start packing her luggage for damnation now. But come Hell or... well, Hell, Marc, Riona, and demigod Dee Zitka have a mission: serve as a Pure Soul and vanquish Lucifer's minion scum from the face of the Earth to protect humanity from evil.

Oh, and don't get seduced into sin yourself, because a fallen Pure Soul is one of Lucifer's biggest thrills. As long as Riona and Marc can keep things professional and north of the sheets, no problem, right?

Yeah, that worked out great in the Thornbirds, too...


The archangel continued. “Nothing distracted Gaius from his work, nothing.”

“Well, something must have.” Riona tasted the brew — some sort of licorice tea. “Otherwise you wouldn’t be setting him up to be the moral of your story.”

Ramiel’s eyebrow arched. “Sure Dee hasn’t told you this before?”

Riona curled her legs up under her frame. “I grew up in the post-Disney era, Ramiel. I know the ‘beware the danger of’ tone pretty damn well.”

“Hmm…” Long, graceful fingers pinched his chin. “Well, yes. As you know, a mortal sin, the kind that gets you sent to Hell, is all relative to the person’s own moral code. Unless they’ve declared a vow to a higher power, that is, like with Marc and the church. The Big Bad Hooha figured out that knowledge was Gaius’s pinnacle of morality, and exploited it. It’s a mini-victory every time a soul falls into darkness and becomes his property, but when that soul is a Pure Soul? Well, let’s just say the celebration Lucifer has would put a post-war tinker tape parade or the season finale of American Idolto shame. There’s nothing that makes him happier. So much so, that sometimes he gets a Pure Soul of particular interest or talent in his sight, and becomes obsessed.”

Riona jumped to the climax. “And let me guess: Gaius fell?”

“Like a senior citizen for the Nigerian lottery scam,” he confirmed. “It was a perfect set up. Turned out that the devil had saved that old apple Eve took a bite out of in the Garden of Eden. He does that, collects mementos. Lucifer took on his old angel form and rose to earth. In those days, we were still trying to keep it on the down-low that the ruler of Hell was a fallen archangel. Gaius thought he was a representative of the Big Boss. Lucifer told Gaius that the prize was his gift for all his hard work, that the apple would imbue him with ultimate knowledge. Gaius was so blinded by his pride and arrogance, he didn’t hesitate for a moment to believe it was no more than what was due him, and took of the fruit. He was under Satan’s command before he even swallowed.”

Riona felt a chill of foreboding go up her spine. “He was condemned?”

“Worse.” Ramiel set his tea on the table. “Any hell-bound soul can be reincarnated one time on Earth. But Pure Souls? Their abilities and powers as a demon are second only to fallen angels. If our kind become generals in Hell, your kind become its colonels. And Gaius, with all his knowledge gathered from all reaches of Earth, remains one of the most sinfully successful demons of all time. The only reason he hasn’t caused more damage is because he leans toward fits of uprising. Once in a while, his better nature rears its holy head and he gives his master a little bit of a headache.”

“I don’t get it,” Riona shrugged. “If that’s true, and that was so long ago, how is he still around? Why hasn’t another Pure Soul taken him out?”

“Oh, they have,” Ramiel assured with a smile that tried, unsuccessfully, to belie lack of a deeper meaning. “His earthly days have come and gone, even as a demon. But no matter what tricks and trades old Lucifer picks up, only the Big Boss can actually destroy a soul. Between you and me, I think He still holds out hope that one of Gaius’s insurgencies could pay off. He might find a way to break his bonds of demonhood. Gaius was…isa smart prick. He sees an opportunity, some loophole he can exploit, he’ll take it. Might even overthrow the devil someday, if the circumstances are right. It’s happened before, after all. Lucifer’s only had the job for about four thousand years. Before that, he was just a minion like any other. No doubt Gaius has the knowhow, he just needs the moment and the right circumstances to materialize. It’s probably the reason the Big Boss hasn’t blown his traitor-ass soul to bacon bits.”

Her eyes went lazy as she mulled over Ramiel’s story. “So, if either Marc or I betray our moral code, we’re doomed. Therefore, if Marc and I…. If we were to ever…”

Ramiel’s eyes narrowed like they were knives he meant to throw at her. “You screw Marc, you screw us all.”


Killian McRae would tell you that she is a rather boring lass, an authoress whose characters’ lives are so much more exciting than her own. She would be right. Sadly, this sarcastic lexophile leads a rather mundane existence in the San Francisco Bay Area.

She once dreamed of being the female Indiana Jones, and to that end she earned a degree in Middle Eastern History from the University of Michigan. However, when she learned that real archaeologist spend more time lovingly removing dust with toothbrushes from shards of pottery than outrunning intriguing villains with exotic accents, she decided to become a writer instead.

She writes across many genres, including science fiction, fantasy, romance, and historical fiction.