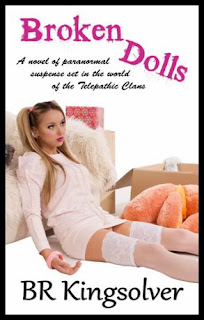 Private investigator RB Kendrick makes her living nailing cheating spouses, digging up other dirt to help in a divorce, finding long-lost relatives, and occasionally sniffing out criminal activity and fraud.

When she takes a job to find a missing girl, she has no idea she is headed for the most dangerous case of her career. Usually, her ability to read minds gives her an edge. But when the people she’s hunting are also telepaths, that advantage is limited.

The search takes her into the dark underbelly of telepathic society, where anything, and anyone, is for sale. She discovers that telepathic women and girls are being trafficked as the ultimate sex slaves.

With people trying to kill her, she’s on the run, not knowing who she can trust. Will she find the missing girl, or become a victim herself?

I walked into the restaurant to meet my prospective client, scanned the diners and slipped into the booth with her. She started to say something, then her eyes widened and nothing came out of her open mouth.

“Oh, my,” she breathed. “The description you gave me is wholly inadequate.” She stared at me for a minute, then said, “Copper.”

Confused, I looked around. There weren’t any police in there. “Huh?” I said intelligently.

“Your hair. It’s not ginger, it’s like polished copper. It shines.”

Women notice different things than men. As I suspected from our conversation on the phone, Sylvia Sanders was a norm and so was her husband. What I read in her mind matched what she told me verbally. It’s so much easier when clients tell you the truth. I understood why she had suspicions about her husband. The changes in his behavior and schedule screamed other woman to me also.

“So what do you want, Mrs. Sanders? A report, photos, a confrontation? A basic report of what and who he is or is not doing will run a thousand pounds. Photos catching them in the act are another thousand, if I can get them. Unlike the telly, most people don’t conveniently provide evidence in front of windows with the shades open. If you want to confront him in the act, I’ll accompany you for an additional fifteen hundred pounds.”

She blanched at my rates.

“If what he’s doing isn’t obvious, and I have to put him under surveillance for an extended period, my rates are five thousand a week.”

“I don’t think that will be necessary,” she said with a quiver in her voice. She gave me a thousand and I wrote down all the pertinent information.

“I’ll check on it this afternoon. I’m going to be out of town for a few days,” I told her. “If I don’t find anything by tomorrow morning, I’ll call you when I get back.”

“Thank you, Miss Kendrick. This has been going on for several months. I don’t think it’s going to change.”

“Mrs. Sanders, you need to think about what you’re going to do if your suspicions are correct. Are you going to confront him and hope he ends it? Or do you plan to divorce him? It’s something you should decide before hand.”

“I want a divorce,” she said. “I know he’s cheating on me. He called a little while ago and told me he had to work late this evening.”

Edward Sanders worked about a mile away. I took the Tube to his building. About twenty minutes after I arrived, I saw him come out and head for the Tube station. Obviously, he wasn’t working late.

I followed him and sat behind him on the train. I read his mind to get his destination, then sat back and used my phone to check my email.

When we left the tube station, I took a slightly different route than Sanders to reach the house of his mistress. I stood across the street and watched as she answered the door for him. I could understand why he was attracted to her. She was even more beautiful than what I had expected from the images in his mind.

I read her mind, also. She was the lonely trophy wife of a successful businessman who traveled often. Edward Sanders was good looking, and twenty years younger than his mistress’s husband. She wasn’t in love with him, but considered him a wonderful diversion. He wasn’t in love with her, either, but was infatuated that such a rich and beautiful young woman wanted him.

The shades in the living room weren’t drawn, and the amorous couple started their activities immediately upon his entering the house. I pulled my camera from my bag and walked across the street and across her lawn. There was a small tree in an ugly plastic pot sitting in the middle of the lawn, and I had to detour around it.

I could see glimpses of the lovers through the living room window, but reflections in the glass prevented me from a good view. It appeared he was doing her on the dining room table. This was going to be the easiest thousand pounds I’d ever made.

I was so focused on what was going on inside that I didn’t see the hole hidden by the small tree sitting in front of it. I should have realized what a potted tree was doing on the lawn. Someone planned to plant it.

I took a step and my left foot found only air. The world spun around and the camera slipped out of my grasp. My chin hit something hard and I bit my tongue.

When I came to my senses, my right leg was sticking straight up and the rest of me lay twisted in the bottom of a hole. My chin felt like it was on fire, and my tongue hurt like mad. It took me some time to get myself situated and crawl out onto the grass. I looked back. The hole was about two feet deep. I spit, and a spot of bright red blood landed on the green lawn.

I picked up my camera and checked it to make sure it was still working. Looking around, I didn’t see anyone. I waited until my head stopped spinning, then crept up to the window. They were still going at it on the table. I took some pictures, but had to wait for them to shift positions so I could get his face. After a few minutes, I had all I needed.

A sudden noise behind me caused me to turn around. A white-haired woman with binoculars hanging from her neck stuck her head out of the window of the house next door.

“You clumsy cow,” she shouted at me. “Get out of the way. You’re blocking the view.”

I retreated in a hurry, and she raised the binoculars, trained on the window through which I’d been snapping pictures.

Case closed. I walked back to the Tube and went home, holding a handkerchief to my still-bleeding mouth.