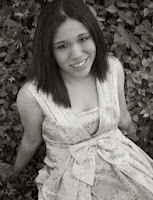 Isabel Saenz is a recent college graduate from McMurry University in Abilene, Texas.

During her undergraduate career, she participated in numerous extracurricular activities including involvement in a women’s social club. Her far-reaching imagination allowed her to take up writing as a means of releasing negative energy and stress relief. She finds inspiration in the most unlikely of places.

While Death of a Socialite is her first novel, she has also penned numerous stories under the Fiction Press pseudonym of LuckyLady’10. Currently, she manages a blog entitled Grad Angst, which is aimed to provide a forum for recent college graduates to adjust to post-graduate life. She is now a graduate student with a focus of International Relations at St. Mary’s University in San Antonio, Texas.

I let the story flow because I get too technical with planning things out.

Yes, they do because each one of them has strong personalities that demand to be the center of attention.

I would rather have junk food than anything else, particularly, sweets like cookies and cake. Mexican food is my favorite hands down.

I would like to do a tour of Europe because of their long history, artwork, and architecture. Since European countries are so connected to one another, I would like to see the uniqueness in each country.

Not at the moment. I hope to incorporate some of my travels into my work later in my career. I have been to South Korea and loved my time there. I would like to feature some of my experiences there in my work in the future.

Yes, I do! My musical mood is really dictated by what I’m writing. I have multiple playlists for each mood and different projects that I am working on.

Death of a Socialiteis a psychological thriller that explores the recesses of guilt and focuses on freedom. In order to be truly free, one must rid themselves of guilt in order to explore. Mixed in the story are flashbacks that allow for the reader to experience what the character is trying to come to terms with. Most importantly, Socialite deals with relationships, particularly abusive ones. In order to recover from an abusive relationship, one must find the courage to stand up to those who haunt you (whether it be a former romantic interest or friends) and take control of your life. Courage is certainly difficult to muster, but it just takes one “I’ve had it” moment in order to shape yourself into the person you want to be.

It’s hard work. It’s constant promotion of yourself, which takes time out of writing. When you’re starting out, you need to invest more time in promoting yourself and your novel. Promotion is going to make you more successful. If you’re shy about promoting yourself (I know I was), just step back and access what you want out of your publishing experience. As a writer, all you really want to do is write. But that’s only half of the battle. You have to see it through until you’ve reached your personal goal for the book.

I would have started promoting the book earlier. Since releasing it, I’ve been teaching myself how to reach the greatest amount of people in a short period of time. Marketing your book is a long term task, but it is something that you will have circulating for the rest of your life.

My experiences with people have greatly influenced my writing, mostly through character shaping. Interactions with people are important because it helps you to make your characters more real. People have emotions, goals, and fears. Characters must also possess the same traits in order to be believable. Also, life experiences have shaped my point of view of various situations that I come across that I reflect on in my writing through my characters.

You don’t need an English/Creative Writing degree in order to write a novel. There is no amount of classes that you can take in order to prepare yourself for churning out a masterpiece of your own accord. All you need is an imagination in order to take off and lots of practice. I’ve been writing for seven years in order to prepare myself for the first book. Time is what really helps you refine your personal style.

That’s a hard one. At the moment, my favorite book is The Shining by Stephen King. I can’t wait for Doctor Sleep to be released in September! I also adore J.K. Rowling’s work, which is not limited to Harry Potter.I greatly enjoyed The Casual Vacancy and hope to get started on The Cuckoo’s Calling soon!

Blurb of your latest release

Dianne Sincili knew that beginning her second year at Miriam University would be rough, but she could not foresee the events to come.

After stumbling upon a sight she was never meant to lay eyes on, Dianne now finds herself stuck in St. Julieta’s Hospital for the Mentally Reserved. As she tries to reason with not only herself, but the circumstances that put her in this situation, she places the blame on two of her former friends turned enemies. Devin Alexander, her ex-boyfriend, and Vicente Bynum, his roommate, fall upon the backing of Chi Psi, The Fraternity that seeks to control all aspects of life at Miriam. Due to their methods, Dianne’s credibility and reputation have been ruined. But when the Brotherhood threatens her sanity, she promises not to back down.

When the death of a fellow St. Julieta’s resident forces Dianne to put her theories concerning the Brotherhood to the test, she must venture, not only into the ghost of her past, but also consider the turbulent stories of the other residents. More than her own life is held in the balance as similarities in stories of the residents come to light. Friendships, loyalties, and love hangs in the balance as Dianne ventures into an abyss without the guarantee that she will ever see the freedom she desperately craves again.

The website for the novel is http://deathofasocialite.com/ where you will find an extended preview, author bio, and a link for purchase. Also, I write a blog about graduate school life called Grad Angst. The link is: http://gradangst.com/ . I have a Fiction Press account http://www.fictionpress.com/u/467858/LuckyLady-10 . Last but not least is my Author Central: http://www.amazon.com/Isabel-Saenz/e/B00EKQKAVO/