I'm an all-around artist who's taking his first step into the world with being a novelist. I love films and they're my biggest inspiration when it comes to writing. Not so much about referencing films, although there's some of that in "Lie". Someone once told me that my writing style is like reading a film, which made me all sorts of proud.

I try to create stories that are real with bouts of surrealism. I'll get better with age and I hope you stick around to watch me gray.

I tend to plan enough. I start off with the basic idea and soon after for some reason, the ending comes. Then I bounce between building characters and the world. While that's going on, I write story notes and the three feed off of each other. Once I feel that I've done enough planning, I get to try to make sense of the scattershot mess. Mostly, arranging things in a linear fashion. How many checkpoints I have depends on what the story tells me I need. Some short stories were written from a one-sentence prompt. Others took pages. Neither mean that the end result will be short or long. I like to plan and earn each checkpoint, but I'm writing a story with me winging it most of the time. I like the challenge, but I don't think it'll be something I do often. Or at all, if this turns out to be a horrible, horrible idea.

I've learned that the longer the story is, the less control I have over the end result. Poems and microstories are great for control. What I had planned for "Lie" and what I ended up with stopped syncing the further along I got. Things started drifting apart toward the middle. My original idea was to make the second half more like the last third. Even then, the characters didn't want to listen. Idette was supposed to be much more of a victim in the last third, but she wasn't having any of that nonsense. Not no way, not no how. And there's a character interaction between her and another character at the very end that was demanded by that other character. They were supposed to interact, but not in that way.

I'm a guy with simple tastes so hand me a plate of macaroni and cheese and we'll be alright. Bonus points if it's sprinkled with garlic salt.

I'm a frustrated night owl. I want to stay up late more because I'm ever so much more comfortable with the night, but I can't find a reason to. Then I wake up practically at the crack of dawn, miserable. Maybe I should plan double-features...

I'd love to go to Paris for a very silly reason. Most go for that tower or that church or that museum. At night, I wanna be in a Parisian apartment on the second floor, with the balcony doors open, getting into a heated debate over cinema with someone and a flute of red wine. I can't tell you how excited merely writing that made me.

I was gonna answer "not really", particularly since it'd be "book" for me, but then I thought about Edithshire and the last third of "Lie". Edithshire, imaginary as it is, rests in England, and I'm a Yank. So that kinda sorta counts, right? Then there's that final third... if you can tell me where that is, I'd love to hear it.

Not only that, I make soundtracks for certain projects. Normally, I'll just pick a musician or genre to listen to until the pen stops. Lately, it's been Bowie, but more often than not, it's been a genre of music that I call aural cocaine, Eurobeat. Give Mad Cow's "I Want Your Balalaika" or any of the remixes of D. Essex's "Boom Boom Fire" a listen. The interesting thing about "Lie" is that I built a playlist of mellow, female-centric songs like Delerium's "After All", Jesca Hoop's "Money", and Blue Stone's "Deja Vu", but I stopped listening to it as time went on. I felt that the tone set by them was in my head so I could listen to everything under the sun. Something about the Blue Stone song: it was supposed to be used in the story. I wrote a scene that involved Modjo's "Lady" that would've made the Blue Stone scene redundant, so I bitterly got rid of it. Someday...

"Lie" is a surreal dramedy about four women who go on a getaway to help one of their own through a life-changing situation. It's also a revenge against generic female characters in fiction. Women like the ones I've known and know need better representation.

That it's SO hard to get people to care about your novel.

Next time use dynamite. But seriously, as hard as it is for me right now, I wouldn't change anything. "Lie" isn't a story that the majors (or the minors) would jump on to publish, and I wouldn't want them to. I know too much about the publishing game and am too independently minded to wanna get picked up. Because I'd either be asked to make a lot of changes or would get pushed to the back of the line. That's not to slight "Lie". I'm VERY proud of it, but I'm not fooling myself into believing that it's anything but a slow burn.

Cinema and music. I could either go on for paragraphs about them and how they've affected me, or keep it terse. Methinks it's better for all if I go for the latter. I will say that I hope more people watch Sion Sono (authors will appreciate "Strange Circus") and listen to Jesca Hoop (start at the top: "Kismet").

Get rid of your deadbeat friends and prepare for no one to care about your work for a while.

I finished reading last night what might be my favorite book, actually. The biography of Marlene Dietrich written by her daughter, Maria Riva. It's such a great, multi-tiered history lesson and character study. I don't think either were her daughter's intentions, but there they are. 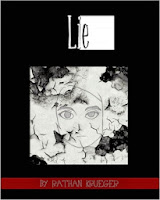 Four women go on a getaway to help one of their own through a life-changing choice in this surreal dramedy.


On the surface, "Lie" is about a group of four women who go on a getaway to a cottage to help one of their own through a life-changing problem.

Underneath the bridge, "Lie" is an attack on bland female characters in modern fiction.

Wherever you look, it'll be a lot of fun.

Quinevere Ainsworth is the one with the problem. Under normal circumstances, she's quiet but with the right accident, this white-haired comic book geek can be quite the companion.

Fantine Karoly is quiet under pretty much all circumstances. In her defense, she's a rather shy teen. She'd much prefer to watch films or let her mind drift to faerie folk. Her aunt, however, wants her out of her shell and feels that this getaway will do her a world of great.

Veronique Karoly is a middle-aged woman with no regrets. Save for how her niece acts sometimes. She's done it all in life, and sometimes twice. The only thing she loves more than Fantine is being a woman.