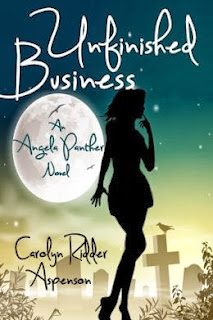 
Sometimes the dead need our help and sometimes we need theirs.

ANGELA PANTHER HAS A PERFECT LIFE:  A lovely home, an attentive, successful husband, two reasonably behaved children, a devoted dog and a lot of coffee and cupcakes. But while her life might border on mundane, she's got it under control. Until her mother, Fran dies-and returns as a ghost. It seems Fran's got some unfinished business and she's determined to get it done.

Now Fran's got some nifty celestial superpowers and isn't opposed to using them to levy a little ghostly retribution on her granddaughter's frienemies and even her own daughter, which doesn't make Angela happy.

While Angela's shocked and grateful to have her mother back, she's not thrilled about the portal to the afterlife Fran opened upon her return. Now every ghost in town is knockin' on Angela's psychic door, looking for help-and it's a royal pain in the butt.

Carolyn Ridder Aspenson tackles, with comic cleverness, the serious subjects of mother-daughter relationships, death and raising teenagers in this smart, funny take on the love of family and the uncontrollable paths our lives take.

"It's about ghosts, the love of family, the never-ending love of mothers and daughters...add some humor and it's the perfect combination of adult/chick- lit/paranormal (all in one book)." - The Book Trollop

"Aspenson hits the ground running with her debut novel and carries the reader along on a rollicking adventure highlighting both the joys and conflicts of mother-daughter relationships." - Katrina Rasboldhttp://www.carolynridderaspenson.com/