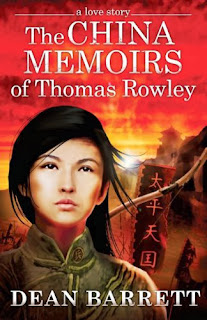 
China's Taiping Rebellion (1850-1864) was one of the bloodiest conflicts in human history; The rebels fought to overthrow the Manchus who in 1644 had defeated the Chinese and established the Ch'ing Dynasty.  The Taipings were opposed not only by Ch'ing forces but by  western adventurers and professional soldiers who formed their own private armies: men such as America's Frederick Townsend Ward and England's Charles "Chinese" Gordon.

Among the fiercest and most-feared soldiers of the Taipings were the divisions of beautiful women warriors dressed in gorgeous silks who often fought independently from men.  These were known as “the silken armies.”

"WINE hollows" the Chinese called them.  Whenever she smiled her dimples would appear like delicately formed tiny moons at each end of the lovely curve of her lips.  The jasmine scent of her incredibly fine waist-length black hair, her dark brown apricot eyes, her almost perfectly oval face, her complexion as smooth as polished jade.  I have been privileged to have these memories of all that she was with me throughout my life.  But even more than her physical beauty I recall her mischievousness, her playfulness, her way of tilting her head and looking at me in mock displeasure as I tried to please her.  The pride she took in being a Taiping woman warrior.  Her courage in battle.  Her poise and confidence as she rode her stallion.  The expression on her lovely face when I held her in my arms for the last time.  And the poignancy of our final kiss.

Of course, I had no way of knowing when I led my men out from Shanghai to search for local Taiping rebels that I would never see Frederick Ward again; and that my life would change forever; that, in truth, it would no longer be mine and I would lose the life I had known to a higher and far nobler cause than playing soldier: serving a beautiful Chinese woman warrior as her slave.  And, when permitted, as her lover.

All of us admired Ward for his bravery and of all the officers I was perhaps closest to him, but he was a rather straight-laced fellow always contemplating the next battle.  And, I might add, impatiently looking forward to it.  But out of his earshot over a few cups of John Barleycorn I often speculated with his other officers about persistent rumors that Taiping women warriors were mostly young and often incredibly beautiful.  We had yet to meet them in battle but we knew that, whatever the truth of their looks, their fervent devotion to their cause was no fiction: The Taipings practiced a bizarre and fanatical version of Christianity holding allegiance to the "Heavenly King" himself based in their capital of Nanking.

Buddhist and Taoist temples were razed to the ground.  Prostitutes reformed or were beheaded as were opium dealers and adulterers. No tobacco, no opium, no alcohol, no wine, no polygamy, no illicit sex.  And in the areas of China which they controlled they had banished the foot binding of women. Without doubt, Taiping women were not the type to be at the beck and call of a man.

Visit the author at www.deanbarrettmystery.com