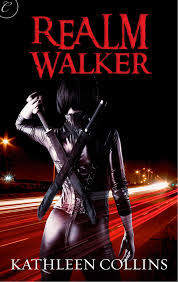 An estranged mate, a mangled body and a powerful demon who calls her by name…

As a Realm Walker for the Agency, Juliana Norris tracks deadly paranormal quarry using her unique ability to see magical signatures. She excels at her job, but her friends worry about her mysterious habit of dying in the line of duty without staying dead. That's only the first of her secrets.

Even as Juliana pursues the demon, it goes after all she holds dear—including Thomas, who is back to claim her for his own. But if she can't reconcile her past and learn to trust herself again, she will lose him forever.

Kathleen Collins has been writing since Kindergarten. And while her ability has drastically improved, her stories are still about monsters and the people who play with them.

The rare instances that she actually finds some spare time, she spends it playing with her two boys. Three if you count her husband.

She is currently hard at work on her next book.