Book Spotlight: A Story of River by Lana Axe 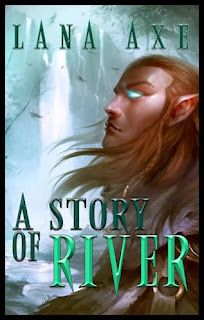 
Aelryk’s kingdom is under attack by monsters conjured by a dark sorcerer. His only hope lies far to the west, where a powerful water elemental is rumored to dwell. Along the way, he joins forces with the Wild Elves, who were once his enemy. They alone can lead him through the dangers of the Wildlands. Together, they must journey to a mysterious land of eternal spring and return before the kingdom is overrun by evil.

“I’m sorry, Yillmara,” the young elf maid said as she wept. “The child does not live.” She held the tiny bundle toward his mother, who slowly took him from the maid’s arms. Yillmara looked upon the lifeless face of her tiny son and wept softly. She closed her eyes and pressed him to her breast. After a moment, though still exhausted from the birth, she rose from her bed with her son in her arms.

“You mustn’t, my lady! You need to rest!” The maid pleaded with her and touched her arm as if to stop her, but Yillmara continued walking. She made her way from her rooms and stepped out into the light of the dawn. It was a cool spring morning, and the sound of the river danced throughout the forest that was home to Yillmara’s people, the Westerling Elves.

Yillmara approached the river slowly, earnestly. She trod lightly so not to offend the Spirit of the river. With her son still in her arms, she walked into the water and fell to her knees, begging for the life of her child. “River Spirit, hear my plea and grant my son his life. He deserves the chance to live, to grow, and to know the beauty of this forest. He should be given the chance to hear the music of the river.”

Slowly, she placed the lifeless body of her son into the water. Hoping for an answer from the River Spirit was foolish, she knew, but what matter was that compared to the life of her child. She covered her eyes and wept. As her tears hit the water, she heard a soft voice around her. It caressed her and consoled her grief. The River Spirit had come. The young mother’s weeping ceased, and she felt pure serenity. “I will gladly trade my life for his,” she said with all the strength of her heart.

With that assurance, the Spirit granted her request. The mother slid gently down into the river, and the child opened his sapphire eyes. The young maid came running to the river’s edge along with Yillmara’s life mate. The maid took the child from the river and rushed him inside to get him warm.

Though he knew his love’s body would fade into the river, Ryllak waded into the water to be near her. He could see her lying serenely in the water, her face peaceful as if sleeping. Reaching his arms out for her came naturally, but it was no use. He could no longer touch his beautiful Yillmara. She was gone forever.

The river had granted the child his life, and in time, the river would reclaim him. 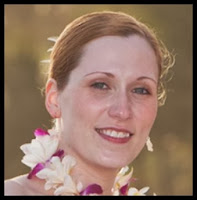 Lana Axe lives in Missouri near the edge of the woods. She is inspired by her love of nature to write about elves, magic, and adventure. Growing up in Mark Twain's backyard inspired her love of fiction from an early age. She grew up an avid reader and went on to study literature in college.

After eight years of jotting notes and building a fantasy world, she has finally begun releasing novels in her Tales from Nōl'Deron series. They will feature many of the same characters, but each novel will stand alone.