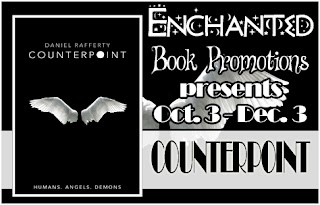 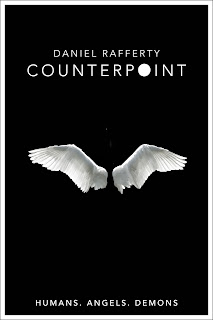 Move over “War of the Worlds,” we’ve got bigger issues to deal with now!  In author Daniel Rafferty’s “Counterpoint,” things aren’t always as they seem—but what, exactly, does that mean?   Is it time for the fight to the end between good and evil, Heaven and Hell? Is it the beginning of Armageddon and the end of time?

It all starts out innocently enough when 12-year-old Mary asks her father where he’s off to, which happens to be one of mankind’s worst endeavours, a World War.  But the story quickly moves beyond earthly boundaries, with angels, demons, the devil, archangels and even humans with supernatural powers, coming together to fight a battle between right and wrong, good and evil.  And the powers-that-be are acting on God’s behalf, but is he just watching from a distance to see what happens? What’s God’s role in all of this—and will he be back to save the day—does he even still exist?

You may think you know the storyline, with so many familiar biblical names being thrown about like fresh holy water; however, there are strange twists and turns that’ll leave you wondering who the good guys and bad guys really are. Is Lucifer actually the devil incarnate or do we humans have it all wrong?  Is Archangel Michael really who we think he is? Can all angels be trusted and are some demons good? It’s a mixed up dimension of space and time when you’re dealing with supernatural entities and human beings—and whose to be trusted?

Beyond the clear symbolism of names such as Mary, Gabriel, David, Ariel and others, what role does the Bassett family play and why does everyone seem to have plans for them?  Why have they been chosen among all other families on earth to do what they do? What have they been selected to do? Will they realize their roles in time to save the planet and the universe as we know it or are they just pawns in a much bigger scheme?

This epic tale takes places from Liverpool to London, to the Scottish and Welsh highlands and over to Dublin—but the end-game results will either be salvation or total destruction of the entire world—and the outcome is still not certain. Is God’s human experiment over—or will we continue for another millennium?  To find out, you must stop what you’re doing right now and read the pages of this exciting story! Say your prayers and hope someone’s listening!

“We know this story,” said Amber loudly, but the man continued regardless.

“These humans would dominate a planet and be free from the constraints placed upon other creations including angels. They would have free-will and be free from a life of servitude. He declared that the Human Experiment was the most important event in history and that angels would be responsible for it. They would guide and protect them. They were ultimately to consider them more important than even him. They would have to wage war for these new kids if required, and die for them if necessary. Upon hearing this, one son rose up against his father. He explained he felt these humans would be inferior to his father and all other angels, that they did not deserve this amount of attention. God struck him from Heaven and ordered his other son to lead every angel into battle and defeat him once and for all. God even created a prison for this disobedient and disgruntled son. With the war still raging, God left and was never seen again. They still wait upstairs for his return – some even believe that he will never return. Some even wonder whether he ever existed. But when it comes down to it, there hasn’t been someone in charge for millions of years. When he comes back there is going to be the biggest expulsion in his empire the galaxy has ever seen. That much I can promise you,” he smiled, his toothless grin sickening Amber.

“When God does return it’s vermin like you who will be expelled from his realm. Like an ugly boil being pricked.”

“Ah well, you see I thought you’d say that,” he chuckled, “but unfortunately it isn’t going to happen like that, dear. You see, you never let me finish my story. When the disgruntled son went to God to protest against the Human Experiment, the other obedient one was also present. It was just them three, the father and his two closest sons. After hearing what one had protested against, the boss in the blink of an eye created a prison for him to be thrust into. He instructed the obedient son to do that personally, and to destroy any followers he may have had. With that, God vanished and has never been seen since. Now, surely that begs the question,” he beckoned to Amber, his hand outright towards her.

“You’re telling me nothing I don’t already know.”

“Heaven forbid, my dear. I’m telling you the one true story of what happened. Everything you know has been scripted and remodelled to the point where it is watertight. But consider this. During that meeting the father issued his orders and vanished. Never to be heard from again. Michael charged from that meeting into Heaven and rallied its armies. Lucifer along with a rag tag bunch of others were drove to Earth and most were slaughtered. Now here’s the clincher, darling,” he smiled a toothless grin again and paused for theatrical effect, spreading his arms out wide, “the only creatures in creation that have laid eyes on God are the almighty archangels. Then God left, and no one knew what his orders were. Legend has written over the thousands of years that it was Michael ordered to banish Lucifer to Hell."

“What, and consider this greatly, darling, if it was the other way around.”


Daniel Rafferty currently lives in Belfast, Northern Ireland. He is actively engaged in writing the epic Counterpoint Trilogy Series and is also working on different pieces of writing outside this genre. This includes the upcoming sci-fi thriller Destiny: Illusions. Always intrigued with epic dramas and grand questions, which have been asked throughout the history of civilisation, he aims to incorporate dramatic stories around these questions. This provides a large tapestry in which his writing is sewn.