Book Spotlight & Giveaway: Hers to Choose by Patrica Knight 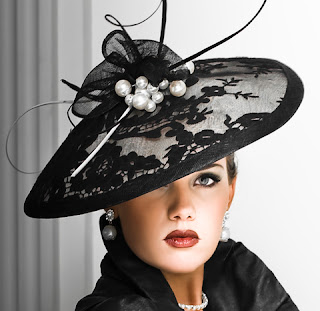 Author Bio: Patricia A. Knight is the pen name for an eternal romantic who lives in Dallas, Texas surrounded by her horses, dogs and the best man on the face of the earth – oh yeah, and the most enormous bullfrogs you will ever see. Word to the wise: don’t swim in the pool after dark.

I love to hear from my readers and can be reached at http://www.trollriverpub.com/ or http://www.patriciaaknight.com . Or send me an email at patriciaknight190@gmail.com . Check out my latest “Hunk of the Day,” book releases, contests and other fun stuff on my face book page: https://www.facebook.com/patricia.knight.71619 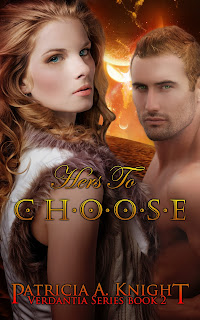 Mentally scarred from her years as prisoner to the off-world invaders, Lady Sophillia Glorianna DeLorion, doubts she can be a fit sexual partner for any man – even one whose passionate green eyes make her remember what it is to desire.

Commander of the Queen’s Royal Guard, Eric DeStroia had grown up watching the corrosive, soul-killing effects of arranged, aristocratic marriage and vowed to remain alone. But under his hardened military exterior, Eric has a kind heart. When the second Tetriarch suggests he marry a noble woman rescued from the enemy, Eric reconsiders, consoling himself with visions of sheltering a wounded dove under his mighty arm. Instead, he discovers a fierce falcon that refuses to stoop to his lure.

In the aftermath of their resounding defeat, a survivor from the enemy camp plotted a return to Verdantia to exact retribution. His first objective is the recapture of Lady Sophillia DeLorion. She had been unreachable until she went to the Oshtesh. Now, only Eric DeStroia stands in his way.

Commander of the Queen’s Guard Eric DeStroia tortured the raven–haired courtesan lying beneath him—a surging thrust in, a prolonged, exquisite slide out. With a husky laugh, he hung her on the edge of climax for endless minutes. Eric reveled in her helplessness as he reduced her to abject begging. He enjoyed their “games”. Who would break first?
Her control finally crashed, swept up by the tsunami of pleasure he created.
"Please, by all the Gods, Eric, please. Let me come. I can't take any more."
Smiling wickedly, he rolled them over, letting her ride. "Take your pleasure."
He clasped her hips and thrust into her deeply. His strong fingers dented her generous buttocks where he held her spiked on his steel-hard cock.
Inhaling deeply with a low groan, she could not disguise her hunger, her impatience. “Shall I take you with me, lover?”
“Think you can?” He grunted in amusement and shook his head. “You are too greedy, wench. You can’t wait.”
Grinding her clit along his pubic bone, she managed several long rolls, the inner flesh of her slick vagina massaging his cock with each undulation. With a groan of effort, he slammed up and held her impaled as his hips circled. Her eyes flared as the surge of pressure against her most sensitive parts swept away her dubious control. Writhing, impaled on his rigid cock, she cried out at the spectacular gratification of a long withheld orgasm. Her inner core contracted violently around him. She came forever. He choked on a grunt and finished. She barely noticed.
“Arrogant, hateful man,” she muttered, her face buried against his chest. “You might at least pretend to let me win.”
“I never pretend.”
Limp, she sprawled across his muscled chest, tracing patterns with a manicured nail. “The rumor is you plan to take a squadron of the Queen’s Guard to bring back DeLorion’s sister from the Oshtesh.”
She rolled off his chest, slowly disentangling their sweaty, delicate parts and lay on her back, trying to regain her breath. She rolled to her side, petting his broad chest. “Perhaps your arranged bride will look the other way if you are discreet.”
“No. When—if—I marry, I will be faithful. I watched my father kill my mother’s soul with his philandering. I respect women too greatly to imitate his ways.” He struggled with his anger. “You are a favorite among the courtesans,” Eric said. “Your bed won’t be cold.”
With a small moue of disappointment, she reached out a forefinger and ran it gently up his semi-hard length glistening with their combined fluids. While his heart remained indifferent to her charms, she could definitely affect a lower organ. She caught her lip between her teeth, delighted when his cock twitched in response.
“But none like you.” She flashed him a coquettish look and arranged the sheets to cover her small breasts. “You are an outrageously beautiful man, Commander DeStroia, with an extraordinary talent for sex. My body will miss you.”
Eric grunted. “I note you don’t mention your heart. Come here to me, hussy.”
He shifted to gather her into his arms, nestling her head across his chest, moving her slender thigh to rest between his. His hands wandered down her body, stroking muscles that were tight and firm, skin that felt like satin. The flesh of her small breast filled his hand. He caught the hard bud of her nipple and rolled it between his thumb and middle finger. He laughed softly at her moan of appreciation and moved over her, kneeing her legs apart and entering her already wet pussy with a gentle glide.
“Please yourself, lover. I don’t think I can come again.”
“Hmmm, you can’t?” A wicked smile quirked the corner of his mouth. He kissed her lips, nipping gently. “You know ‘can’t’ is not permitted,” he whispered against her mouth. His eyes narrowed. “I give you my promise. You will.” 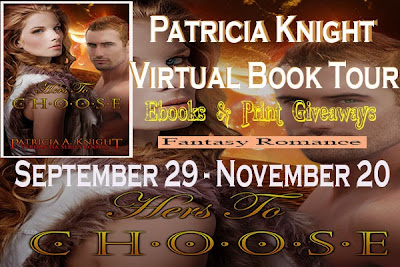 a Rafflecopter giveaway
at November 11, 2013