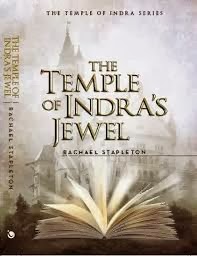 Sophia Marcil awakens from a snorkeling accident in the Lérins Islands to find herself in the chambers—and the body—of a nineteenth-century princess.

In a confused state and with no idea of her whereabouts, Sophia embarks on a desperate quest for answers, hoping she can find her way back to her fiancé, Nick, and her true identity.

After she finds a diary in an antique desk, Sophia follows a clue that leads her to a questionable alchemist, who relays the history and magic of the mysterious amethyst she inherited from her greatgrandmother— the only possession that made the leap through time with her and perhaps the only thing that can prevent her from becoming a pawn in a murderous plot for the throne.

Using her inheritance, Sophia races through time to the twenty-first century to solve the mystery of her family’s past.

But once she is there, she unearths a dire warning about a curse that clings to her heirloom, leading her down a dangerous path involving two men from different times and ultimately puts her life at risk.

In this tale of obsession, greed and passion, a woman on a journey through time struggles to regain a family heirloom and control its magic, hoping to break the curse before it breaks her.


“Prinzessin, what are you doing back here?” He scurried me through the doorway. “It’s too dangerous for you to be seen visiting.”

It was the man with the beard from the party.

He didn’t meet my eyes but mumbled fast and low in a strong German or Prussian accent while herding me through a hidden passageway behind the bookcase and down some stairs.

“Ich dachte. I told you to send the servant girl!”

We entered into a candle-lit room with an arcade of pillars and ribbed vaults holding up a low roof. The place was lined with jars and bottles.

My neck turned sharply. My eyes rolled over every inch of the lair, crammed with books, pots and corked bottles labelled in Latin and stacked on shelves that went all the way to the ceiling. One particular book protruded from a shelf, or perhaps the gleam of the fire on it caught my attention; either way, when my eyes lit upon it Rochus moved to stand between me and the book. I bumped into a table, knocking over a bottle that shattered on the stone floor.

“Damn it!” I could no longer control myself, and I began to cry. The old man stared at me for a moment, scrutinizing me from every angle, and then his jaw dropped.

“Scheiße! Something went wrong, didn’t it?”

“I think so.” I broke down and told him the story about waking up disoriented in the princess’s bed.

We sat at a wooden table, the fire burning in the hearth at our side. Hanging from the ceiling were all kinds of flowers and herbs, all jumbled together and releasing heady fumes.

He handed me a cloth to dry my tears on, and to add some comfort, I supposed.

“Bitte. Magic. It never works as it’s supposed to.” He spit out, “I didn’t know it would erase your memory.”

“It didn’t. My memory is fine. It’s just, I’m not Sapphira. I’m Sophia Marcil. I’m a librarian from the twenty-first century. Do you understand? I’m from the future.”

He stayed silent and stroked his long white beard as I expelled the entire story of Nick, falling off the island’s edge on Sainte Marguerite and the swirling underwater cavern. He took it all in stride, absorbing my situation much better than I was myself.

“I’m not delusional. I realize how ridiculous this sounds, but it’s true and I can prove it.” I took Gigi’s ring out of my pocket. “This is my great-grandmother’s; it’s the only thing that seems to have made the journey with me.”

He continued to just stare. I realized it didn’t prove a thing. Such items were available in this time. I cursed under my breath and slipped it on my finger.

I held my hand out to him. The old alchemist peered at the ring gleaming in the firelight.

“Pieces of the Delhi Purple Sapphire! The Princess showed it to me once. She wore a chip of it in an amulet around her neck, always hidden beneath her dress.”

He examined it for another two minutes. When he spoke again, his voice was unexpectedly deep and calm. “So the tale is true.”

If he felt surprise at the situation we found ourselves in, he did not show it.

“You … Sapphira came to me in the middle of the night over a week ago desperate for help. She believed her brother, the Prince, was in danger because she was about to refuse marriage,” he said, handing over a mug of dark, strong-smelling liquor before taking a swig from his own.

“I read that! In her diary! That’s what led me to you, but marriage to who?”

“I do not know. My name is written in her book?” He didn’t look happy, but he went on. “Mein großmutter had the sight. Her Serene Highness required me to look into her future.”

“Your grandmother was clairvoyant?” I said, beginning to understand his accent a little better. I sniffed my mug and took a small sip. The strong taste of brandy took my breath away but made my throat warm.

“I’m not as gifted as mein großmutter was, but I have her book and I can work potions and spells, so I gave Sapphira an enlightening potion instead. Or rather I’d thought I’d given her one.”

He turned and looked at me as though I had just asked what the sun was.

“What do you think, mein lieber? A potion to enlighten, of course.”

“So this potion brought me here or switched us? Did you create some sort of worm hole in time? Can you do that?” I spit my questions out rapid fire, letting all my anxiety spill out.

“A worm hole? I have no conception of what you mean, but I must know more of your magical jewel.”

“Mmm hmm.” He grimaced. “Didn’t you just tell me you’re from a future time?”

His mind was faster than mine, despite his mad scientist grey hair.

He disappeared over to the bookshelf for a moment and returned with a thick, small book bound in marbled calfskin. The one that had caught my eye earlier. Opening it a third of the way, he read for a moment.

“Have you ever heard of the Temple of Indra?”

“That sounds familiar. I think Gigi told me once of an emperor who used a jewel from that temple to control the empire, but it was just a bedtime story.”

“I’m afraid not. The Temple of Indra Jewel, also known as the Delhi Purple Sapphire, is very powerful, believed to affect time. That ring you wear is covered in its chips. 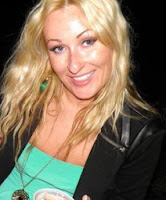 Rachael Stapleton grew up in a small town, writing as a hobby until the age of sixteen when she was given the opportunity to pen a column for the Orono Weekly Times. Today she is a dedicated writer who contributes to a weekly writer’s circle and is also a proud member of the Writer’s Community of Durham Region.

Rachael lives in Ontario, Canada, with her husband and two children.