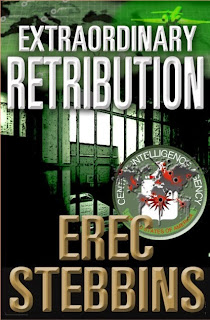 Sometimes evil is not born of madness, but madness of evil.


The Priest. Betrayed by church and state. The Whore. Punished for the crimes of a nation. The Wraith. Now, there will be payback, and it will shake the foundations of American democracy.

Follow CIA agent Sara Houston and Catholic priest Francisco Lopez as they pursue the killers of his brother. What they will find will uncover the darkest secrets of Washington.

But their hunt is not alone. As they uncover a conspiracy deep in the intelligence community, they discover that someone else is pursuing the same subjects: a killer bent on a revenge so terrible, it is only matched by the crimes committed against him.

In the end, no one escapes unscathed, no beliefs will go unchallenged, and no wrong will escape the terrible, final, and extraordinary retribution.

"A FAST-PACED INTERNATIONAL THRILLER...THE TWISTS AND TURNS OF PLOT CONTINUE RIGHT UP TO THE LAST EMOTIONALLY-CHARGED PARAGRAPH" -Midwest Book Review

"AN ADDICTIVE PAGE TURNER AND HEART POUNDING THRILL RIDE... AN ABSOLUTE MUST-READ. YOU WON'T BE ABLE TO PUT IT DOWN." -Internet Review of Books

By the time he reached the razor-wire, the Syrian landscape had shrugged off the delusion of the irrigated greenery around Damascus. Here, the Old Man, the desert, could not be hidden and refused to be banished. Cold even in the oppressive heat, crueler than the scalped links fencing out trespassers, the sands smiled sadistically, remembering centuries of slaughter and dreaming of future screams of anguish.


For the man in the truck, gazing across the landscape, the screams returned to him now. Howling, gasped,
panicked. His own and many around him. Images of dank stone, blood and waste-soiled cells. Eyes. Faces.
Tormentors and their hideous tools. The weeping of grown men echoed inside his mind as the winds stirred
the dry sands around his vehicle. He squeezed the steering wheel tightly, refusing their summons, determined more than ever to rise above their damage and demons. He had come too far to be defeated now.

He stepped out of the begrimed pickup truck and slammed the door. Glancing over the barren land, he
followed the fence line to the horizon. The entrance was at a large distance around the perimeter of the
compound, hidden in part by an outcropping of desert rocks. His well-paid sources had been accurate: an
entrance from the rear would likely go unnoticed. Andwhat madman would ever break into this place? He did not expect vigilance.

He moved around to the back of the truck and untied a dusty canvas covering the bed. Underneath were
several heavy crates. He opened each, removing weapons and explosives, strapping them to his body, and moved to the passenger side of the vehicle. From the glove compartment, he removed a map, glanced at it
fleetingly, and pocketed the ruffled pages. It was memorized.

Night fell quickly in the deserts of Syria. In the darkness and desolation, short metallic clips sounded and fell mute on the empty sands. As a shadow, he passed through an opening cut into the gray outlines of the fence and vanished into the blackness.

Through the sandy winds sweeping across the compound, lights twinkled from a handful of incandescent bulbs. Near the gated entrance, he left a guard inside a small shed, seeming to doze peacefully, the unnatural angle of his neck observable only at close range. Before him, a desolate stone structure was dimly outlined by the band of the Milky Way, a single window of light visible in the darkness. Voices could be heard, at
times loud and rude, spilling clumsily from the room. Harsh, staccato bursts of laughter confirmed the presence of the prison guards inside. He darted past the window and pressed himself flat against the compound walls. He slid along the rough surface toward the door, arm raised, his hand ending in an extended, metallic cylinder. He made no sound until he spun and kicked in the flimsy wooden door.

He saw four men around a small table, cigarettes in their mouths, pornography and cards strewn haphazardly across the stained wood. As the door swung madly on its hinges and smashed into the wall, they jumped, confused, turning toward him. Even that small pause meant death.

He fired several shots in the confined space. The explosions were amplified and echoed throughout the stone chamber, spilling down the poorly lit hallway opposite to the gunman. Two of the men arched, their heads snapping backward as the bullets blew open their skulls. The whitewashed walls were sprayed red. As the
other two men lurched upward and towards him, he spun, his right foot arcing like a sledgehammer coming
down, whipping the nearest man backward onto the table. Glasses shattered, and cards dispersed as the
guard rolled roughly and fell hard on the stone floor.

The intruder channeled the momentum of the spinning motion, and his gun hand came whirling around toward
the second man, who now stood unprepared, barely having obtained a fighting stance. His attempted blow
was smashed aside, and his jaw shattered as the man’s gun arm brought the metal crashing downward. All four guards now lay still around the table, two dead, two unconscious.

The assailant aimed his weapon at the guard near his feet, firing directly into his head. He then turned and
aimed at the other prone figure, rendering a similar judgment. He studied the faces carefully. “At night, five
remain once the others leave for the day. And Mahjub works late.” He didn’t need to be told this by his informant. Yes, he knew Mahjub worked late. He would never forget. Nor would he forget his face. Mahjub was not in this room. He must be….below. He had been busy, perhaps.

But not now. By now, he would have heard the shots.

He would be afraid.

Two floors below, buried deeply in the Syrian sands, a long hallway with numerous cells ran its begrimed
course. Broken men were locked behind stone-walled enclosures with iron doors. The cells were like graves: shallow pits scraped into the rock, devoid of light or even the space to stand. At the far end of the hallway, opposite the stairs, was a small room without a door.

Inside Mahjub Samhan clutched a knife in one hand and a pistol in the other. Both hands shook as he cowered behind an upturned table in the middle of the room. He cried out in a high-pitched voice.

“Kamil? Saif?” There was only silence. “Bassam? Nadeem!” He wiped the dripping sweat from his eyebrows and tried to focus toward the stairs. A solitary bulb dangled limply from exposed wires in the middle of the hallway. His left leg began to shake. “Answer me! Who is there? What is happening?”

Suddenly, before he could focus or react, a shadow seemed to leap from nowhere, an explosion slapped his
ears, and the bulb burst. Shards of glass rained on the stone floor like small bells. A terrible darkness blotted
out his vision. In panic, Mahjub screamed, firing shots wildly into the blackness.

A bright light leapt from across the darkness, blinding him. A sizzling rod landed only a foot away from the
table. Momentarily confused and distracted by the fire, Mahjub stared down at the stick burning beside him. Explosive? Too late, he turned his weapon toward the sound of rushing footsteps from the hallway, the searing afterimage of the flame obscuring his sight.

A gunshot rang. His right shoulder exploded in agony. His knees buckled, and he fell backward against
the wall, releasing a howl of pain as he slid to the floor. He dropped the knife from his left hand and reached
over to hold his injured shoulder, grimacing as he felt the warm blood coat his arm and fingers.

Visit the author at