Book Spotlight & Giveaway: Catch a Wolf by A. Katie Rose 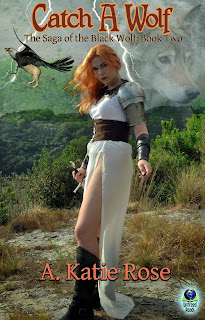 Raine, Ly’Tana and the others escape Brutal’s trap, but with dire consequences. Kel’Ratan has been grievously injured, and Rygel must take him to safety to save his life. Yet, they are not out of danger. A monstrous storm called the Wrath of Usa’a’mah has halted their flight from Khalid and they must seek shelter within a remote monastery or die under the storm’s power.

But High King Brutal has allied himself with the deadly assassins, the Shekinah Tongu. The secretive clan has sworn out a Blood Oath against Rygel in retaliation for his leaving their brothers in the forest to die. With their hellish hounds and Brutal’s dark wizard, Ja’Teel, they track Raine and Ly’Tana through the devastation left by the storm. Raine leads them into the west, toward Ly’Tana’s home of Kel’Halla, with Brutal’s menace confronting them at every turn.

As he finds himself falling in love with the exotic Ly’Tana, Raine is plagued by a mysterious voice in his head. Is he going crazy? In Raine, Ly’Tana discovers the one man she cannot live without. However, an evil entity has targeted Ly’Tana, bent on her destruction. How can Raine, Rygel, Kel’Ratan and her griffin bodyguard, Bar, keep her safe from its vast, unseen power?

Who will catch Raine and Ly’Tana first? Brutal and his pets – or the wolves?

Thus begins the second novel of the Saga of the Black Wolf series. 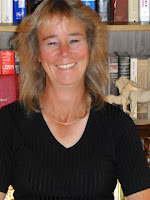 A. Katie Rose is a Colorado native, and earned her Bachelor of Arts degree in History from Western State College in Gunnison, Colorado. She enjoys riding, teaching and learning from horses, likes camping, reading novels, watching movies and, of course, lives to write fantasy books. She currently works as a photographer in San Antonio, Texas, and is a slave to her six cats and four horses.  “In a Wolf’s Eyes” is her first novel.

2 prize packs containing $25.00 gift card to Amazon.com, a mouse pad, a notepad, a coozie and a coffee mug.