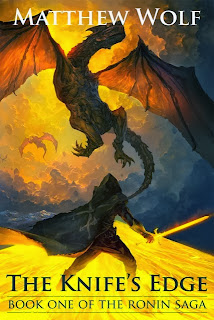 At the same time, a young man discovers his best friend with a sword in her stomach and dark wings sprouting from her back.  Guards rush onto the scene, accuse him of the act, and he is forced to flee.

In a new world without his memories, Gray must find his way amid legends and darkness, as he wrestles with an elemental power inside himself.

A power all too similar to the infamous Ronin...

Vera inhaled the incense that burned in the brightly lit room.  For once she relished the scent and its hidden meaning.  On any other day she would complain beneath her breath about its putrid sting as she walked past the Oval Hall, watching as stands of people flocked and clamored to get nearer the great chambers.

Today, however, was different.  Today, the incense smelled sweet.

Her face glistened with clean sweat as she judged the others in the room, heads bent.  Seven women surrounded her.  Each stood on one of the seven points of the star of Magha.  The star itself was perfectly inlaid into the rare white marble floor with its veins of gold.  Each point stood for one of the elements of the great kingdoms.  Inlaid in the center of the star, was a large flame of red glass.  It was the symbol of the Citadel, and sat right beneath Vera’s feet.  All the elements were present, but one.  The forbidden element of wind was always conspicuously absent.

The women surrounding Vera breathed heavily as well, the sound resounding off the walls of the giant marble and gold chamber.  Their foreheads were speckled with the same sweat of strain.  Yet they stood backs straight, wearing similar looks of loathing.

They fear what they don’t understand, a voice echoed inside her head.

Vera took in their stares and noted their different strengths.  Merian stood on the emblem of flesh, Sara, water, Tamiko, earth, Resa, sun, Eliwyn, fire, and the others she did not know. The only thing they shared was that they were years older than her, and nearly all of them despised her.

With a portion of the spark Vera delved into her mind.  She twisted a strand of water with a thicker thread of light.  Any trace of dampness was sucked from her dress, like poison drawn from a wound as it was simultaneously straightened and smoothed—a useful trick she had learned.

A sudden stream of pain jolted Vera as if a small firework erupted within her brain.  She gasped and fell to her knees.  Looking up, she saw Merian had snapped the Link tight.  The Link was a connection of visible gold between her and the others, like a wagon-wheel’s spokes, stemming primarily from Merian.  For that mere moment, the Link between all eight women glowed brightly, dimming the sun’s radiance.

The other women gave Merian curious and not entirely disapproving looks.  All except one.  Eliywn looked at Vera with sympathy.  It was well known that the use of pain outside each individual Trial was strictly prohibited.

“Do not use the spark during the trials for anything but the trials themselves,” Merian snapped.  “At least not until we are done with you.”  The girl paused, lips pursed, as if she were thinking up something truly cruel to say.  “And I would save your energy if I were you.  You will need every morsel you can conjure to not fail miserably in the next Trial.”

Vera brushed her fall of auburn hair behind her ears and rose to her full height.  There was a fire in Merian she had not seen until now, and she nearly applauded the woman for showing her backbone.  Then she eyed Merian’s red robes.  The robes of a Reaver.  Vera looked around the room at each woman.  Each bore the robes of a full Reaver—a title Vera craved to hold more than air.

“Neophyte Vera, you have completed the Sixth Trial.  The final Seventh Trial will begin now.  You may proceed when ready,” Merian quoted line for line.

With the veil of obedience, Vera smiled thinly.  “As you wish, Reaver Merian.” Each woman looked like coiled desrah snakes ready to strike, and Vera grinned, inviting it.  Together, the women attacked.

Spokes of light flew forth, striking at Vera from all sides.  She threw up her hands, erecting a shield of light.  The spokes of light moved through her shield like water, racing towards her.  Too strong, she knew.  Seven Reavers could not be bested by any but an Arbiter in a match of raw power.  The Seventh Trial was not one of strength, but a test of spirit.  It was not meant to be won.

Vera summoned a shield of darkness.  It spread from her fingertips, curling and spreading in the air.  Her gaze narrowed like an arrow’s sight on Merian whose eyes blazed with hatred.  She unleashed her bottled rage and power with a scream, uncaging the tendrils of living darkness, but in the last minute wove threads of moon to disguise the power’s dark form.  The light and darkness collided with a powerful crash and an earth-shaking clap rattled the room.  The bars evaporated like mist.  Yet in the moment before their collapse, the darkness funneled up the spoke of light and sunk its teeth into the wielder of the Link.

The thunderclap of air blew the women back as it sent Vera to her knees.  She watched through a torrent of wind as robes and cloaks flapped wildly.

A foul smell like burnt hair made Vera cringe.  Yet outwardly, her face remained placid.  Resa, a bull-like woman, spoke, “Never has that test been countered with a shield of moon.  They are not entirely opposites, but somehow, it worked.  Truly remarkable and worth the coming ceremony—the youngest to pass the seven trials in history.  Congratulations, Reaver Vera.”

“Congratulations,” the other six said as one.  With the Link intact, their voices were a single hum.

“Merian, sound the chime,” Resa ordered.  “It is complete, the Citadel must know.  The ceremonies must commence. She has passed the Trials.”  She hadn’t noticed.  Neither had the others.  There was a stark silence.  The seven women’s eyes widened in sudden recognition, their feelings connected through the Link, Vera knew.  As one they looked to Merian.

The woman knelt, her wide-eyes brimming with horror and incredulity.  “My power is gone!” the woman shrieked, and then unleashed a bloody cry that sent chills down Vera’s back.

“Merian!”  The women rushed, swarming around her and dropping the golden glow of the link.

Resa was the first to Merian’s side.  She touched the sister’s forehead and recoiled with a gasp.  “I cannot heal her.  It is far beyond my skill.” Resa grabbed Tamiko.  “Take her to an Arbiter and quickly.  Perhaps they can grab the spark before it recedes too far and is gone completely.”

Vera smiled at the woman’s shock.  Like a wide-eyed doll, she thought.  She always thought Tamiko’s hair and face too done up to be attractive, though most of the men of the Citadel didn’t seem to mind.

“Stop asking questions and go!” Resa yelled.  The veins in her neck bulged as she threw an arm to the door.  Tamiko nodded, and bolted to get help.  Resa turned to her, the woman’s eyes blazed, pierced the crowds.

Come to me, Vera beckoned with wisp of a smile and Resa rose, moving towards her.  Her heavy steps reminded Vera of a cerabul before the charge, or one of the Devari guards stalking postures, which made her think of Kirin.  Behind the woman Vera saw others.  Curious, if fearful Neophytes flowed into the room, faces pale from the sound of Merian’s chilling scream.  Eliywn rushed to Vera’s side.  Resa approached and Eliywn straightened to her fullest height, which was a hand or two shorter than Vera.

Before Resa could speak Eliywn proclaimed in a rush, “She did nothing against the law of the Citadel, and she obviously didn’t mean—”

“Leave,” Resa seethed.  It was more forceful than if she had bellowed the word.

Eliywn swallowed, bristling as if slapped, but her soft face gained composure quickly, and she looked ready to respond when Vera touched her arm.  Elywin looked to her--the girl knows not when to quit, Vera thought with a wisp of a smile.  Ignoring Resa’s direct order would meet with serious punishment, for Reaver of three stripes vastly outranked Eliywn’s one.  Vera squeezed her friend’s hand secretly.  Eliywn frowned, but she understood and grudgingly took her leave.

“What was that?” Resa whispered, breathing fire.  The woman’s body practically shook with desire to hurt Vera, likely not even with the spark, but with pure, animal-like rage.  She would… thought Vera calmly.

“What was what?”  As she spoke, the spacious hall became more and more crowded, Neophytes and Reavers alike rushing to see the cause of the uproar.  With it, whispers spread like fire.

“Heresy,” Resa sputtered, but not so loud that others could hear.  “Merian might die, if she doesn’t, the spark inside her is shriveled and likely the spark is gone from her forever!  You desiccated her!”

The word gave Vera chills—a word far worse than any curse for a Reaver.  Desiccating meant being deprived and cut from the spark, like a still beating heart carved from one’s chest.

Vera responded with silence, returning the woman’s wrathful glare with a smooth face.  Words would clearly not affect some women, she knew, no matter how profound.  Resa snatched Vera’s brown robes, far swifter than she would have imagined, and pulled her forward to whisper coarsely in her ear, “If I ever, ever see anything like that again, Citadel law or not, I will personally pluck your haughty eyes from your head, without the spark.”

I was right, Vera thought smugly and she dipped her head, casting her eyes downward.  “Apologies Reaver Resa.  My power went beyond me,” she lied. “I will learn to control it.”  That much was truth.

The bull-like woman’s thick lips peeled back in an unattractive snarl, and her meaty fist at her side lifted, as if ready to strike Vera.  Then at last, she unfurled her grip and turned on her heel, robe whisking.  She stalked out of the chambers, following the two women who held the muttering, half-conscious Merian on a cloth stretcher.

Instead of satisfaction, Vera felt a note of pity as the woman was rushed out with her attending flock.  No one should suffer that, she thought.  A thousand deaths over that fate, any day.

Ignoring the eyes of others, Vera looked to the marble floor and saw scattered pieces of age-old mosaic windows, and shreds of priceless tapestries.  Each depicted grand scenes of the Lieon, the Great War.

Suddenly, Vera remembered.  Something else that was priceless waited in her room.  She had only just found it, and she itched to look upon the sword’s beauty again.  Besides, with the eyes of others hot on her back, Vera knew there would be no flood of cheers or joyous laughter today.  The incense had turned bitter.

With thoughts of the sword, Vera pushed her way through the whispering crowds of Neophytes, heading to her quarters.