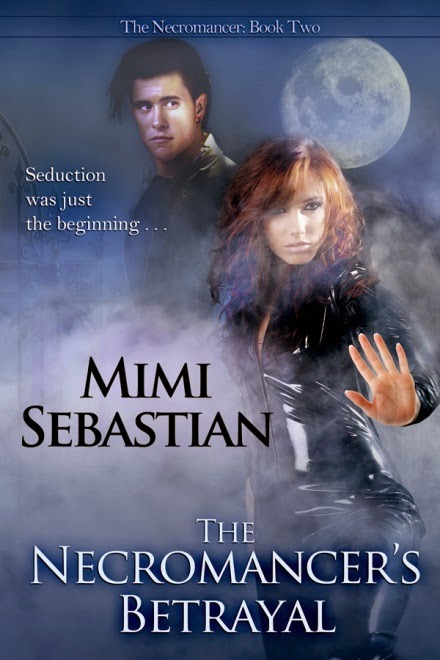 Her powers have been hobbled. Her enemies are growing stronger.

Old loves challenge her. And her worst betrayer may be herself.

Necromancer Ruby Montagne is battling for her life in the realm of demons. Unfairly branded for the death of a fellow necromancer, she’s got to prove her innocence without the full use of her magic. And the real culprit is still on the loose.

While someone is stalking her friends among the witches, Ruby searches for answers inside the dark intrigues of both the demon and necromancer worlds. Ruby must confront this new, sinister threat while reconciling her feelings for her former lover, a demon warrior. Only it’s difficult . . . because a sexy vampire is making it clear that he’d like to be a lot more than just friends.

The competition for Ruby’s trust heats up as the enemy pushes her toward a dark side that could threaten the entire realm. Yet what can Ruby do when she’s not even sure what she is? With the fabric separating the realms at stake, she must decide whom to trust. But will the ultimate betrayal be her own?

Paranormal characters seem to like their libations. At least mine do. During a supernatural ball scene in the Necromancer’s Betrayal, Ruby, the necromancer, is in desperate need of a drink after a particularly intense encounter with her former demon lover. She reviews the drink list and stumbles upon a drink called the Corpse Reviver.

She couldn’t resist it being a necromancer, after all. From The Necromancer’s Betrayal:

I leaned my stomach against the table and scanned the drink menu, searching for something stronger and more exotic than a martini. Then I spotted, to my amusement, a drink called the Corpse Reviver. Perfect. The equal parts dry gin, Swedish punch, Cointreau, and lemon juice topped off with a dash of Pernod would supply the right amount of oblivion to carry me through the rest of the night. Besides, how could I resist a drink called the Corpse Reviver?

Ruby’s libation is actually the Corpse Reviver #2. And what of #1? It’s a simple mix of one ounce Cognac, one ounce Calvados or other apple brandy, and ½ ounce of sweet vermouth. I’ve found varying recipes for both drinks which sometimes include absinthe.

Absinthe has often been portrayed as a dangerous psychoactive drug. Even if you didn’t actually become a zombie, you probably imagined yourself one. In reality, absinthe isn’t much more potent than regular spirits, and was probably maligned because in the 1800s, it was mixed with poisonous adulterants. Absinthe is featured in the Anne Rice vampire books, the movie From Hell about Jack the Ripper, and in Bram Stoker's Dracula as a key ingredient in Count Dracula's seduction of Mina Harker, in which Dracula describes absinthe as the aphrodisiac of the soul.

Another deadly cocktail is, appropriately named, the Creeping Death drink, which includes 3 ounces of dry Vermouth, 1 ½ ounces of Vodka, fill with orange juice and add a pinch of salt. I never do well with Vodka so the name makes perfect sense in my case.

Demons play a large role in the necromancer books and in the origin of necromancers. This drink, called the Demon’s Breath, seemed perfect: 1 shot Jagermeister, 1 shot Scotch whiskey, ½ can of energy drink, and 10 drops of tobacco. Yikes. Maybe when I’m done writing my necromancer series, I’ll celebrate with a Corpse Reviver, or when I’m feeling more daring, a Demon’s Breath, escape into oblivion, until the next book is due!

A hand I knew all too well rested on my shoulder. “Come dance with me.”

My first impulse was to huff, having watched him with Portia, but I smoothed my feathers and smothered the small fire that had been smoldering all night. If Ewan wasn’t going to bug me about Lysander, then I wasn’t going to disturb this quiet, soothing, if not a bit dangerous peace. It probably helped that I was just buzzed enough to agree, and maybe that had been his devious plan. I let him lead me to the floor and envelop me in his arms for the slow dance. His hesitation joined mine for a brief moment when our bodies connected, melting every nerve ending.

I can’t do this to myself.

I moved away from him, but, sensing my skittishness, he tightened his grip, pulling me against his chest. My breath caught and my body buzzed with longing and want. We danced for a few moments to let the popping world around us settle. I understood why it was so much easier to attack each other, find an irritation to mine, an axe to throw, because all of that was easier than enduring this crippling longing, feeling this gaping hole carved in my chest.

When my heart finally stopped tripping over itself, I carefully settled my cheek on the soft silk of his shirt. He pressed his lips to my ear, and his breath, tinged with whiskey and his spicy demon scent, overwhelmed me and everything, everyone around us melted in a blur. He pressed his thumb against my side, grazing until he found the round swell of my breast. I felt his smile against my cheek when I suppressed a moan. My rebellious arms somehow found their way around his neck.

“Charming.” His breath puffed against my earlobe, causing my nipples to harden.

“Confident.” He continued to rub and caught my nipple with one devious flick, eliciting a sharp gasp.

“That, too.” He tightened his arms even more. “Do you know how much I want to throw you over my shoulder, take you to my place, and make love to you? I don’t think you’ll ever understand how much I want you.” His words, whispered into my ear, soft and husky, about undid me.

“This conversation is not a good idea.” But my body screamed, throbbed to hear the rest of what he wanted to do.

“Why? Don’t want Lysander to see me kiss you?” He glided his lips across my jawbone, leaving my skin zinging everywhere he touched. “He kissed you.” His words, tinged with a note of regret, sent a violent shiver through me.

“No. Stop. What if Malthus sees?” I pushed away from him. He loosened his embrace, giving me an extra inch of space, without removing his arms from my waist.

“I had an interesting talk with Portia.” My words had the intended effect, throwing a bucket of freezing cold water over the conversation. I hated to extinguish the passion I so craved, but our talk had veered into the same morass that led to nowhere but despair.

“That was mean,” he said, his eyes clouding with frustration.

“What? Talking with her or bringing it up?”

“What did you talk about?”

He quirked an eyebrow. “Maybe I don’t want to know.”

“It’s wise not to trust anyone for the time being, but I’d be surprised if she was involved.”

“You might try talking to her the next time you’re together.”

“I haven’t been with anyone since you and I made love.” He narrowed his eyes at me. “Guess I can’t say the same for you.”

Ah, back to the pain. It almost felt better. At least we’d enjoyed most of the evening before igniting the white flag. I should have shot back at him with some retort, admonished him for judging me, but I was too buzzed and confused with guilt and readily accepted my role as dartboard for the night.

“So tell me, are you and Lysander serious? Do you care for him?” he asked.

His eyebrows shot up in disbelief.

“I’m not dating him. I’m not dating you either. Yes, we—” Frustration stifled my words. “What do you want me to do? Wait nine years? I don’t think our relationship can stand nine years of hurting each other.”

“He’s not manipulating me. You know better than that.”

“Lysander is a very old vampire, and I can assure you, he didn’t spend those hundreds of years in a monastery. He knows exactly what he’s doing.”

“Just like you know exactly what you’re doing with Portia?”

He let me pull out of his embrace. “Sure it is,” I said, before turning away from him. The bar came into view and, needing a destination, I sprinted off before he could prevent my escape. I chanced a glance back and saw Portia had claimed him for the next dance. He whirled her onto the dance floor, but not before locking eyes with me for one last, hard stare. 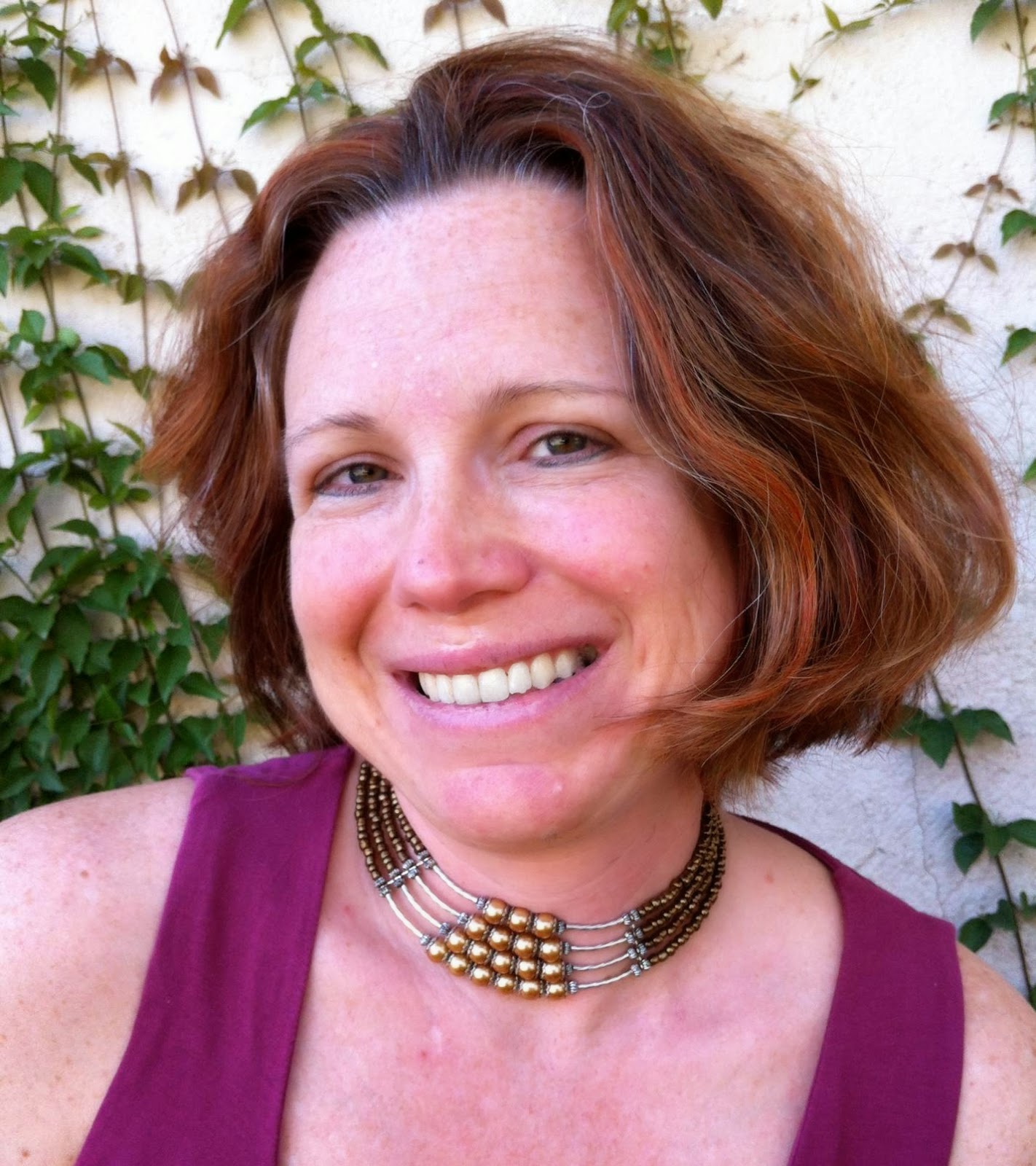 Mimi Sebastian raised herself on books and the strange and unusual, and an unhealthy dose of comics and movies. When a career as a punk guitarist failed to materialize, she completed her degree in urban planning, spent two years in the Ivory Coast with the Peace Corps, and another three years in Brazil. By day, she debates the merits of transport oriented development, by night she writes about necromancers and pirates. She’s convinced she could live off coffee, ice cream, and comic books, but is sure only one of those is good for her health.

She's a member of Romance Writers of America and the Fantasy, Futuristic and Paranormal chapter of RWA. A transplant from the beaches of Florida, Mimi now wanders the desert in Phoenix, AZ, and attempts to balance writing with a day career, fantastic family, and household diva: her Amazon parrot.

A print copy of book one, Necromancer's Seduction, zombie playing cards, and $10 Amazon gift card. Open to US Shipping