Guest Post
by Debby Grahl, author of The Silver Crescent

I’d like to thank my host, Books and Tales, for having me today.

I live in the U.S., but if I could have another home, it would be in England. I’ve visited twice and will be going back this October for fun and research.

Other than loving to write about ghosts and witches, time travel is also a passion of mine. A few years ago, while my husband and I were hiking in the Cotswold’s, we came across a strange tree with an iron ring around it, kind of like a seat. Next to this was a small earthen structure which could have come straight out of The Hobbit. Both the tree and the structure looked as if they’d been there for centuries. My writer’s imagination clicked in, and I thought what a great spot for a time travel book.

I love reading romances where the characters go back in time, but the way in which they travel has to be somewhat plausible. I’m working on a historical romance where my protagonist, Rebecca Hallowell, fresh out of college, is in London touring historic homes. An unexpected encounter with Alistair St. James, Earl of Claremont, a nineteenth century ghost, sends Rebecca back in time to discover his murderer.

Now, how do I get Rebecca back to Regency England? I’ve been playing with a few ideas using the tree and the “Hobbit-hole” I spoke of. The other problem with time travel is having the person arrive in the right period clothing and with some kind of currency or some valuable they could sell. You can’t have them arriving penniless. This also has to be something they could have had during that time period so as not to arouse suspicion.

If anyone has any ideas, I’d enjoy hearing from you.

I also love writing about ghosts, because they're so versatile. They can be mean or friendly. You can have them look like a real person, or be translucent, or be a black cloud. They can have powers or just be clumsy.

In my new release, the Silver Crescent, I have a pair of Victorian ghosts who assist Max and Elise in finding a missing fortune and solving a mystery, and one nasty ghost who opposes them. And then there is Max’s friend, Oliver, who is afraid of all ghosts.

All my best, Debby 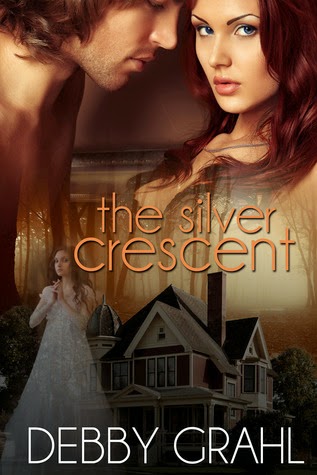 Betrayal, murder and a stolen fortune bring Elise Baxter to Cedar Bend, Michigan, on a quest to solve a family mystery—and recover the missing treasure.

Max Holt impulsively buys a crumbling Victorian mansion and fulfills his dream of restoring it as a restaurant and inn. Aware of its reputation for being haunted, he adds to the mystique by building a garden path of old tombstones, one of which belongs to the original owner of the house, Cyrus Mosby—the man whose legacy Elise has traced, and who allegedly stole her ancestral share of a Colorado silver mine over a century ago.

Following clues gleaned from old diaries and a visit from the spirit of her great-great-grandmother, Elise seeks out Max and his inn. Not knowing if she can trust Max with her family secret, Elise pretends her interest is in researching Cyrus, whose own violent death remains a mystery.

An intense attraction between Max and Elise leads him to believe she may be the girl of his dreams. But when he discovers her true interest in him and his inn, memories of a past betrayal threaten to end their passionate relationship. Elise, finding herself falling in love with Max, fears her deception may cost her more than she is willing to lose.

Once persuaded the stolen silver is hidden somewhere in the inn, and captivated by the idea of a treasure hunt, Max and Elise begin the search together, aided by the resident ghosts, Cyrus and Virginia.

The treasure hunt seems like a harmless adventure until someone tries to steal the diaries. Unknown to Max and Elise, there are others—including an evil presence—who are driven by greed and will stop at nothing to unlock the mystery of the Silver Crescent. 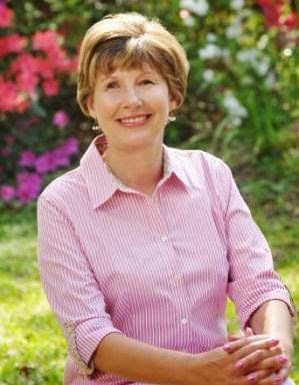 Debby Grahl lives on Hilton Head Island, South Carolina, with her husband, David, and their cat, Tigger. Besides writing, she enjoys biking, walking on the beach and a glass of wine at sunset. Her favorite places to visit are New Orleans, New York City, Captiva Island in Florida, the Cotswolds of England, and her home state of Michigan. She is a history buff who also enjoys reading murder mysteries, time travel, and, of course, romance. Visually impaired since childhood by Retinitis Pigmentosa (RP), she uses screen-reading software to research and write her books.

Her first published romance, The Silver Crescent, was released by The Writer’s Coffee Shop in January. Her next release will be Rue Toulouse, a romance set in New Orleans, due out January, 2015. Debby belongs to RWA, Florida Romance Writers, Hearts Across History, and Lowcountry Romance Writers.