Guest Post: The Tears of the Rose by Jeffe Kennedy 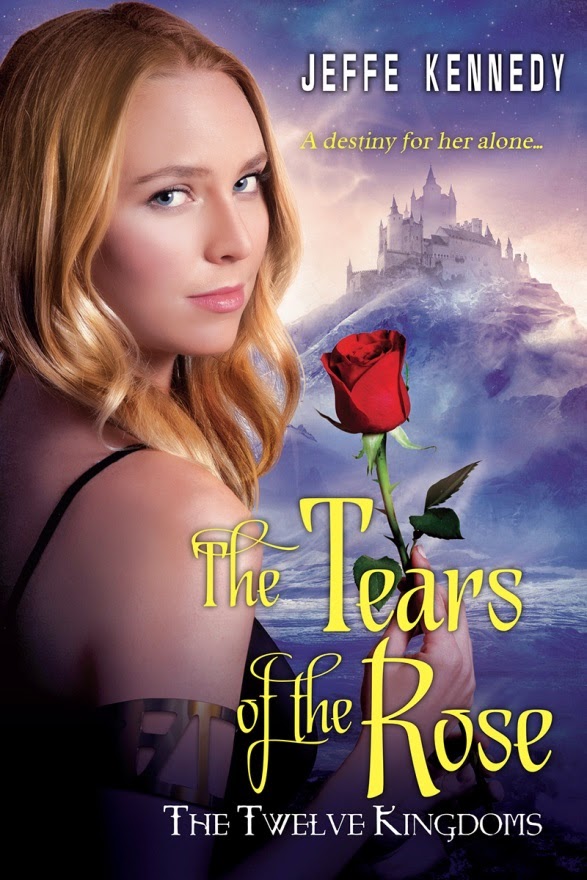 I knew from the beginning that these three books would be about the three princesses, daughters of the High King, each more beautiful than the last. What emerged as I wrote was a mythological backbone to this world of three goddesses. Each princess embodies aspects of the goddess she looks to. While the theme is present in the first book, The Mark of the Tala, the heroine of that book, my middle Princess Andromeda, looks to Moranu. As the goddess of the moon and the night, the shadows and shapeshifters, she is arguably the least structurally formal of the three. She’s a more a goddess of the individual journey and of transformation  - almost Taoist in a way.

In The Tears of the Rose, however, the story of the youngest and most beautiful Princess Amelia, the role of Glorianna and her Temple plays a prominent part of the story. Amelia or Ami has been lauded as Glorianna’s avatar since her birth and Glorianna’s temple is the official church of the Twelve Kingdoms. Part of Ami’s character growth is learning to separate the flattery and lies of others – and the deceptions of the church – from what is real.

Not always easy to do.

If you’re interested in reading one of the stories of Glorianna, I have an excerpt posted here.


Thanks to Books and Tales for hosting me today!

The eldest is the warrior-woman heir; the middle child is shy and full of witchy intuition; and the youngest, Princess Amelia, she is as beautiful as the sun and just as generous.

Ami met her Prince Charming and went away to his castle on the stormy sea-cliffs—and that should have been her happily ever after. Instead, her husband lies dead and a war rages. Her middle sister has been taken into a demon land, turned into a stranger. The priests and her father are revealing secrets and telling lies. And a power is rising in Ami, too, a power she hardly recognizes, to wield her beauty as a weapon, and her charm as a tool to deceive…

Amelia has never had to be anything but good and sweet and kind and lovely. But the chess game for the Twelve Kingdoms has swept her up in it, and she must make a gambit of her own. Can the prettiest princess become a pawn—or a queen?

Available in ebook and paperback

Night fell, heavy clouds obscuring the sky so no moonlight or starlight lit our way. We climbed the foothills in a single file, my steed in the center of the lineup with its nose in the tail of the horse Marin rode. The White Monk followed directly behind me, soldiers sandwiching us between. Below in the valley, the lights of Ordnung shone through the darkness, a beacon of civilization. Despite the warm cloak I’d been given, I shivered with the longing to be tucked inside my suite of rooms there.

So many things had been decided for me, like the cloak and what clothes I’d wear. I supposed they normally were, as my ladies and maids took care of me and packed for excursions. But they knew to include what I liked and would probably want. If I’d realized I’d be bundled along, I would have found a way to bring the doll pieces too. Instead they were in one of my trunks, bound for Windroven without me. Stupid oversight. How was I to find the missing head without the matching body?

I fretted over the error. This wasn’t the mission I’d had in mind at all. Somehow it had become entirely what Erich wanted and nothing of mine. Still, I wouldn’t fail.

Unless I fell out of the saddle first.

Hopefully we’d camp soon. Maybe after we climbed this trail.

We topped the hill, but my hopes were dashed when we re-formed into a loose knot, the soldiers making a circle around us. The disappointment brought all my discomforts crashing in. I was cold and tired and I thought my legs might fall off. I might have whimpered a little, because the White Monk, who never strayed far from me, on the pretense that he planned to defend me, rode close enough that our knees bumped.

“Problem, Princess?” he asked. Always with that mocking tone in his voice, though he kept his voice low, as we’d been instructed.

“You’ll likely have to tell Graves that you need to rest. He’s used to this kind of thing and to being with other soldiers who are, too. Not pampered royalty who never ride except for pleasure.”

“No, you aren’t.” He sounded reflective, maybe even puzzled. “You’re not being stubborn, are you?”

I laughed, trying to make it sound lighthearted and merry, which is hard to do quietly, much less when you’re ready to scream from pain. “While being stubborn might be counted among my many character flaws, I believe no one has ever accused me of being stubborn for the right reasons.”

“Have you ever ridden astride before?”

“I know how.” His silence accused me of prevaricating. I blew out a breath. “But I rarely ever did. I always rode sidesaddle because”—I felt so frivolous—“it looked nicer.”

Above the quiet snow crunching of the horse’s hooves, I heard a scraping sound and realized the White Monk scratched his bristled chin. “This is the first day of at least three or maybe even four—and that’s on the way in. If you ride beyond your ability to recover, then we’ll have to wait for you to do so. Might add another day or three, with everyone waiting on you.”

“I didn’t expect grit from you,” he finally said, after a long, thoughtful silence. It may have been the first thing he’d ever said to me that wasn’t couched as a taunt. Then he kicked his horse into a trot, becoming one of the many shadows around me. I stewed, knowing he’d gone to tell Graves that the fragile princess couldn’t handle the mission—on the first day.

After a few minutes, he returned. “We can’t stop here—it’s not secure yet—but there’s a cabin ahead. Can you make it maybe another hour?”

He laughed a little, under his breath. “Glorianna save us all if you do become Queen.”

Praise for The Twelve Kingdoms

“Will captivate you from beginning to end with a richly detailed fantasy world.” —RT Book Reviews