Book Spotlight: After the Evil by Carey Allen Stone 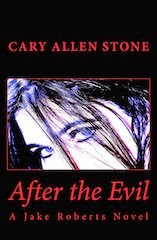 Lori Powers loved being a flight attendant because life at home was a constant nightmare of physical and mental abuse. But her own trauma paled in comparison to her husband’s sexual abuse of their only child. Emily’s suicide note blamed Lori for failing to protect her. Overwhelmed by guilt, Lori sought justice for her Emily. When she heard the voices, she murdered domineering, abusive men whose misfortune brought them across her path.

“His characters become embedded in our psyches and the pace of his unraveling of his thriller is a ride not easily forgotten. Cary Allen Stone is an important name to watch. This is one superb crime writer!”––Grady Harp, Amazon, November 2014

It is written in blood, his blood. A guy named Nicholas Parker, an airline captain. The three of us stand at the foot of the bed and stare. Harmon doesn’t speak. Mika doesn’t say a word. And even if I knew what to say, I can’t. Right up on the wall over Parker, written in dried blood red letters is––J A K E

The rest of the investigators present mostly FBI agents and locals go about the gruesome task of collecting evidence. The captain is going to be bagged, tagged and frozen in the morgue at least until the autopsy is completed.

The rest of his flight crew has been rounded up and is currently sitting in the lobby in deep shock. They are providing as much detail as they possibly can in between the trauma and the crying. A young flight attendant who can’t be more than twenty is shaking so severely they are going to sedate her. There is one crew member missing––Lori Powers.

Lightning is direct current. A bolt can account for twenty to forty thousand amperes, two hundred million volts. It is calculated to be hotter than the surface of the sun. When you are struck by lightening it leaves feather burns on your skin that slowly fade after a few days. Death occurs in milliseconds.

Sometimes, I hate to be right. Sometimes, I turn the other cheek. Sometimes, I just want to run home and hide under the covers. There are times when I wish I had never been born. I would rather have been struck by lightning than to live through this. At least it would have been over in milliseconds.

All flowers look beautiful but some are poisonous––even deadly.