Take a Journey through History with Sage Woods…

Isn’t it a thrilling feeling when you open up the pages of a book and you can be with Elizabeth Bennett as she falls in love with Darcy at Pemberley? Discover the madwoman locked up in the attic with Jane Eyre? And wander the Yorkshire Moors with Catherine and Heathcliff?

Have you ever had the feeling that you don’t just want to read a book but that you want to climb inside its world and live there? Have you ever talked about characters as if they were your friends and felt like you know them better than you know the people at your work or school?

That’s why the places and historical sites in my novel are as accurate as I can make them, as I’d love for readers to be able to travel to the places my main protagonist, Sage Woods has been to and lived in…

I’d like to invite you on a journey of the imagination – one where, if you have the time and inclination, you can retrace and relive in reality. I’d like to take you on a visual tour of some of the places Sage visits on her journey of discovery, places that exist in our real world… some that are bizarre, some haunting, some macabre, and some romantic… Let’s begin…

We start our tour in the Kentish countryside where Sage Woods lives with her family. 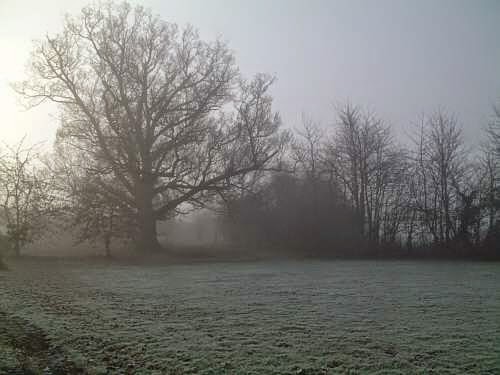 The natural, haunting beauty of the landscape allows for all kinds of supernatural occurrences:

“…the landscape retained its drenched mossy greenery. The silver birch trees shimmered against its lushness like something out of a fairy tale and, most evenings, the sky reflected the same silvery-grey hues while, during the day, it remained an oppressive and unchanging waterlogged gunpowder...”

If you thought that Bella and Edward’s tryst in a field of flowers was romantic or sexy, then Kent has a lot to offer in its local ‘wildlife’. Living close to the Woods’ family in a Gothic ruin is its mysterious caretaker – that’s if you like your Byronic hero-villains a little ‘rough around the edges’. Yet Finn also displays a sensitive side as he is often seen painting or sketching in the surrounding forest. It’s possible if you take a walk in the woods, you may meet him…

Perhaps, however, the most interesting thing about him is that he resides at Satis House, the estate featured in the famous, haunting Dickens’ novel, Great Expectations where the eccentric, reclusive Miss Havisham burnt to death. When Sage and her twin sister, Saffron, first visit the house, they have an otherworldly experience:

“We finally broke through the overgrowth and Satis House loomed before us. It was dismal, derelict, gutted – old brick seemed to buckle under its own weight and many of the windows were boarded up; those that remained on the lower floor were behind rusted iron bars. Stones jutted at awkward angles and the balustrade was crumbling in places…” 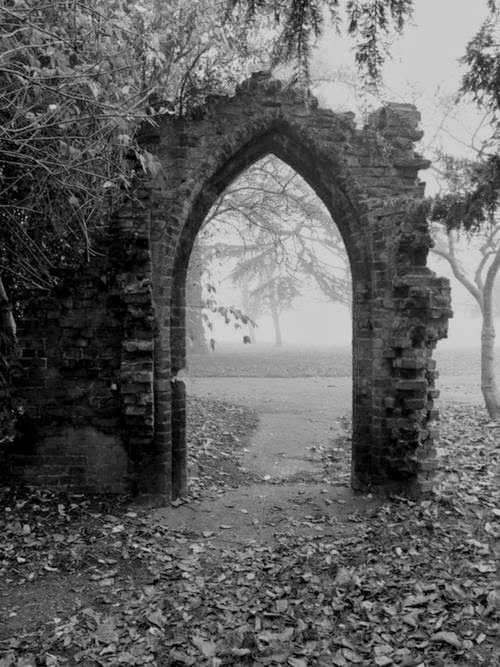 Is Satis House just another Gothic ruin or is it a portal to another world? You can find out for yourself as it is possible to stay overnight at the newly-renovated hotel that was once this grand manor (that’s if you’re not afraid of encountering things that go bump in the night…)

Next on our tour is the British Museum. Filled with ancient artefacts, relics and mummies, the British Museum is a popular tourist destination, but it is here that Sage experiences her first paranormal incident. It’s no wonder too… the museum is a mysterious, spooky place where history resides within its walls. The lives of others make for interesting stories and, if you’re interested in history like I am, you can travel through time as you gaze upon the Rosetta Stone and statues of the Pharaohs, the Elgin Marbles taken from the Parthenon, and the Viking ship found buried at the Sutton Hoo… 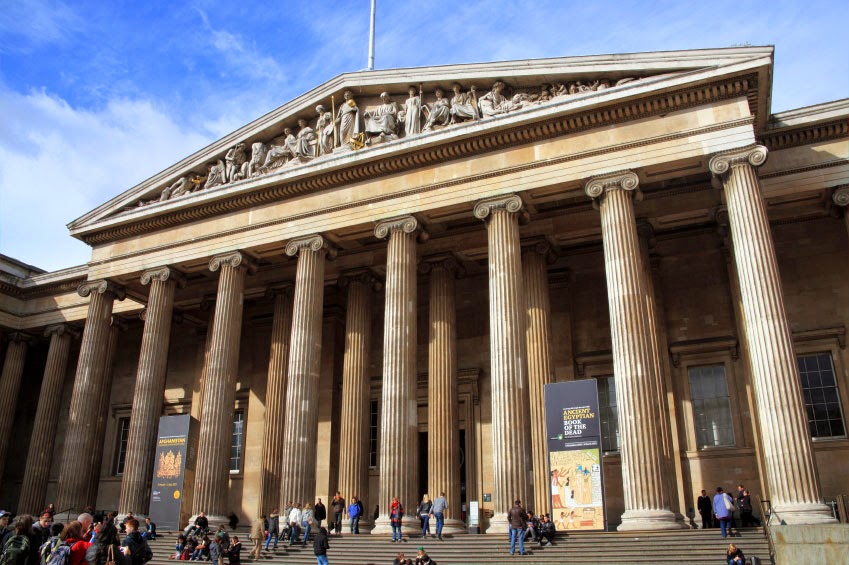 If you follow Sage’s journey in the novel, the exhibits described in the museum can actually be viewed, such as the ‘cosmic map’ from ancient Mesopotamia.

This ‘cosmic map’ explains the Babylonian view of the mythological world and is part of the mystery that surrounds Sage’s quest. But what key does it hold to her future? If you’re interested in horoscopes, the Zodiac and astronomy, take a look at some of the exhibits at the British Museum, especially in the areas featuring artefacts from ancient Mesopotamia…

It is here that Sage first meets the young, enigmatic and alluring archaeologist (move over Indiana Jones), St. John Rivers. It is a meeting that will have surprising ramifications for Sage and, in turn, for humankind…

“It was because I was so transfixed with my find that I initially failed to notice that I was being scrutinized from across the room. The first I became aware of it was a prickling sensation down my back, the hairs on my neck and arms raised giving me goose bumps. I turned my head round nervously, looking back over my shoulder … He stood at a distance, a young man in his mid-twenties perhaps, taller than average. No mere accident of lighting, his slightly curly locks, the colour of polished brass, formed a halo around a face that was much too beautiful to be called handsome. The only way to describe him was golden.”

But we’re getting ahead of ourselves. This meeting and her discovery of the artefact leads Sage and St. John to the Louvre in Paris to track down more clues and information. But that’s not the only reason visitors come to Paris – they come for the food and the art and the romance, as Paris is not the City of Love and Lights for nothing: 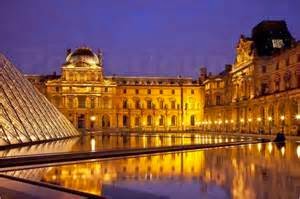 “The Musée du Louvre was garbed in Renaissance romanticism, its imposing façade now lovingly draped in the silvery tones of twilight – a fitting backdrop to accentuate its beauty. Shaped like an enormous horseshoe, the Louvre extended across the plaza’s expanse, folding its corners of open space and attempting to carry it all in its wings. The sheer majesty of its façade never failed to take away my breath…”

But the Louvre holds both menace as well as beauty, threat and the promise of reward…

Despite its surreal splendour, it is here in Paris that Sage encounters true evil … but it is St. John who saves her, finally revealing his true nature as a Nephilim.

“As I watched carefully, barely daring to breathe, the shadows lengthened, flattening against the stone. St. John’s silhouette rose between us and from his shoulders unfurled the shadow of enormous wings, spreading, expanding till it reached the vaulted ceiling. Light radiated from him, around him, between us.”

Yet as the threat intensifies, sending Sage and St. John rush off to Vatican City and the ancient catacombs that lie beneath its serene façade:

“We entered into a tiny cavity and the glow of the torch brought a new dawn to its macabre décor. The arch was crafted from hundreds of skulls – mocking me with their silent laughter. Further in, I could see that vertebrae and femurs, some yellowed with age, formed grisly curlicues and fleur-de-lis on the ceiling of the chamber while the floor was patterned and enspelled in a cadaverous pentagram.”

This is modelled on the famous Capuchin Crypt under the Chiesa di Santa Maria della Concezione dei Cappuccini – a cemetery and collection of six tiny chapels where everything, from the light fittings to the picture frames, were made from human bones. You may visit this macabre site … if you dare…

But we are whisked away from this gruesome place as Sage and St. John are then invited to attend a private conference at the Vatican Secret Archives, which is now open to the public for tours:

“The Vatican Secret Archives were said to house approximately 35,000 volumes in an estimated eighty-four kilometres of shelving, supported by their own Photographic and Conservation Studios – something that both Fi and I would have envied. Amongst the many volumes in the Secret Archives was Henry VIII’s written request to the Holy See for his marriage to Catherine of Aragon to be annulled, the transcripts of the Inquisition, as well as letters written by Michelangelo.”

If you wish to explore or debunk some of the myths, rumours and secrets about the Vatican and the Catholic Church, here’s a good place to start. You don’t need to be Robert Langdon and Sophie Neveu to embark on a quest … and I’m certain there’s enough to intrigue the most avid conspiracy buff…

Lastly, our tour comes full circle. Raise a glass of champagne and count down the New Year in style as London’s calling… 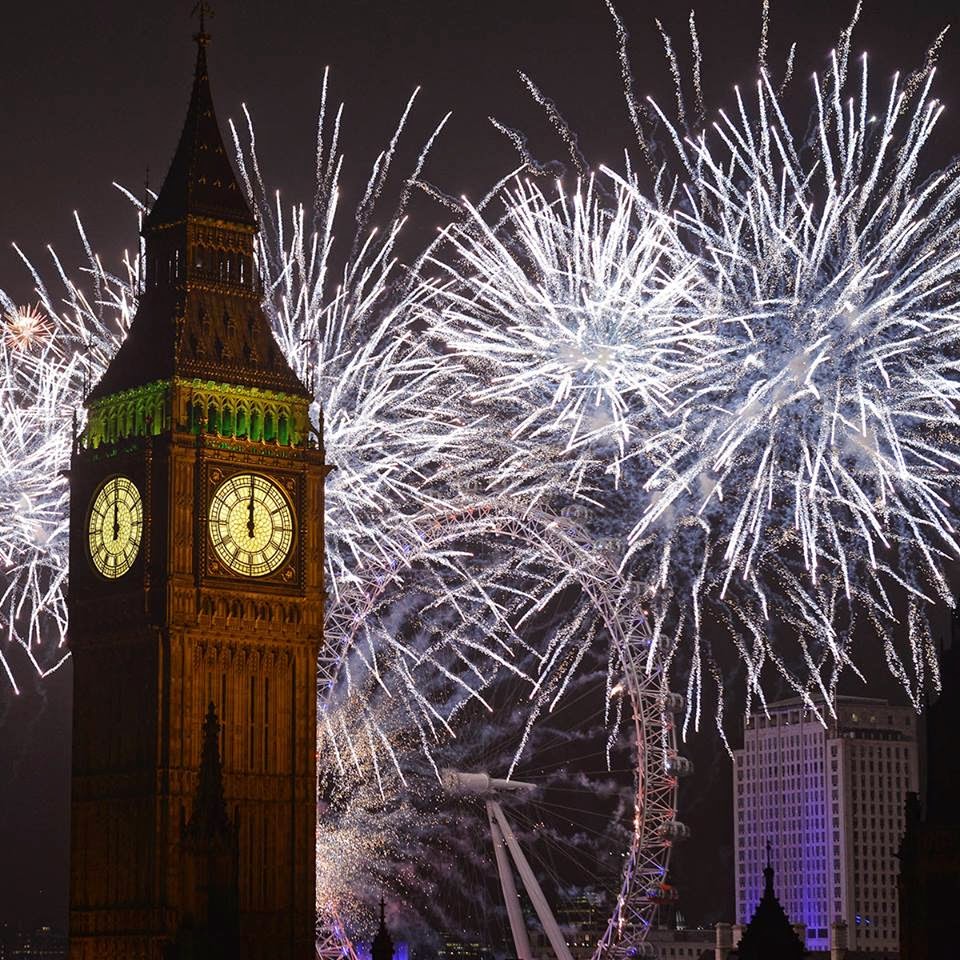 Who knows? You too may meet a Nephilim or magician or vampire in this bustling metropolis with its curious blend of ancient traditions and modern customs… 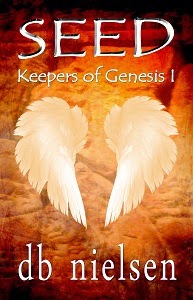 A powerful, hidden artefact is unearthed and, with its discovery, an ancient conflict is reignited. Seventeen-year-old Sage Woods, the daughter of an eminent archaeologist, uncovers the artefact’s disturbing secret and is placed in terrible danger.

Unwittingly, she has stumbled into an invisible war between two primordial dynasties of a supernatural order – a war in which she has a fateful role to play in a race to control the power of the SEED.

Embroiled in a quest that takes her from the British Museum to the Louvre to the Vatican Secret Archives, Sage realises that her blossoming romance with the mysterious, alluring St. John Rivers is inextricably tied to the artefact.

Up until now, St. John has managed to keep his true identity hidden, but Sage is determined to delve deeper to uncover his dark secret and his connection to the SEED.

db nielsen was born in British Hong Kong and immigrated to Australia in childhood. db likes to travel the world with family; dividing time between residing in Sydney and visits to the cathedrals, crypts and museums the world over, doing research for new projects. The author is a university lecturer in Linguistics and Semiotics, and continues to teach English Literature and Language whilst writing fiction.

Tour Giveaway
4 Print Copies of SEED open to US Shipping