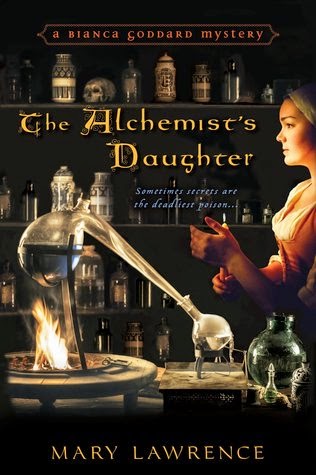 In the year 1543 of King Henry VIII’s turbulent reign, the daughter of a notorious alchemist finds herself suspected of cold-blooded murder…

Bianca Goddard employs her knowledge of herbs and medicinal plants to concoct remedies for the disease-riddled poor in London’s squalid Southwark slum. But when her friend Jolyn comes to her complaining of severe stomach pains, Bianca’s prescription seems to kill her on the spot. Recovering from her shock, Bianca suspects Jolyn may have been poisoned before coming to her—but the local constable is not so easily convinced.

To clear her name and keep her neck free of the gallows, Bianca must apply her knowledge of the healing arts to deduce exactly how her friend was murdered and by whom—before she herself falls victim to a similar fate…

Bianca Goddard is an alchemist's daughter, but don't ever call her an alchemist! Bianca has no interest in turning base metals into gold or searching for the elusive philosopher's stone. Rather, she is interested in herbs and concoctions and how they might heal the many poor of London and Southwark who seem more prone to diseases than those better off.

Her friend Jolyn visits her one day, and mentions stomach complaints that she's had for weeks. Bianca mixes up a herbal remedy for her friend, who then drops dead much to Bianca's shock. Did her remedy cause her friend's death? Or had she been poisoned before she came to see Bianca?

The local constable is determined to see Bianca hang for the death, he doesn't care whether she is innocent or not, just that someone pays for the crime, and Bianca is the easiest suspect.

Bianca is convinced her friend has been murdered, but who would murder her dear friend, and why?

The suspects are many and varied, from Mr. Wynders, Jolyn's married suitor, to her landlady Mrs. Beldam at Barke House. Pandy, one of the other girls in Barke house, who also loved Mr. Wynders. Or perhaps one of the muckrakers who accused Jolyn of stealing a ring he found. Banes, the handyman who spies on the women in Mrs. Beldam's establishment. Mrs. Beldam insists that Barke House is no longer a brothel and she is only acting out of charity, to give these poor girls somewhere to go.

But is anyone telling the whole truth? It's up to Bianca to keep one step ahead of the law as she tries to uncover the secrets everyone has been hiding.

Bianca is a wonderful heroine: strong, opinionated and her own woman. She doesn't rely on others for help, but goes after it herself using her scientific skills and observational skill to ferret out the truth.

The squalor of Tudor London is brought to life, from rat-catchers to ships quarantined due to plague. There are no fancy marble halls or silk dresses here, it's about the mud and the dirt and the determination of people to make a go of things no matter how poor or disadvantaged they are.

We get to see various parts of the book through different character's eyes, but I think I would have preferred more time with Bianca so that the reader could figure out things at the same time she did.

The author has obviously done a lot of research and nothing historical seemed inaccurate or jarring. But then American spelling was used, which brought me up short a bit. It's a pet peeve of mine with books set in Britain. It should have British spelling, not American.

The book is fast-paced and kept me intrigued the whole way through and I didn't guess who the murderer was until it was revealed, a rare treat for me.

A great read if you like your history spiced up with a bit of mystery.