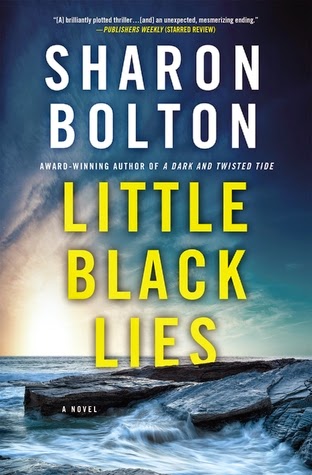 In such a small community as the Falkland Islands, a missing child is unheard of. In such a dangerous landscape it can only be a terrible tragedy, surely...

When another child goes missing, and then a third, it’s no longer possible to believe that their deaths were accidental, and the villagers must admit that there is a murderer among them. Even Catrin Quinn, a damaged woman living a reclusive life after the accidental deaths of her own two sons a few years ago, gets involved in the searches and the speculation.

And suddenly, in this wild and beautiful place that generations have called home, no one feels safe and the hysteria begins to rise.

But three islanders—Catrin, her childhood best friend, Rachel, and her ex-lover Callum—are hiding terrible secrets. And they have two things in common: all three of them are grieving, and none of them trust anyone, not even themselves.

In Little Black Lies, her most shocking and engaging suspense novel to date, Sharon Bolton will keep the reader guessing until the very last page.

I have read every book Sharon Bolton has ever written. And while I do like her Lacey Flint series, I love her standalone novels more. So when I read the blurb for this new standalone novel, I jumped at the chance to read and review. I was not disappointed for a moment.

The setting is unusual, all I know about the Falklands were that it was the scene of conflict in the 1980s and that there are penguins. The islands are a small community, so everyone knows or thinks they know everyone else's business.

Almost three years to the day when Rachel was responsible for the death of Catrin's two sons, another child goes missing. This time one of the visitor's children, but in the past two years two other children have also disappeared and never been found. No one wants to think they are living with a murderer among them and suspicion for this third disappearance falls on the visitors from the cruise ship.

But the other two children disappeared when there were no visitors. The small community is coming to the conclusion that they must face facts - perhaps someone on the islands is a murderer. It could be someone they know, someone they trust, someone they love...

The book is told through the eyes of three characters: Catrin, Rachel and Callum, Catrin's ex-lover. But all three are damaged characters and there may be a case of unreliable narration going on - Catrin is still grieving over the deaths of her children, Callum suffers from PTSD and blackouts where he doesn't know what he's done and Rachel seems to be suffering from post-natal depression two years after the birth of her youngest son.

There are so many twists and turns in the book it's like a maze and just when you think you have it all figured out, you haven't. The author knows how to keep the tension and the attention going. You just have to read on to see what happens next.

It's a book about pain and loss, grief and understanding, but most of all it's a book about characters. Ms. Bolton has created a memorable trio with Catrin, Callum and Rachel and you know that for evermore their lives will be intertwined, no matter what happens.

I did have one niggle with the book, but that's only a preference, most of it is written in the present tense, which is not my favourite for a novel. But because I love the writer, I carried on reading. And in such a tense situation, the present tense did give it a sense of urgency that perhaps past tense wouldn't have.