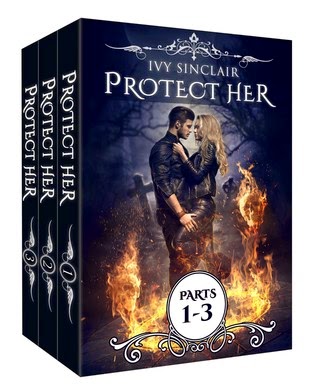 Three species that have coexisted since the beginning of time, although humankind is blissfully unaware of the predators and protectors that walk among them. But there is a new threat emerging that affects them all.

The story begins when an innocent girl is saved from certain death by a man who straddles the worlds of darkness and light. Their relationship holds the key to saving everyone.

PROTECT HER: PART ONE

Get in. Get the job done. Get out. Get paid.

It’s a simple motto that I’ve lived by for the last five years. It’s kept me alive and made me rich.

There’s no love lost between me and the supernatural beings who walk the world beside us. But when it comes to being able to retrieve valuable information from the dead, Necromancer Riley Stone is the only game in town. They know it. I know it too, and that’s why my services aren’t cheap.

The archangel Benjamin hired me to find out why he has a new demon problem. Three demon interrogations in, and the only thing I know is that the demons are in hot pursuit of a nameless young woman. She’s here on Calamata Island, and the demon officials are willing to risk Benjamin’s wrath to grab her.

But I found her first, and she’s nothing like what I expected. In my line of work, you can’t afford to let anyone get too close. But there’s something about Paige Matthews that I can’t shake, and she needs my help. I won’t turn her over to Benjamin until I help her find out why the demons are after her.

So now I’ve got a demon problem, and I’m in way over my head.

Want to know what happens to a human caught in the crossfire between angels and demons? I’m going to make sure that Paige Matthews doesn’t find out.

The job that originally brought me to Calamata Island might be done, but I can’t leave Paige behind. Without me she’s defenseless against the demons that are after her. I just met her, but I feel protective of her, and I can’t walk away. Not yet.

Paige is at the epicenter of something big, and none of it is good. It’s not just the demons that want her. The angels are in on it too being led by the archangel Benjamin.

Paige’s past is being hidden by her amnesia. Those secrets want to be let out. It’s up to me to make sure that she stays alive long enough to find the answers that will finally reveal it all.

I want Paige Matthews. The archangel Benjamin’s claim on her soul is one that cannot be easily broken, but I intend to try. Of course, that’s assuming that she would want someone like me once this is all over.

First, we have to get off Calamata Island in one piece. I know someone who can help Paige finally unlock the memories of her past. That’s the key to gaining the upper hand against the demons who are coming for her. Among those is a familiar face; a demon official who stole something from me five years ago. Having a shot at a little vengeance in the process is all right with me.

Everything’s coming to a head, and this is one fight that I intend to win. I just have to make sure that I don’t lose Paige in the process.

I wanted to ask her questions, like why the demons were after her, but her initial confusion about the attack and look of shock when I mentioned demons told me that she was a civilian. No knowledge of the ugly underbelly that prowled the world beside hers. I envied people like that sometimes. It had been a long time since I had the luxury of that kind of innocence. Unfortunately for the woman, hers was about to go away as well.

Still, asking questions and ferreting out answers regardless of her physical or emotional state was part of my job. I was damn good at it. You just needed to know the right approach depending on the person, or thing, you were interrogating.

I decided to start my line of questioning with the simple stuff and hopefully build a thin layer of trust. People, especially humans, opened up quickly to others that they trusted. “So you know my name. What’s yours?”

Her eyes swung toward mine. Her pupils were dilated and glassy. She was deep into the throes of the effects of the drug. “Paige. Or at least, that’s what I call myself these days.”

It was a strange answer that only encouraged more questions in my mind. I made a mental note to come back to it. “Nice to meet you, Paige. I wish it were under better circumstances.”

That, as much, was true. Paige’s lean, athletic body, long blonde hair, and baby blue eyes were on the money for the type of woman that drew my attention like a beacon. Her full pouty lips begged for me to reach out my thumb and caress them. Even with the dirt, dust, and blood covering her, she looked like a blue-eyed angel.

I cursed myself for being so indifferent to the current situation even as I shifted in my seat from the sudden tightness in my jeans. Clearly I’d been out of the game too long. Work was my sole focus these days, and I had forgotten how liberated I felt after a simple roll in the hay.

“Are you taking me to the hospital? I think I’m hurt pretty bad,” she replied.

“Not as bad as you think. You just need a little rest,” I said. “Why were you in the graveyard tonight, Paige?” Given that she was human, my assumption was that she was a Wiccan. They often held their ceremonies in cemeteries to bolster their spells with the energy of soil. Dead bodies still emanated quite a bit of mystical juice.

Another perplexing answer that made no sense. Demons didn’t hunt and attack regular humans for no reason. Then I corrected myself. Demons didn’t hunt and attack regular humans at all on Calamata Island. On the mainland, one would occasionally step out of line and feed on a human, but that was usually squashed quickly. It wasn’t good for anyone to have the humans be aware of the paranormal minions that walked in their midst.

There was a reason that the demons were showing up en masse and looking for her. I just had to figure out that reason, and then decide if there was any financial benefit for me in it. I wasn’t thrilled about the idea of getting involved in a demon matter, but if Paige was important to them, that could be highly profitable intel.