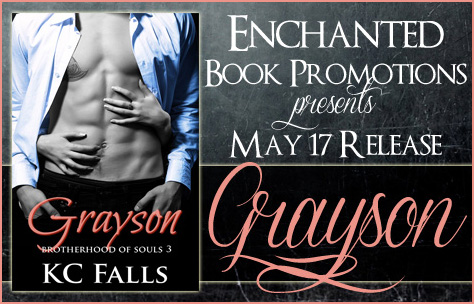 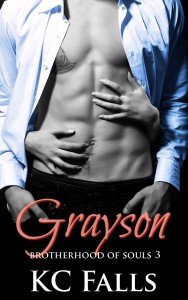 Life is all about new beginings. Sometimes you have to take big chances to reap big rewards. But the best laid plans don't often factor in the kind of chemistry that takes your breath away.

When Kara traded her bustling urban life for "Low Country" living, she didn't expect to be caught up in a dangerous drama featuring a deliciously smooth talking Southern lawyer with a cause. And she never thought the man she loved would disappear before she had a chance to tell him so.
She can't bring herself to start a new chapter. A chance discovery leads her to a risky decision with serious consequences. But the way Kara sees it, life is all about listening to yourself when your heart has something to say.

This is a stand-alone, full length romance novel. Others in the Soul Family series will follow in 2015. Meant for mature readers, this book has rough language and five-chili hot scenes.

Brotherhood of Souls Series. This series is composed of five interconnected stand-alone novels that tell the stories of Grayson, Wyatt, Darren and Noah as well as their cousin Harlen. Five young men brought together by family and tradition, a rich brotherhood of complex souls.

An introduction to their world is found in the first book of the series, Brothers. Brothers is a full length prequel to the series and is FREE at all ebook retailers.

Darren is available now. Wyatt is next followed by Noah and Harlan.

Get the first book in the series for free!

During the release, the second book in the series is available for only $0.99. Grab it while you can.
Amazon
Amazon.co.uk
Amazon.ca
Kobo Books
B&N
iTunes
Google Play

K.C. Falls is a native of New York who traded the Big Apple for Big Sky country. Her Montana ranch is home to a menagerie of animals including one human male she shamelessly uses for inspiration. Her tales are sharp-edged stories with strong sexy heroes and the women they can't resist.

K.C. finds time to feed the chickens, study Native Americana (she's part Cheyenne--that's what the 'C' stands for) and cook incredible food because there isn't a restaurant around for many miles. She writes in between bites. K.C. loves to hear from readers, so please feel free to follow her on any of her social media channels. And don't forget to check out her website. You can sign up to her mailing list there, to hear about new releases and any promotional sales coming up. You can also find some back story for her current and future works. Website: http://www.kcfalls.com Facebook: http://www.facebook.com/kcfallsbooks Twitter: https://twitter.com/kcfallsbooks (@kcfallsbooks)

10 lucky winners will each receive a box set of "Year of the Billionaire". a Rafflecopter giveaway
at May 17, 2015