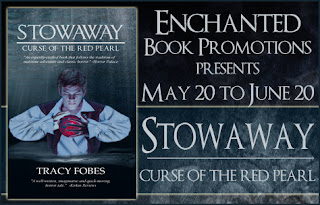 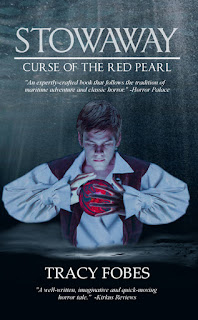 Set on stormy seas during the early nineteenth century, Stowaway: Curse of the Red Pearl features a unique plot revolving around a classic adventure that quickly becomes supernatural horror.

In Stowaway: Curse of the Red Pearl, Kit Cabot is being groomed to take over his family’s shipping fortune in 1808 Boston, Massachusetts.  While Kit yearns for the approval of his father, he finds the day-to-day operations of the family business incredibly boring.

Determined to do something more with his life, and attracted to the seafaring life of his uncle, Kit decides to stowaway on his uncle’s ship.  But instead of being swept up in the life of adventure and romance he always imagined, Kit finds himself subjected to harsh 1800’s maritime conditions and another stowaway with a sinister mission of its own.

Stowaway: Curse of the Red Pearl combines high sea adventure with dark horror, and paints a world filled with both mundane and otherworldly dangers.  It builds a claustrophobic sense of supernatural terror as Kit and his friends are forced to deal with the dangers of nature and an unknown horror possessing the ship.

Kit paused in front of the door to John’s cabin and tried the knob. Like every other door on board ship except the one guarding the grog, it remained unlocked. After looking left and right, to make sure he wasn’t being observed, he stepped inside.

Immediately the foul odor of decay hit him. He fought the urge to gag and squinted through the darkness. John’s cabin looked the same as the last time he’d seen it: dirty clothes, an unmade bunk, maps and charts scattered everywhere, and bureau drawers standing half open.

Grimacing at the smell, Kit worked his way around the clutter until he’d drawn close to the window. He lifted the oilcloth blocking one of the portholes, just enough to let a few more rays of light stream into the room, and began his search for the red pearl. The smell, he realized, was coming from a half-eaten dinner sitting on the desk. The meat portion, he saw, appeared to be a rotting ham roast, with a large bone in the middle. A napkin covered part of the roast.

He wondered where John had gotten the ham from.  The rest of them had been eating salt beef for weeks.

Frowning, he steered clear of the dinner and looked through books on the shelves. He opened burlap sacks and pushed clothes aside. He found a lot of strange items, including a shriveled monkey’s paw and a half-eaten apple. But he saw no sign of the red pearl.

He wrinkled his nose. The smell coming from the dinner seemed to be growing worse. Curious, he turned around to examine it more closely. He picked up a food-encrusted fork and poked at it. It had a squishy skin on it, dark tan like cooked pig hide, and the meat in the middle appeared very light in color. He pushed the napkin back a little and saw that the roast seemed to stretch further out than it should. Kit assessed it through the gloom in the cabin.

No pig he knew of had a leg that long.

He leaned forward to grab the napkin and pull it off the roast entirely, then hesitated when something caught his attention. He thought he heard a very faint scratching sound. Like mice. It seemed to be coming from John’s sea chest.

He swiveled back around and walked over to the sea chest. Gently, he laid his hands on its wood-and-iron lid. The lid felt warm beneath his palms. And pleasant, somehow. Enjoying the sensation, he pressed his palms harder against it. The scratching in the chest became a vibration that communicated itself up through his nerves like a strange kind of music. He realized he was swaying a little on his feet, but he didn’t let go. There was no chance of him letting go. Not when it felt like this.

He cocked his head to one side, listening. If he tried hard enough, he almost heard whispers in the scratching. A little drool ran down from the side of his mouth, but he paid it no attention. He was trying to understand what the whispers were saying. His gaze was fixed on nothing, but in his mind’s eye, he saw the sea, and the flash of silver-bellied fish beneath its surface, and deeper in, where the water became very dark and heavy, something else, something big and monstrous and tentacled, with a gleaming slick surface and intelligent, purposeful movements. Not blinking at all, he focused on it. And yet, the image of it didn’t scare him. It only made him curious.

He saw the tentacled being slowly moving up from the depths, and he knew if he stayed still long enough, it would find him. Still, he couldn’t move, he hadn’t the will...and then the darkness sluggishly rose from the depths to invade his mind—gently, carefully, like a lover embracing his heart’s desire for the first time. It twined through his head with caressing tentacles that sought his core, that wanted his soul. He felt its need. Its curiosity. Without knowing why, he turned from the sea chest and shuffled back to the half-eaten, decayed ham.

He looked at the roast through a reddish-black sheen that seemed to veil his eyes, and breathed its putrid odor deep into his lungs. But it wasn’t enough, this sight and this smell. His curiosity flared, until it felt almost painful. He needed more to understand.

He picked up the knife and fork. Handled them clumsily...they felt so odd in these appendages called fingers. Using the fork in an awkward way, he pushed the napkin fully from the meat and then slid the knife into the flesh. His eyes flickered to the end of the meat. He saw the foot there, still shod in a shoe. Something inside him recognized that foot and screamed in terror and disgust, but the tentacled darkness in his mind held the scream down, smothered it.

He sliced a piece of the meat off with the knife, speared it with the tip of its blade, and lifted it to his lips. With great anticipation he slid the meat between his lips and placed it on that other sensing device, his tongue. The taste buds in his mouth reacted to the meat with a myriad of various impressions—bitter, sweet, mellow, sharp--and the darkness explored. It remembered. When it felt satisfied, he put the knife down, swallowed the meat, and moved back to the sea chest.

One of the books on the shelves began to quiver.

“Croatoan,” he said again, his voice reverent this time.

The wicker chair and the desk started trembling, too, their legs banging gently against the floor. He was only half-aware of it. His mind was still with the tentacled darkness. He was diving with the creature to the bottom of the sea, where it was cold, and black.

A thump intruded on his daydream. He half-heard, half-saw compasses and maps shaking around on the shelves. The blankets on the bunk started whipping around, too. Clothes rose up a foot from the floor and then twisted back down. Another thump sounded and he understood the bunk had jumped up off the floor. A jolt went through him at the idea of it. The dream of the deep sea creature faded.

He pulled his hands off the sea chest, startled, and everything immediately became still. He stared around him, his chin wet with his own spit, and tried to understand what had just happened. He recalled putting his hands on the sea chest, and then...and then, he seemed to have fallen asleep. And had a strange dream, about a sea creature and things bumping around in his uncle’s cabin.

He didn’t like how he’d fallen asleep standing like that. It didn’t make any sense. And now he felt sick to his stomach, too, though he hadn’t the faintest idea what had made him ill. Recoiling from the sea chest as if it were a pit viper, backed out of John’s cabin and returned to the weather deck, where the sailors finally slid Jonesy’s body from the wooden plank, into the sea. 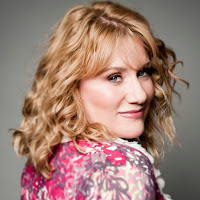 Pennsylvania author Tracy Fobes is an award-winning writer of ten novels in the categories of romance, paranormal, and horror. Prior to deciding that a literary career was her passion, Tracy gained a BS in Computer Science (minor in mathematics) from the University of Scranton and followed that path working as a computer systems analyst for the Fortune-500 conglomerate Johnson & Johnson. She now devotes herself to writing novels.

As she states, “The inspiration for a new story comes from many places: art, music, old movies, books, newspapers. Occasionally, when I'm listening to a song or looking at a painting, I feel an intuitive jolt, an unexpected click. An idea about that painting or song sets my creative impulses to bubbling. I can always tell when I'm on the right track because excitement grabs hold of me and the skin at the back of my neck tightens. The ideas that give me some sort of visceral reaction are the ones that usually end up as my stories. Stories about women and men who come together to love have always been my favorites.”

Win a paperback copy of “Stowaway: Curse of the Red Pearl”: