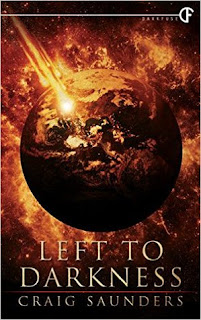 A meteor strikes the Earth. Dirt and dust fill the air. Only a few people remain under the setting skies, and those who still live find it's not God's England anymore.

It's the Devil's turn.

Lines are drawn between the dark and light. For the darkness, James Finley and his cult for the end of days. On the side of light, Paul Deacon, the lost policeman, and Dawn Graves, the last mother.

To survive, they must put their lives in one man's hands: Frank Liebowicz, a killer with a soft spot for lost causes. Because come Armageddon, God won't choose his champions.

After the earth is hit by a large meteor, civilisation as we know it is destroyed. Anarchy reins, looting, violence, murder are soon rife, and law and order are no more than words of how the world used to be. Lots of people have also disappeared, the M25 around London is now nothing more than an empty car park. All the people from the cars have disappeared. Where did they go and why are some people still left behind?

The story is told through three main characters: Dawn Graves, heavily pregnant and despairing at what sort of world her child will soon be born into. Frank Liebowicz, a thug and killer for hire, who is not a psychopath and has no particular love for violence. He does it because he's the size of a wrestler and he's good at it, it's work to him, nothing more. Paul Deacon, once a policeman, now blinded by a group of cannibals, called the Butchers, but he is saved by Frank, who in the meantime has lost an arm and is on his last legs.

An unexpected voice on Paul's police radio reveal there are more survivors holed up in a hospital in King's Lynn, including Dawn who is due to give birth any time now. They barely have time to wonder how a voice from King's Lynn even reached his radio before they find a truck and drive there, and that's when everything comes to a head. Too late, they realise they have been manipulated all along and someone is desperate to get Dawn's baby.

The book was well-written and fast-paced, but this is not a book for the faint-hearted. Some things are very gruesomely described - torture, amputations, murders etc. and at times I had to skim over those parts.

As with most books, perhaps even more with a post-apocalyptic setting, you need characters that you can relate to, or empathise with, or even hate just a little. The book certainly does this and personally I felt the most empathy for Dawn, but I was rooting for Paul and Frank too.

Half-way through the book, I wasn't sure I could read any more, as it seemed to have turned into some sort of zombie story - people eating human flesh and not dying - it sounds very zombie-like to me and I do not like zombies. It never mentioned in the blurb that zombies might be appearing, otherwise I wouldn't have gone for this book at all.

Anyway, I was half-way through and I kept reading because I was so engrossed in our heroes' journeys that I just had to see what happened to them.

The book ends on a cliff-hanger, so I suspect it is the first of a series, and again the blurb didn't mention that.

Suitable for those who enjoy dystopian fiction with a sense of the mysterious.