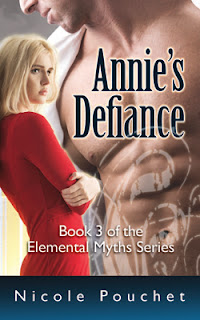 D.C. lawyer, Annie Birch, believes her life is one logical assessment after another. That changes, however, on the day she accidentally teleports during a high-profile negotiation. Knowing her new power must be a side effect after miraculously getting healed by the Incan Mother Earth goddess doesn’t help matters. Annie has already seen how emerging powers like hers also come with psycho villains that are bent on destroying her, as well as the corporeal world.

The icing on the cupcake of her ridiculous day is two gorgeous men who show up on her doorstep, both vying for her attention. Now, her choices involve much more than her oft-neglected libido. Annie is tasked to play a role in the Incan prophecy, which she prefers to watch from the sidelines. Will she stick to her safe, legal path? Or will she defy all logic to experience the decidedly more fun adventures being thrust her way?

And Ms. Pouchet certainly delivers on that score with a story that has no vampires or werewolves, but does have elementals and earth spirits. It was such an intriguing idea that I was hooked.

This is book 3, so I suggest you read the first two to get a better feel for the characters and world first, as I was a little confused in parts which referred to the other adventures beforehand.

Annie is a strong, independent woman, who doesn't necessarily need a man in her life, but she would like one. When she meets two handsome men on the same day, both having an interest in her, she is at first extremely wary.

Who are they? And what do they want from her? Can she trust either of them? I hoped the book wasn't veering off into love triangle territory, and to be fair, it didn't. I can't really say more without giving away the plot though.

The writing is good, but the book felt a little incomplete, I suppose because it is part of a series rather than a standalone. Romance, adventure, supernatural powers and characters that were very well-drawn, even those who only got a few minutes of screen time.

Enjoyable reading for any paranormal romance fan and even for those who just want something different from vampires and shape-shifting.