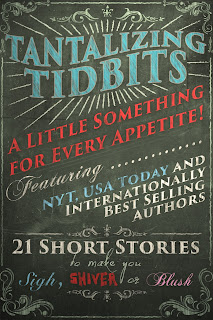 A collection of short stories written by bestselling authors, representing an eclectic mix of styles and genres. In a word, this book is a smorgasbord; an opportunity to try a bit of everything.

In the spirit of the smorgasbord, the collection is presented as a menu and authors have shared recipes which accompany each story—some fitting, some funny, some simply old favorites.

Ranging from ultra-short but spine tingling, to meatier tales that are nearly novellas there is a little something for every appetite including comedy, tragedy, fantasy, werewolves, at least one ghost, life, death, and of course love.

Dig in. We hope you find at least one tidbit you enjoy.

Savory fare for smaller appetites - short stories from a wide range of styles and genres.

No man can ever fully master memory. But maybe, just maybe, he can learn to live with it. Even be glad for it. Even if that means reaching across space, time...and the grave.

Is there such a thing as a curse? With a storm looming on the horizon, 98-year-old Ida Walsh fears a repeat of the terrible events of her childhood. Will her indomitable wit and resilience be enough to save the day?

Anne begins to question the rigid limitations of her new marriage as she spies on a mysterious neighbor.

Al'a will die at his father's hands, unless he can master a forbidden magic.

Al'a Solaris, born into the Sun Priesthood, only wanted to prove his worth to his father when he delved into forbidden magic. Now, he must die at his father's hands, to restore honor to his bloodline. But the blade his father wields is also his final hope -- if only Al’a can discover its secret and master the fire within.

Just exactly why is Bernie digging that hole?

A bushman's duty is his legacy for the tribe.

A magical journey where love knows no boundaries, the Summons combines romantic and ethereal love in a mystical setting.

A story of love, legend, and magic

Down-on-her-luck American artist Maggie Gleason returns to Ireland, hoping to put old hurts behind her. Instead, revisiting the fishing village that enchanted her twelve years before only reopens wounds – until the unexpected appearance of roguish pub owner Conall Flanagan proves that the Ancient Isle is a magical place where anything can happen and true love always stands the test of time.

When love calls across the ages…

Aspiring writer Lindy Lovejoy knows all about happy endings. But when she travels to Scotland to research Celtic myth and lore, she never expected a chance to live her own storybook romance, until a stop at mystical Smoo Cave whisks her back in time and into the arms of Rogan MacGraith, a Highland hero who’d burn up the pages of the steamiest Scottish romance novel.

In the 19th century Scottish Highlands, young Morna struggles with new motherhood, her child’s illness, and her inability to compete with her husband's idealized vision of her. Will she have faith in the magic of her dreams, and thus find the strength to save her child’s life--and her own--as she begins to recognize the truth and depth of the woman she really is?”

When Gillian Beaton meets the captivating Ciaran MacLeod, she’s immediately attracted, but is she ready to trust again? Have her demons followed her to Scotland and can new love grow out of old heartbreak?

Late one night, in the midst of a summer’s hot spell, Thomas spies Rosalind in the woods, clad only in her shift, dancing in the moonlight. It’s really more than a man celibate for three years can bear. Thomas is in danger of falling into a sin so powerful it threatens to challenge everything he thinks he knows about himself and life…

Michael wed Christina when he was nine and she was three, then promptly went about his life and tried to forget about her. Now the pair must unite to thwart the Beast, return the Power of God that was stolen by their ancestors, and save the world in an epic battle between the forces of good and evil.

*Please note, this is NOT a short story, it is an extended preview of Mary’s next novel, book III in her Sisters by Choice series due for release soon. It is a taste of things to come and while it does not end on a cliff-hanger, it is not a complete story.*

Looking for something lighter or perhaps a happy ending? The stories in this section won’t disappoint you. They are shorter and mostly romantic, or funny, or both.

Madison Monroe thinks she has everything in life figured out, until one ill-fated camping trip has her running for her life through the woods being chased by two wolves—both eager to claim her.

A woman is torn between bitter revenge and the sweetness of a second chance.

Is there light at the bottom of an empty peanut butter jar?

For Harold, giving up peanuts for medical reasons means the end of life's greatest pleasure…until his wife introduces him to all-natural peanut butter. But his addictive personality isn't satisfied with an occasional indulgence.

Eradicating wayward supernaturals has its consequences.

The hereafter may be closer than Carson Kincaid thinks when he is charged to discover what ails Laird Maclean’s mind. Can Kincaid conquer his inner demons while battling the armies of evil?

Paisley Shaw, a powerful druid, has endured her share of hardened times starting the moment Laird Maclean stormed into her life. Now, she must find a way to stop him from taking her powers before it’s too late.

When a Rose Blooms,
by Tarah Scott
Historical romance
4353 words

On the anniversary eve of his wife's death, Nathaniel kneels at her grave asking questions he fears were answered the night she died. Despite cold solitude, desire flares when he learns the woman who now haunts his dreams awaits him in the great hall. By morning’s light, she will meet him on the battlefield he has built around himself, and force him to choose between the living and the dead

Sorry for Your Trouble
by Ceci Giltenan
Vignette
1913 words

Ceci shares poignant but sometimes funny memories of the first funeral she attended in Ireland.

Always the best friend and never the leading lady, will Nina find love when she answers a quirky, sweet personal ad? 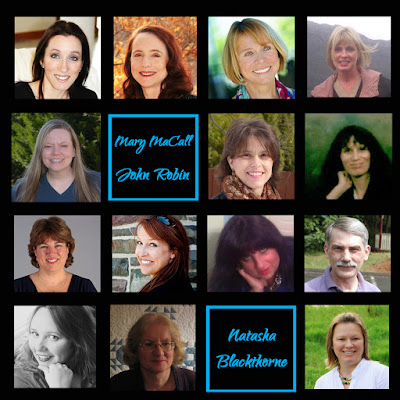