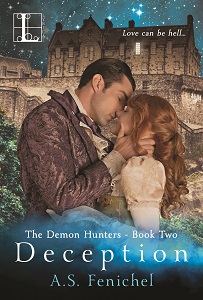 When Demons threaten Regency London, only a Lady can stop them.

Lillian Dellacourt is beautiful, refined and absolutely lethal. She’s also the most feared and merciless demon hunter in The Company. She’s come a long way from the penniless seamstress’s daughter sold to the highest bidder, and it wasn’t by trusting a man, let alone an exiled Marquis with more on his mind than slaying the hellspawn . . .

For Dorian Lambert, Marquis de Montalembert, being sent to keep track of Lillian is no mean task. He’s wanted the fiery vixen since he first heard of her five years ago. But wooing the lady while fighting the demon uprising is no easy feat, especially when the lady’s tongue is as sharp as the Japanese sai blades she favors for eviscerating the spawn of hell.

These two will have to learn to trust each other fast, because the demon master is back, and he’s planning to turn Edinburgh into a living hell…

Gripping the chair arms to keep herself seated, Lillian fought an urge to leave and never set foot inside Castle Brendaligh again.

It had been a demoralizing battle and they had lost, but they had lived. They had done all they could, but still the demon master had ascended into man’s world.

“You failed and we are all likely to die because of it. I hold every person at this table responsible for the state of England. You have ruined us.” Lord Clayton’s voice grated on Lillian’s nerves.

Accounts of the battle were clear. Nearly everyone in the room had risked their lives trying to disrupt the ascension, not to mention keep the earl’s daughter, Belinda, from becoming a demon sacrifice. Making such a show of ferocious reprimands insulted their brave and selfless efforts. If not for the fact that he was her best friend’s father, she might have indulged her desire to pull a sai blade from her boot and slice his throat.

As if Lord Clayton, the Earl of Shafton, needed to attract more attention, he waved his hands. “You had one mission, to keep the master from entering our world. All you had to do was kill one demon, but you failed. You should all be shot for treason. Treason!”

His bright red face gave her hope his heart might fail and save her the trouble of killing him.

Other hunters at the table murmured, but no one spoke out.

Everyone in this room is to blame. You had the perfect opportunity to end this mess. Now

the master is free of his realm and living in ours. It’s only a matter of time before he is strong enough to destroy everything we hold dear. When your families are killed mercilessly, will you sit here so unrepentant about failing in your duty?”

Lillian missed Reece’s steadying presence. Reece might have even been able to stop his lordship’s tirade with a few quick-witted remarks. Her partner had nearly died, and now lay upstairs recovering from demon poisoning.

“Don’t you roll your eyes at me, Belinda. You are equally to blame. You were with the master for days and made no attempt to destroy him.”

Gabriel, Belinda’s husband, bristled. It was of course a ridiculous statement. The Earl of Tullering was not used to public abuse of his family. “Just a minute, my lord. You are out of order. Belinda was in no position to defeat the demon master. The information she gathered will be very helpful in our eventual victory.”

Shafton pointed a fat finger. “I do not want to hear about information that will take years to decipher. You, Tullering, are by far the most culpable. You and that woman”—he pointed at Lillian—“made a conscious choice not to destroy the master.”

Lillian reached toward her boot and let the hard steel of her sai blade handle bring her comfort. One second and Shafton’s head could be rolling down the long table and land in Drake Cullum’s lap.

Besides Shafton, Drake and his assistant, Dorian Lambert, were the only ones present who had not been at the battle. Their leader, Drake, had attended to assign new orders to the hunters.

Shafton said, “You could have destroyed the beast as it rose and was weakened. I know you had the opportunity, but you chose to save yourself. It was selfish and stupid.”

Lillian could kill him and no one would be able to stop her. Of course, there were  always consequences when dealing with men in power. She’d lose her home within The Company. Yet another arrogant earl would not take her from her rightful place. She was in control. It was nothing like her youth and the titled man who’d ruined her life.

A.S. Fenichel gave up a successful career in New York City to follow her husband to Texas and pursue her lifelong dream of being a professional writer. She’s never looked back.

A.S. adores writing stories filled with love, passion, desire, magic and maybe a little mayhem tossed in for good measure. Books have always been her perfect escape and she still relishes diving into one and staying up all night to finish a good story.

Originally from New York, she grew up in New Jersey, and now lives in the East Texas with her real life hero, her wonderful husband. When not reading or writing she enjoys cooking, travel, history, and puttering in her garden. Her babies are both rescues and include a demanding dog and a temperamental cat both of which bring constant joy and laughter.