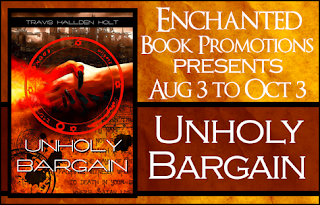 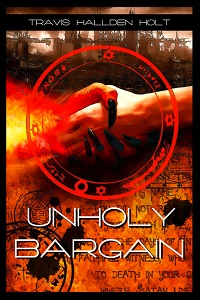 An assassin is at work—one of the best in the trade. His body turned to dust long ago, but his spirit roams the Earth freely, undetectable to the five senses. He stalks his victims waiting for just the right opportunity. Then, in quick succession, he possesses a human host and strikes down his quarry. For a century and a half he has served this way.

Deputy Sheriff Nate Barrington is riding the crest of a new relationship. Kaitlyn Spencer is beautiful, altruistic, enlightened—everything he's not. She teaches classes in New Age philosophy at her growing school. Nate doesn't share her spirituality, but the physical passion hasn't subsided enough for him to care.

Nate's nirvana quickly unravels when Kaitlyn's life is threatened on two separate occasions. With no apparent motive or any evidence suggesting collusion, the police are stumped. Even more troubling to Nate, Kaitlyn is eventually convinced she is the target of unseen forces.

A hardheaded pragmatist, Nate isn't prone to believe that spirits can possess people. As far as he's concerned, Kaitlyn's claims of perpetrators possessed by a spirit assassin are on par with comic book stories and have nothing to do with reality, and her esoteric, New Age mumbo jumbo begins to drive a wedge into their relationship. And why Kaitlyn? What secret is she hiding?

Even with the sheriff's resources at Nate's disposal, the odds for Kaitlyn's survival are not in her favor. The true enemy is virtually invisible, and Nate's conventional police tactics have no effect on the spirit world. Strikes come from anytime, anywhere, and from random, unwittingly manipulated people. Behind it all is a deal the assassin had made with the devil: send Kaitlyn Spencer to an early grave in exchange for a fresh start. For that, the assassin will stop at nothing to uphold his end of an Unholy Bargain.

The kitchen was spacious and decorated in colors and motifs of spring. Kaitlyn stood at her kitchen sink, her back to him. A sleeveless dress in a mosaic of yellow and orange clung snugly to her figure from shoulders to hips, then relaxed at her calves. She gleamed like a bloom in a meadow, and he couldn’t resist the urge to inch up behind her, part the flow of her hair with his nose, and breathe deep her fragrance.

He heard the soft exhale of satisfaction, and she dropped what she was doing to tilt her head back into the crook of his neck and cup her hands over his.

“You know I can’t pass that up. The day wouldn’t be the same without it.”

“Aw, you’re beginning to appreciate me."

“What did you do before I came along?” she asked.

“No silly, I meant the coffee.”

“Destroyed my stomach lining with gut-rot joe from the corner store on 7th and Maple.”

“You know coffee machines are sold at retail stores. Maybe your fellow deputies could pool their money and buy one for the office.”

“Been done, and that crap is even worse.” Nate smiled. “I once saw a captain use the coffee to clean oily grime off his engine block.”

The exaggerated inflection of a news anchor droned from a television in the corner, and Nate thought it too early for harsh clips of reality to invade his Nirvana. But endure he must. News at the breakfast table was Kaitlyn’s routine, and he thought it rude to suggest they do otherwise.

He sat at her kitchen table and she placed a steaming cup of coffee and bowl of oatmeal before him. The oatmeal was bursting with blueberries and strawberries. No doubt organic, he thought. Everything she prepared was organic, natural, gluten-free, and free of chemical preservatives. Whatever. He saw the results of her over-the-top health diet, had seen it stretched beneath him last night, and wrapped around him in the shower not twenty minutes ago. Hell, he didn’t care if she ate nails.

He glanced at the television screen. There was another murder in Orange County overnight, not far from a location where he staged drug buys. The on-scene reporter stood in a starched shirt and tie, yellow crime scene tape stretched across the background and alternating blue and red lights reflecting from the side of his face. The reporter relayed what little info the Sheriff’s Office leaked, and pieced together a broader picture with eyewitness interviews. Apparently a longtime resident had met his demise in a home-invasion robbery, and his wife had been airlifted to Florida Hospital in critical condition. One of the assailants was identified, and all three were on the lamb.

Nate thought of the other night, how Kaitlyn had alerted to something, like a possible invader lurking about, but then had brushed it off as nothing. She’d made some farcical excuse about leaving her purse somewhere. Nate’s years of working in a narcotics interdiction unit and dealing with layers of deception, pretending to be someone he wasn’t and outwitting dealers, had honed his detection skills. He could sniff out a half-truth like a bloodhound, and a bold-faced lie slapped him across the face.

“You ever consider getting a security system?” he asked.

She sat across the table from him with a bowl of oatmeal half the size of his. “Like what? Alarms on my windows? A dog?”

She chuckled as though he had told a joke and stirred some Stevia into her herbal tea.

“I’m serious,” he pressed. “It wouldn’t hurt to have a system installed.”

“I’ve lived here for ten years and nothing has ever happened.”

Nate wished he had a dollar for everyone he’d met who thought they’d never be a victim. “The world is changing, Kaitlyn, and not for the better. Home invasions didn’t exist before the nineties. Now it’s a regular occurrence.”

“I don’t live in fear, and I don’t allow headlines to dictate how I live my life, or how I think.”

Nate mixed a smidgen more milk into his oatmeal. “I’m just saying it wouldn’t hurt to take some precautions.”

“I appreciate your concern, Nate, but I’m fine. Really.”

Why is she so resistant?

He realized just how little he knew about her. Their connection was intense on the physical level, but they had yet to venture much outside that arena. He knew the most sensitive places on her body—where a simple caress made her buckle, where the slightest pressure of his tongue triggered tremors—but where that body spent its days he hadn’t a clue. Since they had met he’d been too enraptured to come up for air. He knew she was a teacher, yet not in the traditional sense. “You never told me exactly what you teach, and where.”

The rim of her ceramic cup hovered a half inch from her lips, as though striking an invisible force field. She set it down without taking a drink. “Here’s an idea: why don’t you come to my class?”

“No, more like a visitor. Then you can see for yourself.” She brought the tea back up, and her eyes held a gleam of challenge over the top of the cup.

“Maybe I will,” he said. You can bet your non-GMO vegetables I’ll be there before the week’s out.

Travis Hallden Holt is a former U.S. Navy surface warfare officer and veteran of the Persian Gulf War. He's worked the past twenty-two years in the corrections side of law enforcement, first in the prison system, then in the streets as a probation officer. He spent three years supervising felons in a south Atlanta neighborhood ranked the ninth most dangerous neighborhood in America, where one in every twelve residents becomes a victim of crime each year.

For years, his interests were in weaponry (both small arms and large scale), warfare tactics, hand-to-hand combat, criminal justice and unsolved crimes. But life has a way of molding perspectives, and Travis came to realize the physical world known to the five senses didn't have all the answers. It scratched the surface at best. Accordingly, Travis's interests shifted to supernatural phenomenon, spirituality, the mysteries of life, the invisible world beyond our five senses and the forces that lie therein. He's still a peace officer, but one who has mingled with psychics, mystics, mediums, energy healers, shamans, gurus, artists and denizens of the "underground."

Travis is the author of Unholy Bargain, a supernatural thriller published by Blood Moon Publishing. He resides in Atlanta, GA.