Guest Post: Why I Write Paranormal Fiction
by C. Eevenfall

Many people ask me why I write paranormal fiction and no matter how many times I hear the question, I always stammer and struggle with the answer. The reason is that the “answer” is too complex to answer in a single sentence, and I am not always sure how much time the listener is willing to give me.

The fact is that I love fantasy and all the sub-genres of fantasy. I find other worlds just as fascinating as our own and that interest spills over to the spirit world as well.

I do believe in the paranormal and am attracted to it more I think because it is a relatively unexplored frontier. Even the experts know almost nothing about paranormal phenomenon and science completely debunks it because of the lack of evidence. Nevertheless, what about all the sightings and accounts, don’t they have to mean something? After all, how long did man believe the world was flat or that leaches could pull sickness out of the body?

In my writing, I LOVE to delve into the possibilities of a paranormal world, a world that runs parallel to our own and occasionally coexists with it. I am mesmerized by the idea that certain people seem to possess special gifts and insights, that curses affect the living and that the dead can make contact with the living.

In “The Wraith of Carter’s Mill,” I combined all of these to create a story that I find believable in a setting that is very real, the rural south. Southerners, especially the old folks, have a tendency toward the superstitious. Growing up down here, I heard many a tale about such things when I was growing up. These old stories inspired me to write this novel, and future works as well.

Whether you’re a believer or not, you have to admit that there are some strange goings on in the world we live in. . .and isn’t it just plain fun to imagine the cause. 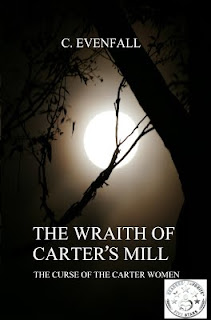 The Wraith of Carter’s Mill chronicles five generations of women from the turn of the century to present day. It depicts in startling detail the result of an old curse and the wraith that haunts the family. Sensitives, The Guardians and The Forgotten tell the tale while the fourth shocking segment, Carter’s Mill provides the back-story. It reveals the shameful truth behind a century of sorrow and the curse of revenge that plagues the Carter women.

Zeb, the Carter family patriarch, is a hard, callous man. He runs his thriving sawmill, farm and family with an iron fist. When he commits an incredible act of cruelty, he ignorantly brings a terrible curse down upon all his kin. Martha Thompsons’ prophecy proves true as the family falls into ruin, and the women pay the price.

Almost a century after Zeb’s death, a Carter daughter is born with notable yet uncanny gifts. It will be up to Shyanne to unearth a long buried family secret and set an old wrong back to rights. Will she find a way to lift the curse and banish the accursed wraith that haunts her? If she fails, she risks losing her own little girl to the dark entity forever.

A small North Carolina community, where everyone knows everyone sets the perfect stage for this suspenseful drama. Rich in history and southern culture, The Wraith of Carter’s Mill harkens back to a time when life was simpler, and superstition was part of everyday living.

C. Evenfall grew up on the Crystal Coast of North Carolina. In many ways, her community was isolated from the outside world, and time simply stood still. The old ways of “doing things” surrounded her, and she was both fascinated by the rich history and influenced by it.

As with any such place, the area was rich with ghost lore and old tales of “people done wrong.” C. Evenfall, a child seen and not heard, hovered as close as she dared, listening to the old stories when the adults got together talking about old times. She also spent many nights with the sheet pulled over her head in childish fright.

A paranormal encounter when she was just six years old, experienced by two other people at the same time, convinced her that ghosts really did exist.  C. Evenfall has been seeking answers ever since. Her fascination with the unexplainable, coupled with her love of history and southern culture and the role women play in both, have inspired her to write The Wraith of Carter’s Mill, a series of novellas. Each inspired by tales from her childhood and the family members who passed them down.

Life has taken her many places, but today, C. Evenfall resides with her husband in the same fishing village where she grew up. Together they enjoy hiking, camping, gardening and the outdoors in general. She forgives his skeptics’ dismissal of things that go bump in the night and loves him dearly in spite of it. They complement one another perfectly.