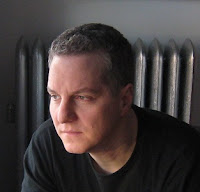 1. Do you plan everything or just let the story flow?

In the architect-or-gardener writing model, I’m a hardcore architect. There are many moving pieces, people, monsters, and other characters in the world of The Commons, and things that show up in a very minor fashion early on sometimes turn out playing a major part later on. That’s mostly planned. I have the memory of a sodden tree stump; there’s no way I could keep track of it all without outlining.

What I mean by “mostly,” however, is that I leave some flexibility between the outlining and writing phases. I use a writing-software package called Scrivener, which allows for all sorts of keywording, tagging, and reordering. I move each story event and scene up from the outline and into the manuscript as I write it, and often I’ll change up the order of events or even choose to have a different character tell that part of the story.

I can’t work without knowing what’s probably going to happen next, but I’m not beholden to it, either. That keeps things interesting for me—which, if I’ve done my job, will make the story interesting for the reader, too.

2. Do your characters ever want to take over the story?

Maybe, but that doesn’t happen. While their ideas are welcome, I’m the boss. This isn’t a democracy; it’s a benevolent dictatorship. (And trust me: that’s the only part of my life where I can say that.)

3. What is your favourite food?

I recently found a leather-bound Book of Memories from when I was a kid—one of those write-in deals where you fill in the same questions and categories each school year. When I was in second grade, my favorite food was pickled beets. (I was into specifics, apparently—and was a bit of a strange kid.)

Now I’d have to go with bacon. Crispy bacon. (I’m still into specifics, and I’m a very strange man. Not that there’s anything wrong with liking bacon, mind you.)

4. Are you a morning person or a night owl?

I’m more of a morning person, though not too early in the morning. My brain is lubricated and running relatively smoothly after my morning ride and shower. (I commute by bike.) But it doesn’t really perform until after it’s been fed some caffeine. By that point, you don’t want to be around, forced to listen to me as the ideas flow. Unless you’re my wife. She doesn’t want to listen, either, but she was foolish enough to marry me, and now she must pay.

5. Where do you dream of travelling to and why?

My wife and I have a constant mental list of places we’d like to visit. Our favorite trips involve hiking to exhaustion during the day and then enjoying good food and wine at night—call us soft, but we’re not much for roughing it around the clock—so we tend to go for places where you can combine those things. Accordingly, we’ve in mind places in Spain, France, Italy, and Austria. And for various other reasons, we’d love to go to Iceland and even Antarctica.

6. Do distant places feature in your books?

Thus far, it hasn’t been distant places so much as it’s been places from the imagination and from memory. But that will most likely change in the second book of my initial trilogy, which will see the fantastic elements and places of The Commons crossing over into our world. So that might mean everything from hard-to-reach Buddhist temples showing up in Central Park, or even moon bases appearing in the Chicago Loop.

7. Do you listen to music while writing?

Always. In fact, my writing soundtrack is a rotating array of drone and ambient that includes Stars of the Lid, Kyle Bobby Dunn, William Basinski, Loscil, Brian Eno, Eluvium, and Tim Hecker. In case my self-discipline fails, which is an ever-present danger, I have two mental switches to rely on. When the ambient begins playing and the incense is lit, it’s time to start working. I’m a creature of habit. Routine is everything.

8. Could you tell us a bit about your latest release?

The Journeyman is the first of the initial Commons trilogy. The Commons is a Purgatory-like place where, when everything’s working the way it should, departed souls go on journeys populated with their memories, loved ones, dreams, and nightmares. The way they meet the challenges presented by those journeys determines where they go from there: the next step in the afterlife or even a return to the living world.

However, the Commons has been hijacked by a corporate-raider type who’s using the life energy of the captured souls to power his own ambition. When our three heroes—a New York street kid, an Iraq War veteran, and her special-needs soon—arrive following a horrific accident, they find that their own challenge is to help the good forces operating in The Commons free it from the corporate raider.

I’m currently working on the second book of the three, which will be called The Margins. And I’m planning on writing stand-alone works after the initial trilogy, including short stories, one-shot novels, and more.

9. Who, or what, if anything has influenced your writing?

My influences are a mish-mash of poetry, movies, cartoons, comics, classic and modern fiction, and everything in between. And given that The Commons is a world built on imagination and memory, I’m able to fit in all sorts of references and allusions. In the first book, you’ll find Rudyard Kipling, T.S. Eliot, and a nod to John Boorman’s Excalibur.

If I had to point to one work that’s the heaviest influence, it’d probably be Neil Gaiman’s Sandman series. I’ve said before that if the Commons books were a cocktail, it’d be one part Gaiman to one part Bradbury, with a splash of Vonnegut, a William Gibson garnish, and a bit of Stephen King rubbed around the rim.

9. Is there anything you would do differently?

If the current publishing landscape weren’t changing so fast, I’d say I wish I’d gotten started sooner. But that would mean I wouldn’t be operating in a world where self-publishing is a real opportunity—an environment where I can get my work out there while retaining the rights to it. A decade ago, I’d have considered myself lucky to sell my rights to a publisher for the life of the copyright. Now I see that as a bullet dodged.

I was fortunate enough to be named the winner of the Soon to be Famous Illinois Author Contest, which is only open to self-published Illinois writers and is in its second year. As a part of that, I’m doing speaking engagements and appearances at libraries around the state. Again, if I were with a traditional publisher, that contest wouldn’t be open to me. And more of these contests are in the works in other areas of the country. Opportunities abound.

As is often being said these days—Hugh Howey says it all the time—there’s never been a better time to be a writer. It’s very, very exciting. 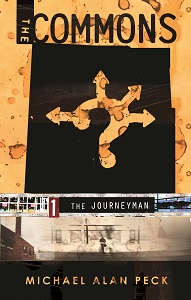 Michael Alan Peck won the Illinois Library Association's 2015 Soon to be Famous Illinois Author Contest for his debut novel The Journeyman (The Commons Series, Book 1). The Journeyman is recommended for fans of fantasy and magical realism, both teens and adults.

The Journeyman tells the story of three people who board a bus and – following a horrific accident – must band together as the last hope for the afterlife, known to them as The Commons.

“Paul Reid died in the snow at seventeen. The day of his death, he told a lie—and for the rest of his life, he wondered if that was what killed him.”

And so begins the battle for the afterlife, known as The Commons. It’s been taken over by a corporate raider who uses the energy of its souls to maintain his brutal control. The result is an imaginary landscape of a broken America—stuck in time and overrun by the heroes, monsters, dreams, and nightmares of the imprisoned dead.

Three people board a bus to nowhere: a New York street kid, an Iraq War veteran, and her five-year-old special-needs son. After a horrific accident, they are the last, best hope for The Commons to free itself. Along for the ride are a shotgun-toting goth girl, a six-foot-six mummy, a mute Shaolin monk with anger-management issues, and the only guide left to lead them.

Three Journeys: separate but joined. One mission: to save forever.

But first they have to save themselves.